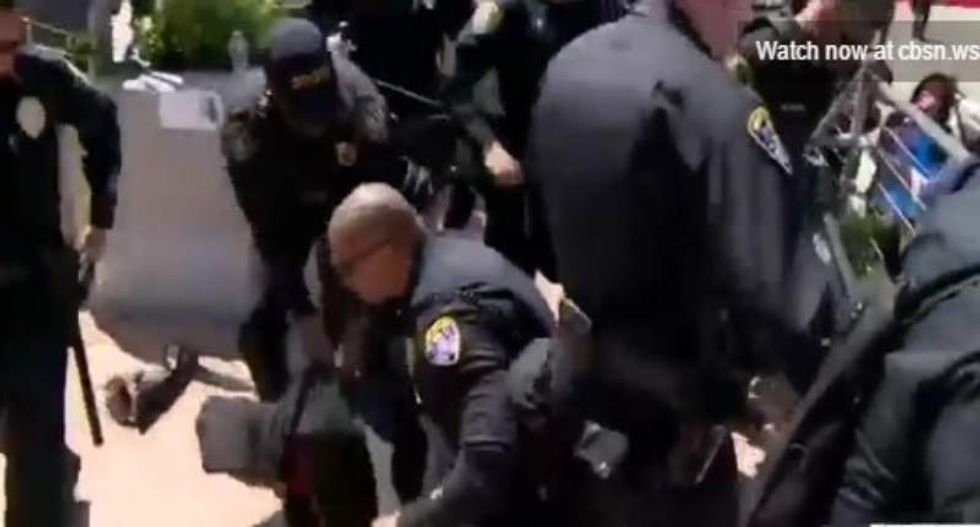 Donald Trump brought his message of walls and deportations to the doorstep of America’s busiest border crossing on Friday as the presumptive Republican presidential nominee greeted supporters in San Diego, California, amid one of the largest counter-demonstrations organized against him.

Inside the San Diego Convention Center was a relatively placid scene for the rally, while outside demonstrators against Trump's controversy-riddled White House bid marched and chanted, carrying signs criticizing Trump's message against illegal immigration.

Waving U.S. and Mexican flags, more than 1,000 people turned out to protest Trump San Diego, a city which sits just 15 miles from the Mexican border city and where a third of residents are Latino.

Video posted on social media sites showed protesters attempting to breach a barrier set up by police, climbing over railings and throwing objects at officers, who used their night sticks in an attempt to hold back the crowd.

At least one arrest was made.

Trump has weathered months of blowback from all ends of the political spectrum for his immigration policy, which calls for the building of a wall on the U.S.-Mexico border and deporting the nearly 11 million undocumented immigrants in the country.

Critics have said his plan is needlessly cruel and impossible to implement. At Trump's campaign stops, attendees often chant "build the wall."

Friday was not the first time Trump has been greeted by civil unrest in California, which is home to the largest Latino population in the country. Late last month, a visit to the California Republican convention set off days of protests in the area, leading to several arrests.

The protest is being streamed live, and can be seen below.