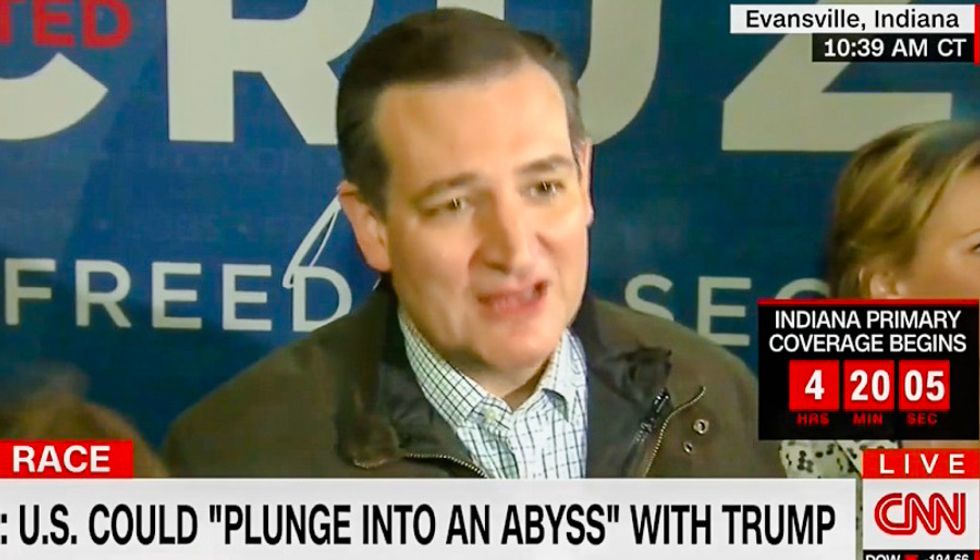 Republican presidential frontrunner snubbed NBC News correspondent Hallie Jackson on Tuesday after she tried to get a straight answer about whether or not he could support Donald Trump if he's the eventual GOP nominee.

Over the weekend, Cruz had repeatedly dodged Meet the Press host Chuck Todd's attempts to confirm that he would stick to his earlier pledge to support the Republican nominee -- no matter who came out on top in the primary.

When Jackson, who has been embedded with the Cruz campaign for months, tried to ask the same question on Tuesday, Cruz was less polite.

"These are some of the strongest words you've used against Donald Trump yet," Jackson told the candidate at a press conference in Evansville, Indiana. "You know I've been with you, I've heard you talk about him. Today feels different for you."

"So, I'm going to ask you a question and you're going to say that I sound like a broken record," she continued before being interrupted by Cruz.

"You sound like a broken record," he quipped. "Someone else have a question?"

"But no," Jackson pressed. "Why not say once and for all?"

"Will you support him as the nominee?" Jackson asked. "I don't understand why you won't answer the question, Senator. If you think he's a liar... If you say he's a pathological liar, and you say that you can't..."

"But why not definitely say," the reporter tried once more.

Cruz, however, refused to acknowledge her and move on.