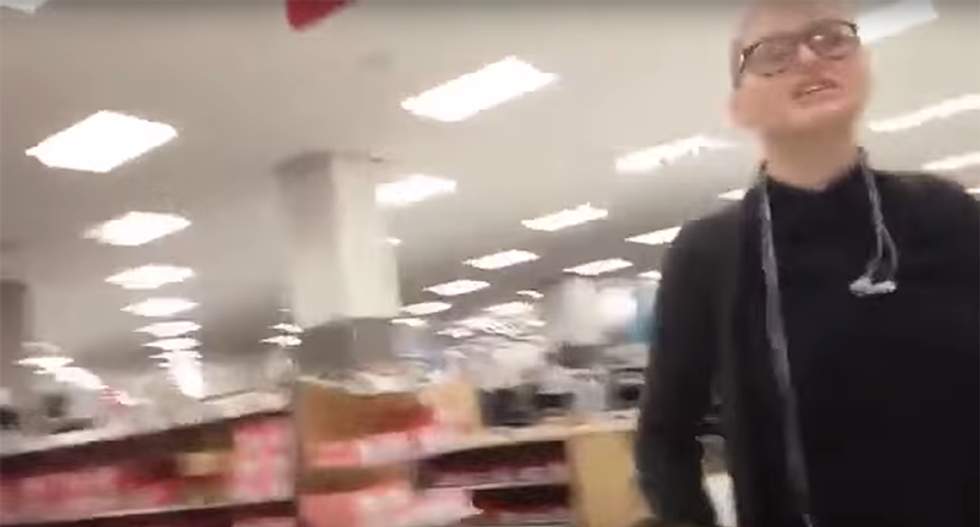 A transgender Target shopper fought back against a right-wing Christian protester who was shouting homophobic insults because Target allows transgender people to use the bathroom that matches their gender identity.

In the video found by JoeMyGod, the protester can be heard off camera shouting, “Do not come to Target! They let transgender people in the bathroom.”

The transgender customer happened to be nearby and approached the protester. “Yeah, and you know what, there’s a transgender person right here so you can just keep on walking,” he shouted.

The protester makes an about-face to shout at the customer, “That’s okay, you’re going to go to hell!”

The trans customer retorts back to the homophobe, “And you’re going to be an a**hole for the rest of your life!” The Target shopper also criticizes the gender flub: “Trans men aren’t women, a**hole.”

That's when the protester berates all homosexuals because, in his eyes, they're all transgender people. “Homosexuality is not okay with God," he shouts. "Homosexuals are only 2 percent of the world’s population, but they take up 90 percent of the HIV. Some safe lifestyle that is, right?”

He then cites disproven myths that "bathroom predators" are being authorized by Target and their policies. “Kids have been having their pictures taken in Target bathrooms by pedophiles because Target makes it okay for grown men to put on a dress and go in the same bathroom as your daughter.”

He was ultimately escorted out by police while shouting, “Jesus Christ was not friends with any homos! I’m sorry to tell you guys that!”