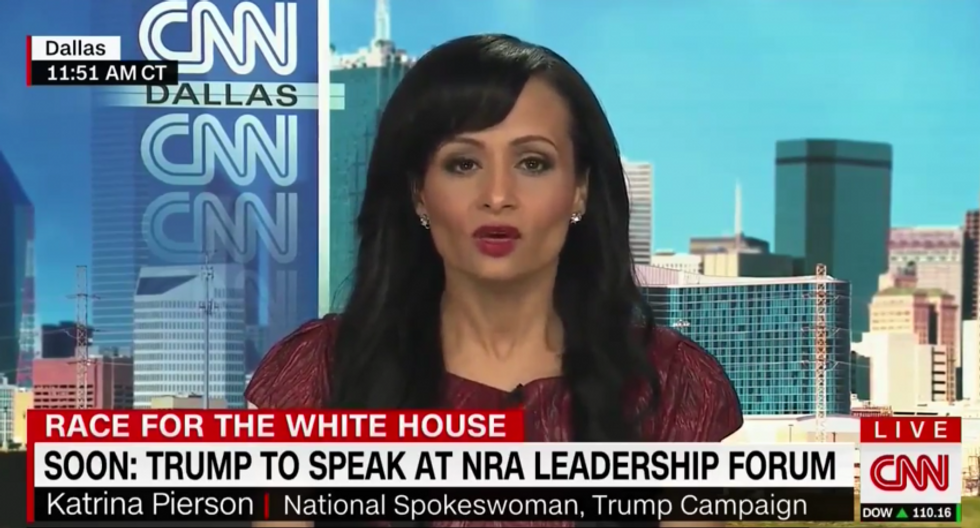 This hasn't been a great week for Donald Trump spokespeople, and Trump spokeswoman Katrina Pierson added to the carnage on CNN Friday morning when she deflected a question about Trump's proposed ban on Muslims entering the United States by trying to blame Bill Clinton for the 9/11 terrorist attacks.

It all started when CNN Legal View host Ashleigh Banfield asked Pierson to explain why Hillary Clinton was "dumb" for calling out Trump's proposal to ban Muslims from entering the U.S. for an indeterminate length of time.

"Well, I’ll have to agree with Mr. Trump to say it is the dumbest statement I’ve heard, particularly when we look at what’s happened in the world," Pierson responded. "It was then Bill Clinton who admitted back in 1996 he knew Bin Laden wanted to commit crimes against America and did absolutely nothing. More importantly, we had open borders, a lax visa system. We were nice. Our tone was welcoming. And guess what? 9/11 happened."

Clinton did admit that he could have killed Bin Laden in 1998 but chose not to because it would have required killing hundreds of other innocent people who were in the vicinity. And by the time 9/11 actually did happen, Clinton was powerless to stop it, because he hadn't been president for eight months.