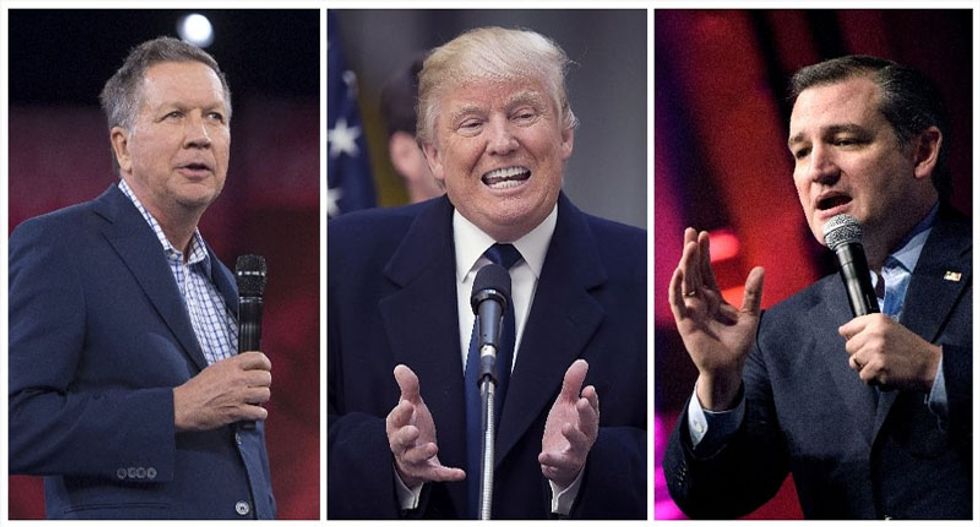 Voters went to the polls in Indiana's presidential primaries Tuesday, with Donald Trump hoping to knock out his rivals for the Republican nomination and Hillary Clinton seeking to further cement her status as the Democrats' presumptive nominee.

Voters trickled in to cast their ballots after polling stations began opening at 6 am (1000 GMT), setting in motion a day of reckoning for the movement to "stop Trump" led by Texas Senator Ted Cruz.

The Young Turks are also covering the results live. Their show can be seen here.

"We have to put him away tomorrow folks," Trump told a crowd in South Bend on the eve of the vote.

A new NBC poll showed Trump 15 percentage points ahead of Cruz, fresh evidence that the Texas senator's bid to block Trump was under threat.

Clinton and her rival, Bernie Sanders, were locked in a closer race in Indiana.

The former secretary of state is already so far ahead overall that the Vermont senator's only hope now lies in the unlikely scenario of her failing to win a majority of delegates in the primaries, in which case her nomination could be contested at a Democratic convention in July.

Cruz was counting on Indiana acting as a Trump firewall, blocking him from receiving the 1,237 delegates necessary to secure the nomination at the Republican convention in Cleveland in July.

Mathematically eliminated from winning outright, Cruz's goal is to snatch victory on a second ballot, when most delegates become free to vote for whomever they choose -- but which will only be held if Trump falls short of a majority.

Trump has so far amassed 1,002 delegates, according to CNN's tally. He needs just under half of the 502 in play in the remaining 10 contests to lock in the nomination.

The map currently favors the billionaire, who is polling well ahead in the largest states yet to vote, California and New Jersey.

With momentum favoring Trump -- he has won the last six contests -- Cruz put on a brave face, telling reporters he would stay in the race regardless of the Indiana outcome.

"I am in for the distance," Cruz said. "As long as we have a viable path to victory, I am competing to the end."

The underdog endured an awkward encounter in Marion, Indiana when he engaged Trump supporters who called on him to drop out.

"You are the problem," said a man holding a Trump sign, just inches from Cruz. "Indiana don't want you."

"Are you Canadian?" one of them challenged, referring to Cruz's birth in Calgary -- a frequent line of attack for Trump.

Should the conservative senator fall short in Indiana, even his supporters see an extremely steep road ahead.

Indiana's primary awards 30 delegates to the state's winner. The remaining 27 are awarded three each to the winner of the state's nine congressional districts.

If Trump sweeps the state, "it could be over," former Cruz spokesman Rick Tyler acknowledged on MSNBC.

But if Cruz pulls off an upset, he would be strongly positioned in California, Tyler noted, citing Cruz's formidable ground game and superior organization in The Golden State, which votes June 7 on the final day of the Republican race.

Clinton, with her commanding lead over Bernie Sanders, needs only 21 percent of remaining Democratic delegates to win her party's nomination.

At a Washington news conference, Sanders insisted the Democratic race would come down to a "contested" convention, and appealed to hundreds of so-called superdelegates in a bid to grab the nomination.

These number around 700 and, in contrast to pledged delegates, they can vote for any candidate at the party convention in Philadelphia in July.

Even with a Sanders nomination a near impossibility, he insisted Monday that his focus on reducing economic inequality and the influence of "special interests and the billionaire class" in politics was resonating with voters.

Meanwhile, Trump was already looking beyond Tuesday's contest to a general election matchup with Clinton.

"And then we can focus on crooked Hillary," he said. "Please, let's focus on Hillary."

The two have clashed repeatedly on gender issues, with Trump accusing Clinton of playing "the woman card" and saying that if she were a man she'd have no chance of winning.

He inflamed the issue on Sunday, when he used coarse language in discussing trade, saying "we can't continue to allow China to rape our country."

Trump's brutal campaign trail insults have appalled many in the Republican Party.

But with Cruz disliked by many of his colleagues in Congress, and his campaign failing to rebound, there were increasing signs that the establishment nonetheless has accepted backing Trump.

Former US senator Alfonse D'Amato of New York told Fox News that more and more of his fellow Republicans were "recognizing the inevitability" of Trump.