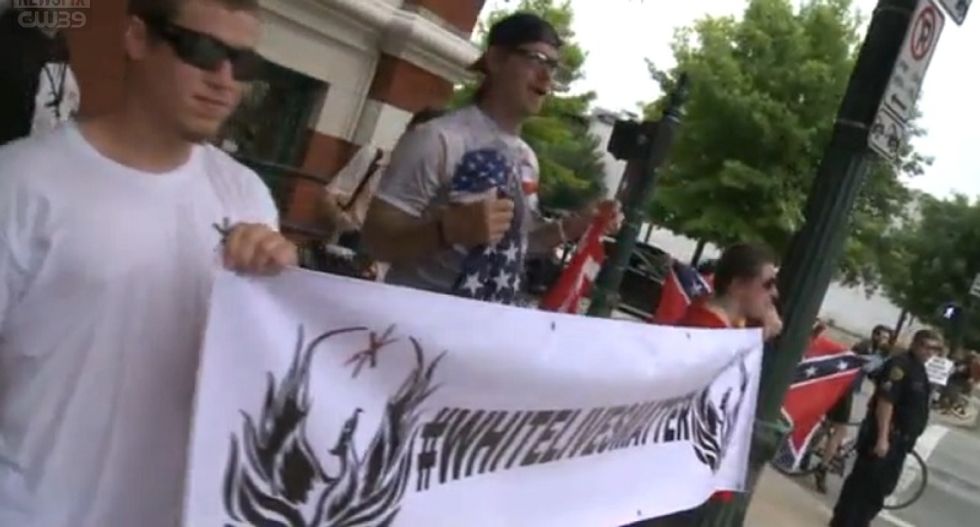 Texas protesting an Islamic center on Saturday were swarmed by counter-protesters who supported the Muslim community, the Houston Chronicle reports.

With one side carrying Confederate flags and the other chanting "Stop the hate, stop the fear, Muslim people are welcome here," the two sides squared off at the Islamic Da'wah Center. One Confederate flag-waving woman was caught on camera shouting, "White power! Fascist and proud!"

A group calling itself "Heart of Texas" organized the protest, writing on the event page, "Imagine Texas turning in a muslim ghetto full of mosques and 'Islamic Knowledge' centers. It's gettin' real."

The center opened a library on Islamic culture last month, sparking the protest.

"That's right, just days after sharia law was banned in Texas. The library reportedly cost around $2.5 million. Imagine how much our tax money went to building this shrine to hatred," the protest organizers wrote.

The Chronicle points out the library was privately funded.

"We're here to show the Muslim community that there are people of faith based and non-faith based philosophies standing in solidarity against racist bigots trying to intimidate them," Ramon Mejia, a counter-protest organizer, told CW39 NewsFix.

"The Islamic Da'wah Center position is that safety and security is paramount," he said. "Therefore, we do not support any hate rally or counter rally."

One anti-Islam protester, identifying himself as Ken Reed, wore a "white lives matter" T shirt, according to the Chronicle.

"This is America. We have the right to speak out and protest," he told the paper. "We feel Texas, our great state and the United States is being threatened by the influx of Islam."

Anti-Muslim protests are not new in Texas. Last month, protesters' plans were scuttled when they showed up at a Nation of Islam center in South Dallas and were met in-kind with armed worshipers defending their space.

Watch video from the protests, as posted by CW39, here: