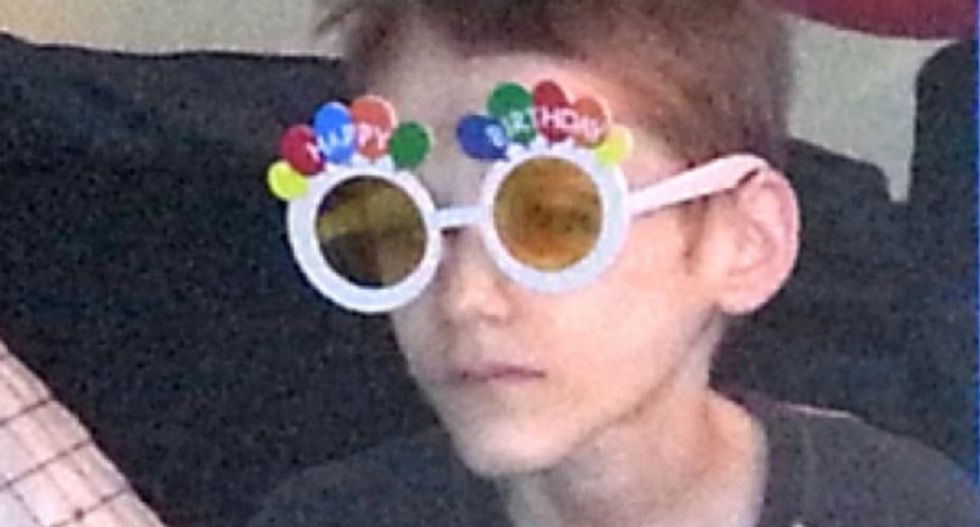 Alex Radita on his 15th birthday. He weighed 37 pounds due to untreated Type 1 diabetes (Court exhibit/CBC)

Emil and Rodica Radita are on trial for first-degree murder after their son, Alex, died in 2013 from what prosecutors say were the effects of his parents' refusal to seek medical care and rely on prayer and home treatment instead.

Alex was diagnosed with diabetes as a 3 year old. The condition can be controlled by monitoring blood glucose levels and giving insulin. But his parents believed that doctors caused the condition by treating him for it and left his diabetes untreated.

The result was that by the time Alex was 15, he weighed no more than a 4-year-old. He died at home -- but his parents believed he was risen from the dead, according to court testimony reported by the CBC. They are facing first-degree murder charges, which like in the U.S. means the culprit is accused of purposely killing another person.

Marius Citan, a member of the Romanian Pentecostal Church, testified  church members were told that Alex died overnight, but had been raised from the dead by God.

But Citan, who testified that other church members sought medical help from doctors when needed, said that when he saw the boy in his bed, he was disturbed.

"He was looking very bad," said Ciltan. "I was shocked."

While the medical examiner said she got conflicting accounts from family members, Alex may have stopped breathing hours before paramedics were called.

It was church elders told the parents to call 911. Paramedics found family and church members praying inside the home.

Over years, if left untreated, diabetes ravages the body -- but controlling it under a doctor's care with insulin can counteract its effects and allow diabetics to live relatively normal lives.

Eunice Pop, a friend of some of Alex's sisters, testified the boy was in very poor physical condition before his death. She saw the 15-year-old was hobbling down the stairs "snail slow," had swollen legs and appeared ill, the CBC reports.

Soon after his diagnosis, Alex had been seized by child services for a year after he had been hospitalized three times because his parents refused to treat his condition. But he was returned to them. They complied with a court order to treat his condition with the help of a doctor -- until they failed to show up for an appointment, the CBC reports.

The family could not be located, until they were discovered to have moved to a different province -- but there was no communication between the two social service departments.

His kindergarten teacher, Sandy Wong, said she remembers him as an impish, chubby boy with a sweet face.

"I hope that Alex's tragic death will bring about necessary changes regarding follow-up and monitoring in serious cases of neglect, when once apprehended children are returned to their parents," wrote Wong in a letter obtained by the CBC. "His life story of suffering and premature death demands that greater, more open sharing of information between provinces be implemented. The most vulnerable must be protected. I will never forget Alex's sweet face and the privilege it was to teach, support and encourage him during his kindergarten year. He is free of his suffering now and resting in peace."