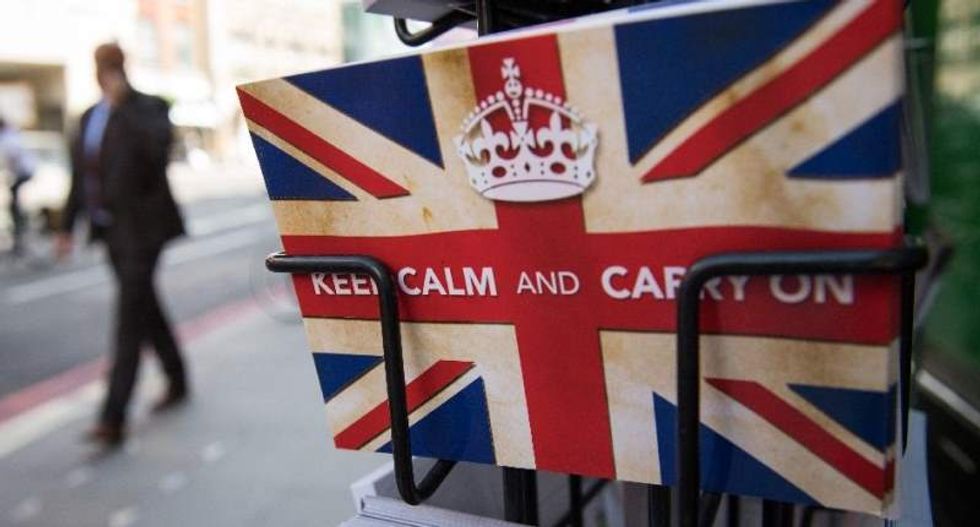 A postcard bearing the slogan "Keep Calm and Carry On" spotted on a newsstand in London. (Agence France-Presse/Leon Neal)

As the United Kingdom votes to leave the European Union, people on both sides of the Atlantic scramble to find who’s responsible. But there’s plenty of blame to go around.

The political rise of Donald Trump and the United Kingdom’s withdrawal from the European Union are distinct national events driven by disparate historical, social, and economic forces. But they’ve got enough in common that a lot of people have wondered if the same sentiments aren’t behind them both. Unfortunately, it’s far too easy for smug Friday morning know-it-alls to heap scorn on easy targets: racism, nationalism, white people, old people, and other flavors of frightened conservatives. But in Brexit, as in the 2016 U.S. presidential election, this analysis is false comfort food full of empty calories; it fills you up with self-righteousness but makes you forget you’re being presented with an extremely limited menu.

Late last night, as the Brexit votes were still being tallied and the early appearance of a Remain victory were just beginning to curdle into the ugly truth of a win for Leave, Chris Hayes of MSNBC and The Nation posted a very precise and perceptive summary of the false binaries we face on Twitter: “I don’t want a future in which politics is primarily a battle between cosmopolitan finance capitalism and ethno-nationalist backlash.” This perfectly states the problem not only of Leave vs. Remain, but also of Clinton vs. Trump and many other political struggles of this dismal year: we’re not being shown real alternatives, or given genuine choices. We’re simply being asked to continue down the same neoliberal path that has left so many people out in the cold, or to send them a message by supporting deranged and ignorant nationalist demagoguery.

Let’s be clear: Brexit is a bad idea. It’s going to hurt a lot of the very people who voted for it, and most certainly a lot of ugly instincts were behind it – instincts that predatory villains like UKIP’s Nigel Farage knowingly played on. And just as surely, Donald Trump is a horror of a presidential candidate, a capering clown stuffed with money and ego who doesn’t know anything about how to run a country and doesn’t care. His election would be an unmitigated disaster for everyone, everywhere. But in both situations, voters are given false choices: stay or go, Trump or Clinton. Deeper class analysis was ignored; reform was never taken seriously; and bad choices soon became only choices. The nightmare prospect of a Trump candidacy was used to silence any criticism, however justifiable, of Hillary Clinton and the Democratic Party, and the devastating fallout of a British exit was used to ignore the years of bad government and austerity politics that led to it in the first place.

On a dull day when things look as bleak on either side of the Atlantic, it’s a good time to examine our assumptions and figure out how we can open ourselves up to something more than false choices and empty blame.

The working class, both in the U.S. and in the U.K., has really taken it in the neck for the last few decades. Left out of the equations that add up to billions for the urban elites, they’ve seen their share of the economic picture dwindle to practically nothing. There’s no need to repeat here the endless statistics about wealth disparity and income inequality, or to note that austerity policies have destroyed social safety nets and cost far more than the British exit ever will; but maybe it’s time to stop lecturing people about ‘voting against their own interests’ and start wondering why they’re doing it. What, exactly, do you think the interests of these voters are? Why don’t they think they’re getting it from establishment liberals, and why do they think they’ll get it from the likes of Trump and Farage? If you think they’re going to benefit more from your chosen outcome, whether it’s a Clinton presidency or a Remain vote, maybe you should do a better job of proving it. Twenty years of neoliberal politics in America hasn’t done much in that regard. As author Freddie DeBoer tweeted yesterday, “If we don’t constructively address this justifiable disgust with elites and the status quo, sooner or later nativist demagogues will win.”

Again, it can’t be denied that racism, anti-immigrant sentiment, xenophobia, and other reactionary mindsets played a part in both Brexit and the rise of Donald Trump. But if your reaction is like that of Cosmo columnist/Clinton booster Jill Filipovic, who this morning chided “the reactionary choices of angry old white people”, what’s your endgame? How are you helping? What’s your solution: denying old white people the vote altogether, or, like Barney Frank, simply writing them out of the national narrative because they’re not going to invent solar panels and make a lot of start-up money for someone? If the choice you give people is wealthy liberal elites who give them nothing and scold them for being backwards morons, or wealthy conservative elites who give them nothing but at least lie about being on their side, don’t be surprised if a lot of them choose the latter. As Vox editor Emmett Rensin put it, “Liberal managers should consider that austerity plus ‘you’re a dumb racist’ isn’t a winning strategy.”

3. Look for the snakes in the grass

All that said, this isn’t an excersise in ‘both sides do it’. The lack of a clear hero doesn’t mean there’s not a much more clear villain. It should go without saying, particularly in Europe, that no one should be listened to lying, conniving, nationalist demagogues, and yet here we are. Nigel Farage has already taken advantage of UKIP’s post-Brexit victory lap to admit that the numbers he used to argue for withdrawal were bogus, and that his plan for funneling E.U. money into the National Health was nothing but a lie. Donald Trump has managed to score some pretty good points off of Hillary Clinton’s lack of empathy for the working class, but he won’t do anything whatsoever to help them if he gets into office; he’s just using them as a cudgel to beat on his opponent, and if he wins the White House, he’ll continue his lifelong habit of not caring one bit about anyone not named Donald Trump. The Brexit vote has already spurred French crypto-fascist Marine Le Pen to suggest a similar vote in France, and there are also stirrings of similar departures in Greece, Italy, and elsewhere. Ethnic nationalism has been a relentless disaster for Europe, precipitating two world wars, and Trump is doing his best to import it to the United States. The true tragedy of the weakness and compromise of the neoliberal position is that it makes a truly unacceptable alternative look less menacing.

It’s easy, on a day like this, to second-guess every decision. We’ve all seen the Mancunian Brexit backer being interviewed on the BBC, seemingly shocked that his vote actually counted. We’ve seen Nigel Farage proudly admit his numbers were just lies, and Donald Trump hype his golf course and pretend that he knew or cared anything about the E.U. referendum. It’s important to take things at face value, and sometimes a snake is really just a snake. But there’s more than one way to play the fool. Many liberal Democrats, like Clinton advisor/Center for American Progress head Neera Tanden, have used today as a get-out-the-vote opportunity, urging “progressives” to “go register voters this weekend”. Tanden is playing people for a sucker no less than Farage; she knows that voter turnout in general wasn’t really an issue in Brexit, and she also knows that her candidate, who’s taken plenty of heat from progressives for her economic and foreign policy stances, is now the only game in town. Instead of moving her platform further left, she’s just trying to shore up the numbers. Cynics about at the top of every movement; it’s more important than ever to know when you’re being swindled.

Most importantly, it’s time to change the game. It’s time to abandon the bad vs. worse narrative, to stop picking the lesser of two evils, and to start thinking outside of this false binary. The perfect may be the enemy of the good, but it’s also the enemy of the bad; it’s time to hold the feet of the less-bad to the fire. We’ve got a lot of damage control to do, both in restoring the confidence of British citizens in communality and in keeping understandably frustrated American voters from making a similar mistake. But the goal isn’t just to keep people from the worst possible screw-up. The Democrats and their British equivalents have had plenty of years, good and bad, to spread the wealth, to share the riches being stockpiles at the top, and to make sure everyone benefited from the money their friends in high places were making. Instead, they stuck with false notions of austerity, welfare ‘reform’, privatization, deregulation, and rent-seeking – and they wonder why people who got left out aren’t listening anymore. We can have a populism based on exclusion and hate, or one based on inclusion and solidarity. It’s time to start the hard work of fixing our countries, not just fixing the blame.