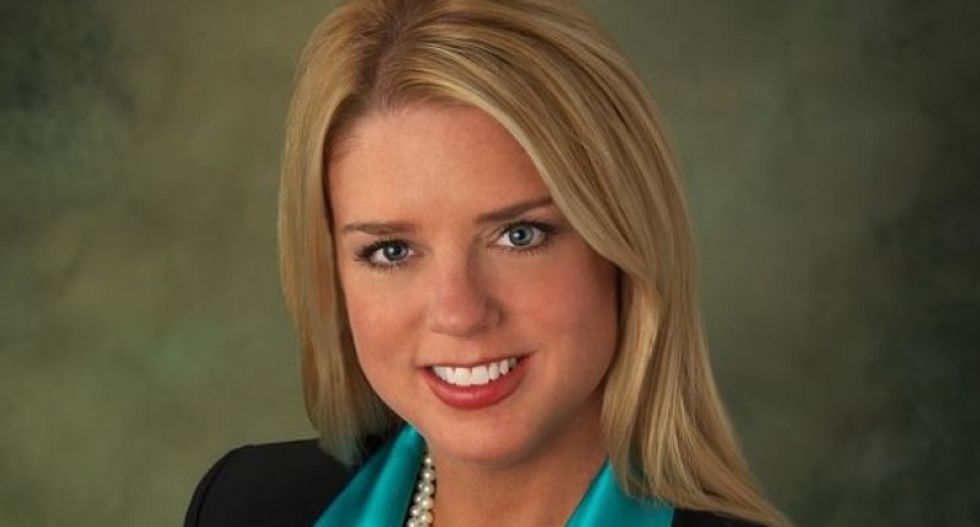 Bondi asked for the contribution before publicly announcing she would join a New York state suit against Trump U. Four days later, she received a check from Trump's foundation. Bondi subsequently announced she was no longer suing Trump, citing insufficient grounds to proceed.

The check was in the amount of $25,000, and the donation was in violation of rules governing political activities by charities.

A spokesman for Bondi told the Associated Press that she was "unaware" of the dozens of consumer complaints levied against Trump's seminars before she asked for the donation in 2013.

The AP reports that the timing of the donation is note-worthy, because Trump has bragged about expecting to get favors from politicians when he donates money to them.

For example, at a rally in Iowa in January, the AP quotes Trump as boasting, "When I want something I get it. When I call, they kiss my ass. It's true."

Federal law, according to the Washington Post, makes it illegal to solicit money with the intent of being influenced in official actions.

New York Attorney General Eric Schneiderman, along with a federal class action lawsuit in California, accuse Trump of defrauding students of $35,000 each with promises of real estate education they either didn't receive or found useless, the AP reports.

Though Bondi claimed ignorance about the complaints, the AP also obtained thousands of pages of consumer complaints against Trump U, largely owned by Trump himself, which were filed with Bondi's office. More than 20 people filed complaints with the Florida attorney general, many saying they paid for training materials which were never received.

"I was laid off work for the first time in my life and really need this money to support my family," one man pleaded, seeking a refund. "$1,400 is so much money for my family."

Bondi's isn't the first case in which a Republican attorney general has been accused of dropping a case against Trump U in return for campaign contributions.

Last week, the AP reported that then-Texas Attorney General Greg Abbott -- who is now the governor -- received a $35,000 campaign contribution from Trump three years after dropping a proposed 2010 lawsuit against Trump U. After the AP reported the story, former Texas Deputy Chief of Consumer Protection John Owen said the case was dropped for political reasons.

The AP points out that when the attorneys general dropped the lawsuits, they left consumers in their states on their own to try and collect their refunds from Trump.

Both politicians have endorsed the celebrity businessman in his presidential bid.