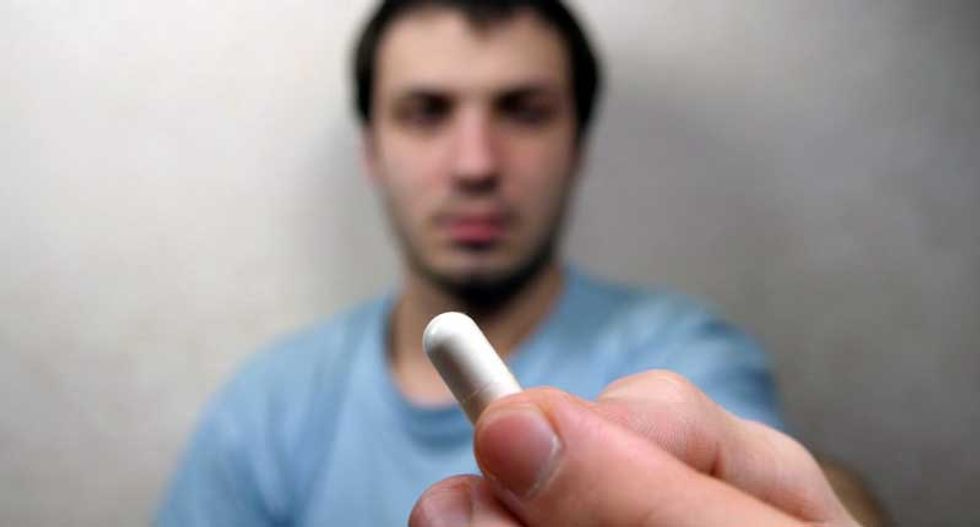 The prescription opioid epidemic is not new. It began when Pharma rolled out and aggressively marketed time-released opioids like Oxycontin, driving “pill mills” that distributed as many as 9 million Oxys in a six-month span. What is new is the media finally calling Pharma out on the many cagey ways it got people hooked on opioids and heroin (and continues to do so), how the FDA unabashedly helps Pharma with shocking new approvals, and how people in real pain, especially the poor and African Americans, are some of the hidden victims of the epidemic. When all the reports are in, the Pharma-driven opioid epidemic may be one of the biggest and deadliest cons in recent history.

Your Patients Won’t Get Addicted, We Promise!

When Purdue Pharma and other Pharma companies began to aggressively market opioids for even minor pain, promising practitioners they were not addictive, it had been decades since the need to tightly control narcotics had been the mandate. Many newly graduating doctors, young medical professionals and their patients did not remember the opiate addictions of the 1930s, '40s and '50s and the many U.S. troops who got hooked on heroin in Vietnam. (Certainly no one remembered the notorious opium dens of early America.) Why should these drugs be so highly restricted, said Pharma, banking on the U.S.’ short memory. Why should they be restricted to short-term surgical pain, accidents and treatment of cancer and terminal pain conditions?

The misinformation was abetted by a perverse pro-opioid movement of users who claim the real problem is the media’s “misunderstanding” of opioids and overly tight controls on the pills. (After all, you are never addicted until your source is cut off.)  Such vocal defenders are not a coincidence. They are the result of Pharma’s deliberate, multimillion-dollar campaigns to cast chronic pain and other nonmalignant pain conditions as requiring opioids and Pharma’s thriving parallel addiction business. Twenty years ago, none of the pain conditions now presented as requiring opioids would have been presented that way. Nor were between 40 and 52 people a day dying from opioids.

The picture is worsened by the fact that there are no studies showing that prescribing long-term opioids for chronic pain is effective but there is evidence it makes pain worse.

Between 1996 and 2002, Purdue Pharma “funded more than 20,000 pain-related educational programs through direct sponsorship or financial grants and launched a multifaceted campaign to encourage long-term use of [opioid painkillers] for chronic non-cancer pain,“ reports Vox Media. Included in the monetary persuasion was financial support to the American Pain Society, the American Academy of Pain Medicine, the Federation of State Medical Boards, the Joint Commission, pain patient groups, and other organizations, writes Vox, which in turn “advocated for more aggressive identification and treatment of pain, especially use of [opioid painkillers].

The American Geriatrics Society also drove the opioid epidemic. In 2009, it changed its guidelines to recommend opioids for “all patients with moderate to severe pain," before over-the-counter pain relievers, such as ibuprofen and naproxen. Half the panel's experts "had financial ties to opioid companies, as paid speakers, consultants or advisers at the time the guidelines were issued," investigative reporter John Fauber reports. The University of Wisconsin's Pain & Policy Studies Group also took $2.5 million from opioid makers even as it pushed for looser use of narcotic painkillers, he reports.

A pain guide supported by the American Geriatrics Society and funded by Janssen (which makes Duragesic, Ultram ER and Nucynta) claims that opioids "allow people with chronic pain to get back to work, run, and play sports," and describes worries that patients may need increased doses of opioids over time as a "myth.”

The guide omits opioid risks but cites "disadvantages" for ibuprofen (Advil) and naproxen (Aleve). While over-the-counter pain meds certainly can cause stomach bleeding, opioids cause hormonal changes, constipation, a decrease in immune responses, fracture risks, liver and kidney risks, cardiopulmonary, pulmonary and congestive heart problems, sleep apnea, mental problems and even death in those who combine them with other drugs. Which would you take?

Another lobbying example is the drug company-funded group IMMPACT, whose stated goal is “improving the design, execution, and interpretation of clinical trials of treatments for pain.” One of the improved designs it recommends is “enriched enrollment”—elimination of non-responders and subjects who don’t tolerate a drug before the clinical trial begins. Both Purdue and Janssen have acknowledged how useful the lobbying group has been to them. Of course “improving” clinical trial procedures lowers drug company trial costs and heightens the chance a drug candidate is approved.

Why OxyContin Hooks and Kills

Some pills are more addictive than others, and the difference often boils down to half-life—how long the drug remains in your system. When a drug with euphoric and psychological effects (like opioids or benzodiazepines) leaves the body rapidly, there are often withdrawal effects. The classic example of withdrawal of a short-acting substance is the alcohol hangover. Alcohol leaves the body so quickly there can be tremors, shakes, anxiety, and in alcoholics, seizures. (That is why alcohol withdrawal is treated with long-acting drugs that exert some of the same effects on the body as alcohol but leave more slowly.) Xanax is considered the most addictive of the benzodiazepines because it has the shortest half-life—after only about six hours the drug leaves the body and the person craves more.

In a recent expose by the Los Angeles Times that looked at thousands of Purdue emails, memos, meeting minutes, sales reports, FDA records, patent records and journal articles over many years, Oxycontin’s notorious addiction numbers stem from this same phenomenon. Purdue Pharma deliberately marketed Oxycontin as a 12-hour med—providing pain relief for 12 hours, the company said, and only requiring a twice-a-day dose. Records now show that Purdue knew the claim was a lie, as did its sales reps, patients, medical professional and even regulatory authorities. At best, Oxy only provided eight hours of pain relief exposing patients to returning pain, withdrawal symptoms and dangerously inadequate care.

Purdue sales reps also gave prescribers Oxycontin fishing hats, stuffed plush toys and music compact discs (“Get in the Swing With Oxycontin”) in shameless promotions that were "unprecedented for a schedule II opioid," says a paper in the American Journal of Public Health.

Why wouldn’t Purdue just admit the misrepresentation instead of exposing patients to pain, withdrawal symptoms, addiction and the danger of escalating dosages? In a letter to the FDA, Purdue lawyers said the reason they maintained the fiction was “Purdue hadn’t submitted studies to the FDA to support more frequent dosing, the FDA had approved Oxycontin as a 12-hour drug, and 12-hour dosing was more convenient for patients,” says the Times. A higher dose rather than a more frequent dose also made more money for the company even though higher doses are more likely to cause death.

Who is Purdue? According to the LA Times, the Sacklers, “a New York family of physicians and philanthropists” whose name “adorns a wing of the Metropolitan Museum of Art and several galleries in the British Museum” bought Purdue in 1952. The Sacklers main source of revenue until the 1980s was a morphine pill for cancer called MS Contin. Oxycontin was concocted to ensure revenues when MS Contin’s patent ran out—also widening the market to non-cancer uses. “We do not want to niche Oxycontin just for cancer pain,” Purdue meeting minutes say. Purdue has reaped at least $31 billion from the marketing maneuver, says the Times.

While time-release opioids were created to discourage addict behavior in patients which could erupt every time the effect of short-acting opioids wore off (and to protect patients from possible liver damage from Tylenol and other drugs added to short-acting opioids), drug users and drug abusers soon found they could crush and snort long-acting opioids and even shoot them like heroin.

As the opioid addiction epidemic grew, Pharma complied with FDA directives to create abuse-proof versions of Oxycontin and other long-acting drugs while continuing to wave through opioids that were still "abusable." On the same day in 2013 that the FDA announced its new Vicodin restrictions, it approved the long-acting drug Zohydro made from hydrocodone bitartrate which has five to 10 times the abuse potential of Oxy.

The FDA did so over the warnings of many medical and public health groups and its own advisory committee.

In 2014, the FDA approved Tarrginiq ER while admitting it could still cause overdoses and euphoria. In 2015 the FDA approved opioids for children as young as 11. Opioids like fentanyl, Actiq and Zydone, a long-acting hydrocodone, are not abuse-deterrent and public health officials and pain experts are baffled by the FDA's apparent tin ear to the national opioid problem. In March, the FDA  "encouraged" opioid makers to develop abuse-deterrent versions of their drugs.

In an even more amazing move that promotes rather than restricts opioids, in April Congress passed and President Obama signed a law that actually curtails Drug Enforcement Administration powers to pursue pharmacies and drug wholesalers thought to be fanning the opioid epidemic.

“I’m shocked that Congress and the president would constrain DEA from taking on corporate drug dealers in the midst of the worst addiction epidemic in U.S. history,” said Andrew Kolodny, the director of Physicians for Responsible Opioid Prescribing and an addiction specialist. “This law allows opioid distributors to reap enormous profits and operate with impunity at the public’s expense.”

Why would the government consign more users to abuse, addiction and possible death? Congress is taking the considerations of "deep-pocketed chain pharmacies such as CVS and Walgreens and drug distribution companies like Cardinal Health and McKesson" into account, says the New York Times.

Victims Include Those in Pain

The toll of Pharma's wide marketing of opioids and the breadth of FDA approvals is not just on those who have become addicted (and have even become addicted to the treatment drugs like Suboxone). People in acute pain are often thought to be abusers and are denied opioids, especially when they are poor or minorities.

"People who are poor, African American or both are less likely to be prescribed opioids for pain than well-off white patients," reported Reuters. In one study, "46 percent of white patients with moderate or severe pain were given opioids, compared to 39 percent of black patients. And 45 percent of non-Hispanic people received the drugs, versus 40 percent of Hispanics."

Even black children with acute appendicitis, a painful emergency, are less likely to be prescribed painkillers in the emergency room than white children, researchers reported on NBC news. And while the Western world struggles with too many opioids and addictions, people in terrible pain in poor countries often go without opioids altogether.