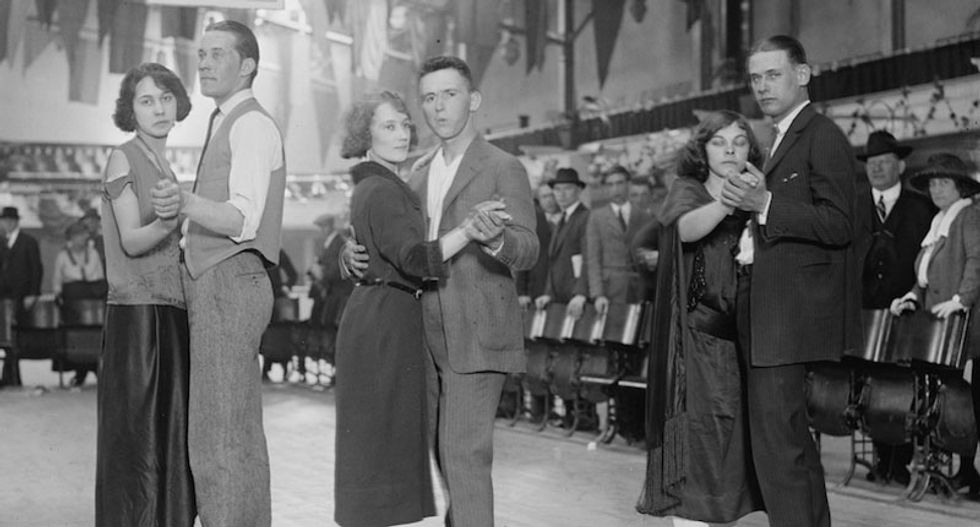 It’s possible that no one was particularly alarmed when Homer Morehouse stumbled off a dance floor and collapsed in North Tonawanda, New York on April 14, 1923. Morehouse, 27, had been dancing with his partner for 87 consecutive hours without a break. Men and women of weaker constitutions had been broken in only a fraction of that time; others were held up by their companions as they slept on their shoulder, their feet continuing to move in an automatic, semiconscious shuffling motion. When they finally fell to their knees, rest and hydration usually restored them.

Morehouse was past convalescence. He was not breathing. The official cause of death was heart failure. The unofficial cause was death by fad.

The dancer was one of thousands of participants to push the limits of his body and mental state in dance marathons, a curious attraction born in the 1920s that was twisted into a cruel spectacle by the 1930s. Initially, contestants would perform actual dance moves; by the time the weight of the Great Depression rolled in, the real appeal was in seeing which of them could withstand exhaustion, hallucinations, fistfights and unscrupulous promoters long enough to be crowned a “winner.”

Though a kind of pioneer, Morehouse had only endured the equivalent of a stroll around the block. Before it was over, dancers could be on the floor for over four months at a stretch—more than 2,800 hours of the world’s longest, most sadistic reality show, all for the purpose of comforting the country’s millions of unemployed by showing them someone was worse off than they were.

The beginning of the 1920s brought with it a growing fascination with eccentric records. A couple held a kiss for 96 hours, the world’s longest; young men would climb atop poles and sit on the narrow tip until someone declared they had done it longer than the last person to attempt it; women knitted for a week straight. It was more or less harmless, and more or less the kind of fleeting celebrity enjoyed by the Chewbacca Moms of the present day.

With a growing number of dance halls springing up across the country, it was inevitable that dance would shortly join the marathon activities. Though competitions had been held as early as the 19th century here and abroad, it wasn’t until a dance instructor named Alma Cummings exhausted six male partners in 27 consecutive hours of high-energy gyrating that the New York Times would start to describe the competitions as an “epidemic.”

The marathons of the 1930s featured many of the same tropes of reality television: exaggerated behaviors, train-wreck moments and a Darwinian struggle to remain the last person standing no matter the odds.

Cummings retired nearly as quickly as she had debuted; it was obvious that spectators were less interested in cheering on someone sustaining technique for a few days than simply seeing how long they could loosely approximate dancing before collapsing. Typically promoted as a couples’ affair, men and women would kick each other in the shins or apply ice packs to the back of each other’s necks to stay upright. One early star, Mary Promitis, used smelling salts and tickled partners to keep them moving. Marathons lasting hundreds of hours became the norm.

Realizing the long-distance appeal of the contests, promoters began to install rest periods ranging from as little as five minutes an hour up to 15: Contestants would train themselves to rapidly fall asleep on cots provides on the sidelines of dance halls. 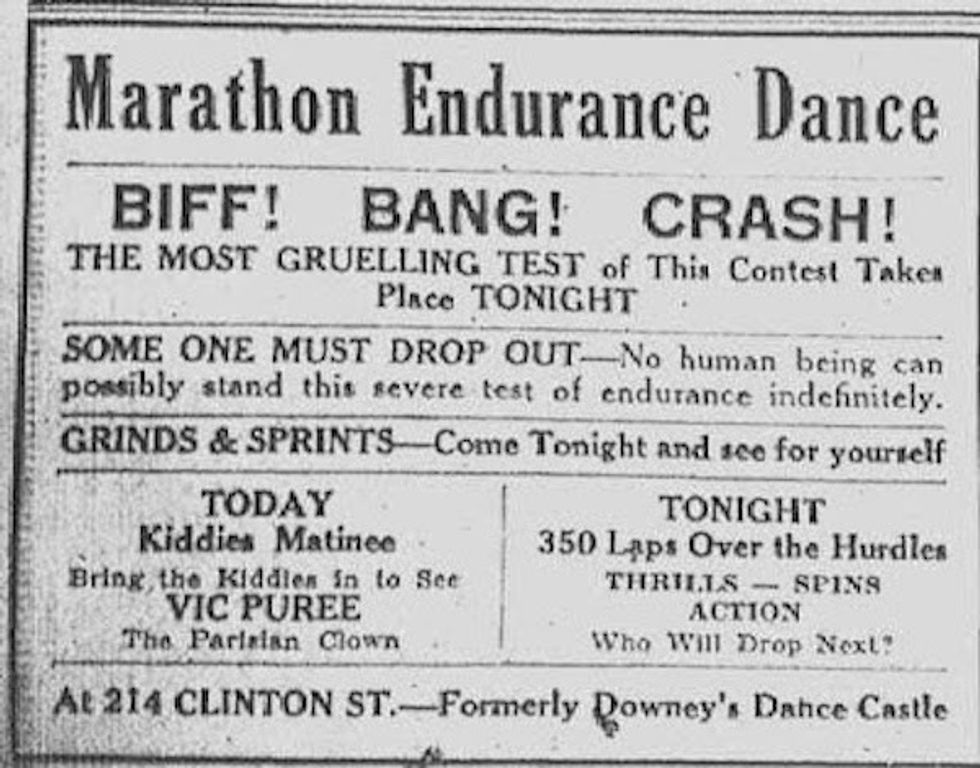 But as the length of the shows grew, so did the effects of deprivation. When bodies began to demand rest between the early hours of 2 and 7 am, dancers could often be seen plucking imaginary daisies from the linoleum floors or fleeing the building from hallucinated attackers, a manic state fans came to call “squirrely” behavior.

Their bodies went as rapidly as their minds. Even though they were moving up to 40 miles a day and ate at tall tables so they could continue to shuffle their feet, many gained weight due to the hormonal imbalance caused by their sustained wakefulness. A lack of REM sleep prompted irritability, and dancers could turn on a partner or a rival contestant in a flash.

Aside from a lack of chokes and slams, the danceathons were remarkably similar to professional wrestling.

All of this melodrama proved exciting to onlookers. By 1928, competitive endurance dancing had arrived at Madison Square Garden, inviting 91 couples from around the country to compete for a grand prize of $5,000. Promoter Martin Crandall, a former movie publicist who once mounted a fake whale head on top of Pike’s Peak in Colorado andcharged admission to prove the mammal had somehow climbed its way up, believed he’d make over $100,000 by charging $2.20 per seat.

Few people showed up in those first days — the contestants were still fresh, and therefore uninteresting. But by the second week, 12,000 people were streaming in daily to see fights, incoherent babbling, dropped bodies and men holding unresponsive partners upright by the waist.

Nine couples remained when the city’s health department shut it down. The contest had gone on for 481 hours.

With a kind of sameness beginning to creep in, the danceathons — also referred to as jitterbug derbies or walkathons in acknowledgment of how little dancing actually went on — began to dip in popularity following Crandall’s event. But the stock market crash in 1929 and the financial devastation that followed created a new and somewhat unhealthy appetite for promoted misery. With an unemployment rate of 24 percent, the jobless needed something to occupy their days. For pennies, they could witness a troupe of dancers who gradually became shells of themselves, acting as a kind of living monument to the idea that things could always be worse.

In spring 1930, a dance show in Schenectady, New York tempted entrants with a $500 grand prize and ran ads in the newspaper touting the high potential for human suffering. “No human being can possibly stand this severe test of endurance indefinitely,” read the copy. Promoter Meyer E. Davidson made use of the “grind,” similar to the sprint in high-intensity interval training, where the live band would play up-tempo music and force dancers into a frenzy. Seeing already fatigued contestants grow cross-eyed with exertion was thrilling.

When bodies began to demand rest, dancers could often be seen plucking imaginary daisies from the linoleum floors or fleeing the building from hallucinated attackers, a manic state fans came to call “squirrely” behavior.

Aside from using the restroom, everything a dancer did was considered part of the show. Cots and nurses were in full view of the crowd. Promoters encouraged — and often orchestrated — arguments, “rivalries” with other dancers, and lovers’ quarrels. Engagements and weddings were staged. Because traveling marathon companies often employed professionals, or “ringers,” to outlast local amateurs, they could also be directed to play heroes or villains. Aside from a lack of chokes and slams, the danceathons wereremarkably similar to professional wrestling.

The emcees acted as narrators, relating sob stories of couples who would use the prize money to get married. Women who played up their vulnerability or men who claimed to be military veterans were often the recipients of silver showers, where attendees would throw coins on the floor to support their favored contestants. Slips similar to racing forms would also be passed around, with information on couples meant to inform wagering.

On rare occasions, shows would stop playing music during rest periods. They quickly learned not to. In the silence, contestants were snapped out of their reverie and immediately began to wonder whether they were out of their minds. 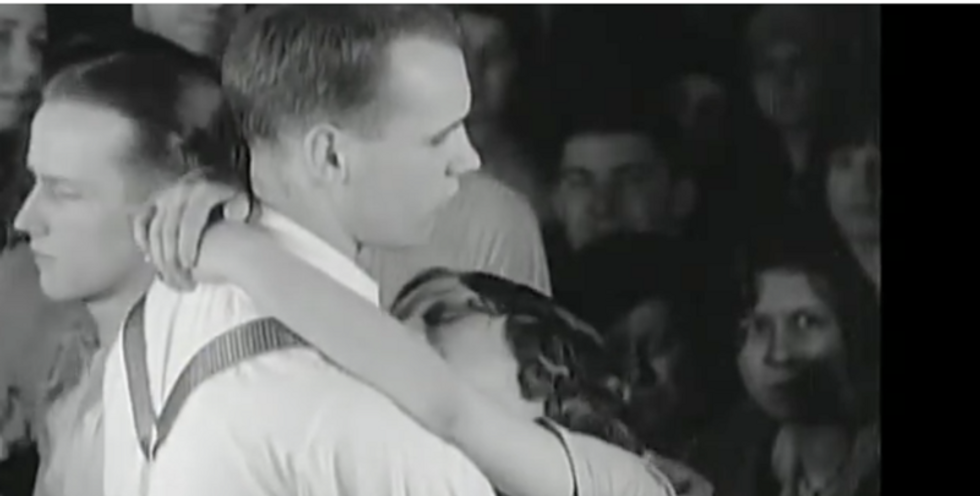 The exhaustion derbies of the mid-1930 eventually came to an end. Two major factors caused the implosion. For one, once you had seen one, you weren’t likely to want to see another. And  second,  the troupes that briefly invaded towns quickly antagonized local businesses who were competing for the scant disposable income of residents.

Movie theater operators lobbied local health departments and law enforcement to prohibit such events — being regular contributors to the economy, they had the upper hand. Local ministries and church groups were irate over the suggested sexuality of women virtually tethered to male partners. (They sometimes literally were, wearing dog collars and leashes around their wrists in another marketing stunt.) As the country’s finances improved, so did their intolerance for public displays of cruelty.

By 1935, 24 states had banned the contests outright, citing health or moral concerns. If they hadn’t, the coming war would’ve made such spectacles redundant. As morbid as the contests were, they were at least consensual and rarely threatened long-term damage: soldiers stuffed into planes and ships were headed for far worse fates.

The marathons enjoyed a brief comeback on college campuses in the 1970s, after an adaptation of Horace McCoy’s 1935 book, “They Shoot Horses, Don’t They?”, was filmed with Jane Fonda. The humiliation inherent in the events fit in with fraternity hazing and persists in several schools today.

So, too, does the public appetite for a thinly-disguised soap opera. The marathons of the 1930s featured many of the same tropes of reality television: exaggerated behaviors, train-wreck moments and a Darwinian struggle to remain the last person standing no matter the odds. It’s all in an attempt to answer the same question posed by the newspaper ads back in Schenectady: “Who will drop next?”