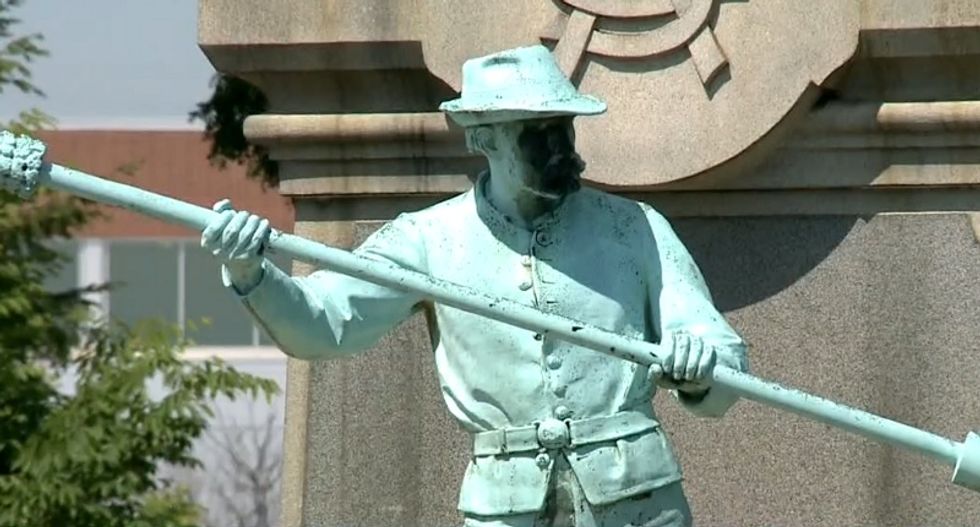 A meeting in Louisville to discuss removing a Confederate statue from a university campus went off the rails on Wednesday night, the Courier-Journal reports.

In the end, the former GOP congressional candidate and Trump supporter Everett Corley apologized to an African-American University of Louisville professor for calling him a "damn dirty black bastard" in a Facebook post that went viral, according to video posted by WHAS. U of L Professor Ricky Jones accepted his apology.

Corley's post cost him his legal representation in the court battle to keep the statue where it is. A judge ruled the statue, which sits on city property and has attracted multiple complaints, can be moved.

Corley sat quietly through the otherwise packed and lively meeting, hosted by WHAS anchor Doug Proffitt. It was clear right off the bat how inflammatory the issue had become.

"To call me or my people terrorists or terrorist-sympathizers, that is one of the greatest erasures of history ever," Jones said. Jones was targeted with death threats for his efforts.

The activist who sued to keep the statue in place apologized for some of the rhetoric but said it isn't representative of his efforts.

"Don't dishonor us by accusing my people of being racist. It's a racist term I've ever heard and I don't like it," Ed Springston, who is pushing for the statue to remain where it is, told the audience.

"I want to apologize for the actions of a rogue guy who did not have any permission from anybody to make these statements," Springston told the Courier-Journal. "What I won't accept is anybody trying to accuse my attorney, myself or the Sons of Confederate Veterans of being racist. These are people who have stood up for everybody regardless of color."

Jones, who spearheaded efforts to have the monument removed, said the pro-Confederate crowd is using Corley as a "fall guy."

He added, "If I had my druthers, every Confederate monument, memorial, statue in this country would be taken and sank to the bottom of the Pacific or Atlantic. The names change - slave traders, slave owners, knight riders, the Klu Klux Klan, the Confederates, the Sons of Confederate veterans - but the ideology remains the same."

The 121-year-old monument features three bronze Confederate soldiers. Many have been advocating for it to be replaced with a monument to Louisville native and athletic legend, Muhammad Ali.

Preservationist Martina Kunnecke argued that the removal of the statue is just lip service and the city has a poor record when it comes to actually helping its communities of color.

"This is a move to obscure Mayor Fischer's total disregard for all communities, (especially) black communities and southwestern Jefferson County," Kunnecke, who is African-American, said. "It was for them to put a face of validity that is not acceptable."

She said she was troubled by the city's removal of historic landmarks. The statue was placed on its current location in 1895, the Courier-Journal reports.

"I oppose moving anything that helps us remember how complex this issue of slavery was and how it still affects and divides us," she said.

In the end, all sides agreed on the monument being moved, but disagreed over how the solution came about, with Jones saying the pro-Confederate groups only approved of moving it after losing their court case and the pro-Confederates claiming they had always been OK with moving it to another location.

Watch the report, from WHAS, here: