Lewandowski gets destroyed on CNN for hyping Trump as Brexit expert: 'He didn't know what it was' 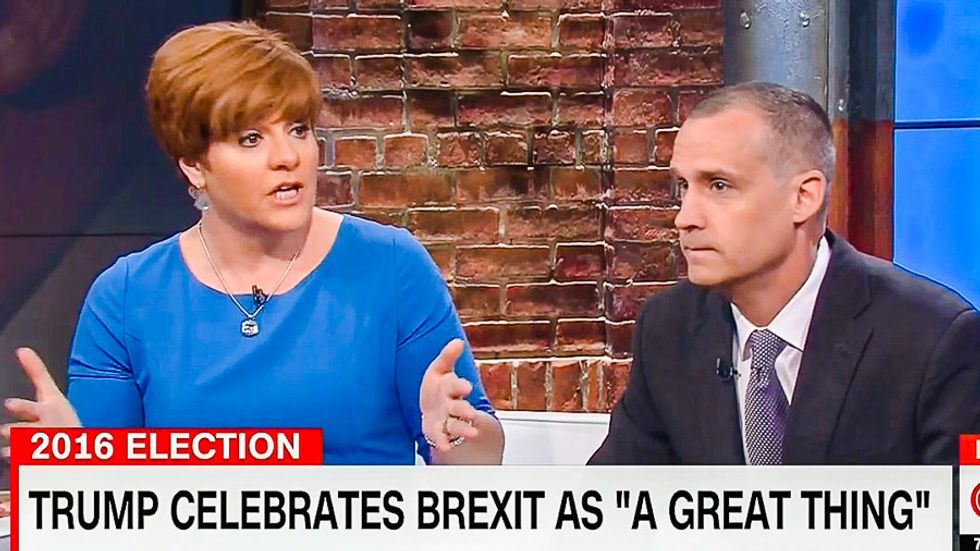 On Monday's edition of CNN's New Day, Lewandowski tried to spin Trump's proclamation that the Brexit would help business at his golf resort in Scotland.

"Obviously the U.S. dollar has become much stronger now against the British pound," Lewandowski said. "If you're going to spend money in Europe, now would actually be a good time to go with the fall of the pound."

"What you have is a world view, so what you have is someone who is saying, 'Let's look at this from the U.S. perspective. If you want to go and travel overseas -- just from a monetary perspective -- now is the right time to do that because what you're getting is more for your dollar.'"

"What he said wasn't a commentary on international markets, it was, 'When the pound goes down, more people will come to my golf course,'" she explained. "Donald Trump's main concern isn't the international markets, it isn't the impact that Brexit will have on hard working Americans 401Ks, it's himself. How can he make more money, how can he put more money in his bank account?"

Lewandowski linked the Brexit vote to "what we see here in this country" with Donald Trump's popularity in the Republican Party.

"Trump touted that he saw this coming," Quinn shot back. "That's ridiculous because when he was first asked about Brexit by the press, he didn't appear to know what it was."

"There's a revolt!" Lewandowski declared. "People are too smart, they are tired of being told what to do."

"You know what Donald Trump said about Brexit?" he added. "What he said was, you don't have to listen to me because it's not my decision. He didn't weigh in like Hillary Clinton did, like Barack Obama did, saying that you can't do this."

"Because he didn't know what it was," Quinn quipped.