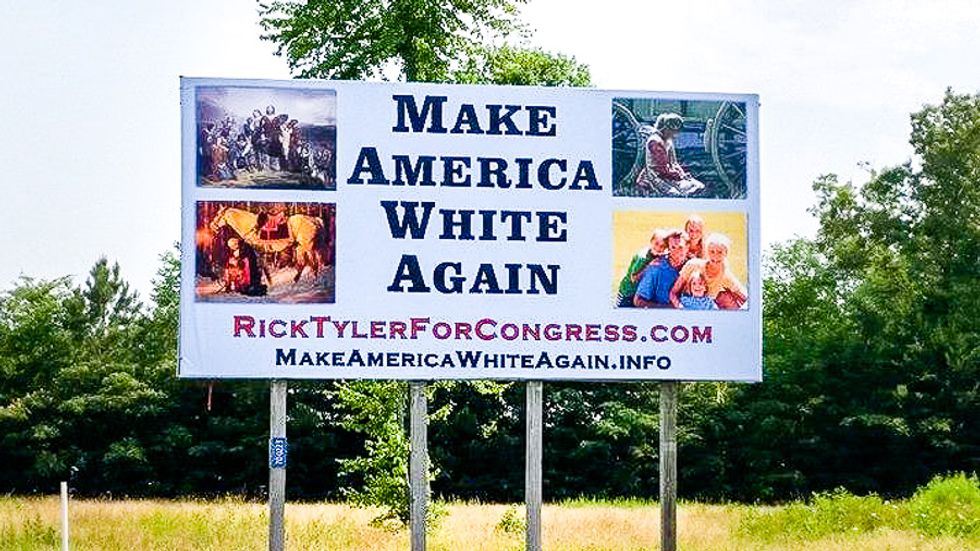 Rick Tyler, an independent Congressional candidate for Tennessee's 3rd district, is facing a boycott of his restaurant business after he advertised his candidacy with racist billboard messages like "Make America White Again."

"This disgusting bunch of bigotry was erected about 20 minutes from our house," she wrote, noting that Tyler owned Whitewater Grill in Ocoee. "Please, if you are the decent and loving people I know you to be, boycott this business."

A Web address on the billboard redirects to Tyler's campaign website, which explains that the candidate chose a sign that "is difficult to ignore and its message comes across as authoritative and influential."

Tyler also suggests that his billboard is based on Donald Trump's "Make America Great Again" slogan.

"Of great significance, as well, is the reality of the Trump phenomenon and the manner in which he has loosened up the overall spectrum of political discourse," he noted. "The Make America White Again billboard advertisement will cut to the very core and marrow of what plagues us as a nation."

A second sign used words from Dr. Martin Luther King's "I Have a Dream" speech along with an illustration of the Confederate flag surrounding the White House.

Tyler said that he planned to put up other billboards, including "Fight federal tyranny / Stop the Muslim invasion" and "Mamas, don't let your babies grow up to be miscegenators."

The candidate told WRCB-TV that he did not hate people of color, but wanted to return to a "1960s, Ozzie and Harriet, Leave it to Beaver time when there were no break-ins; no violent crime; no mass immigration."

But after the Kiwanis of Ocoee and others joined the boycott of Tyler's restaurant, the "Make American White Again" billboard mysteriously disappeared.

"THE SIGN IS OFFICIALLY DOWN!!!" Amy Hines Woody reported in a Facebook update. "Never should have been there in the first place, but at least it's gone."

It was not immediately clear if Tyler had completely abandoned his "billboard strategy."