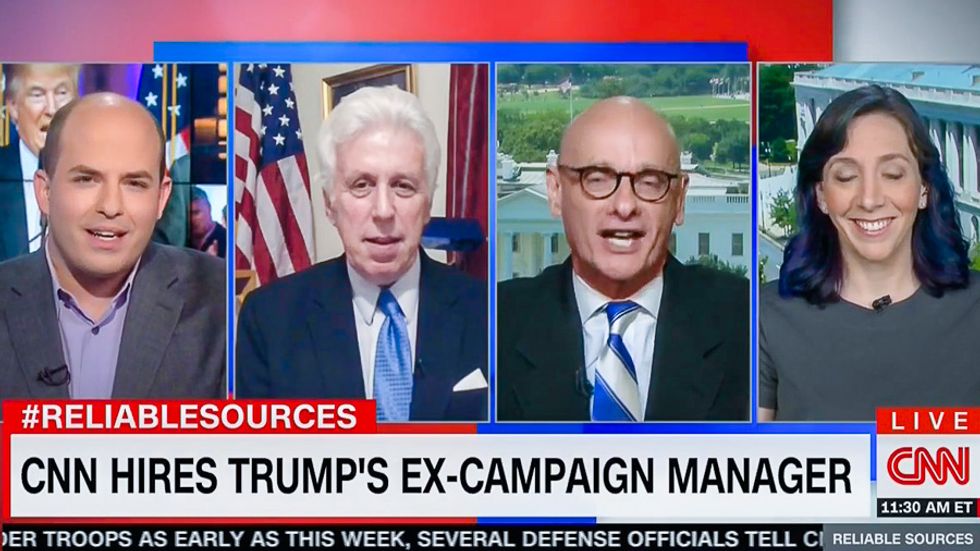 During a panel discussion on CNN's Reliable Sources, host Brian Stelter noted that CNN had faced a backlash after hiring Lewandowski because the political operative was known for manhandling reporters and had likely signed an agreement preventing him from criticizing Trump.

"I called and emailed more than a dozens sources all around CNN," Stelter reported. "And I found no signs of revolt, no organized protests about Lewandowski's hiring. But I did find some discomfort. There are some people that are uncomfortable, and there might be some awkward moments in the makeup room."

"But everyone I asked also said they understood the hiring, understood the logic of it," he continued. "The reality is that Lewandowski was not hired to be a reporter, he was hired to defend and explain and channel Trump's views."

In the end, Stelter said that he decided that "it makes sense to add another pro-Trump voice."

"I think Corey is absolutely a terrific asset," Lord insisted. "And I think CNN has made a great decision."

Lord argued that political operatives had been hired by other networks, including Karl Rove at Fox News.

"To take viewers behind the scenes, I actually booked you days ago when Lewandowski was hired," Stelter revealed. "Because it is difficult to find Trump supporters to have on the air. That's why you were brought on board almost a year ago."

Reason magazine Editor in Chief Katherine Mangu-Ward said that she also approved of the hiring because Lewandowski "might tell us something we need to know."

But Baltimore Sun Media Critic David Zurawik couldn't help but laugh at all of CNN's defenders on the panel.

"The other thing I do want to say about getting information about the process from Lewandowski," Zurawik said. "Brian, if the folks at CNN, who I think have the best political reporters on television -- if you guys need to pay him to tell you whats going on inside the Trump campaign, give your money back, you're not earning your paychecks."

"Let's find out the old fashioned way," he added. "By reporting it, not paying weasels to tell you about it."

"To me, television-wise, producer-wise this make perfect sense," Stelter insisted. "Journalistically, there are questions."

Watch the video below from CNN's Reliable Sources, broadcast June 26, 2016.

A grandmother who broke into the United States Capitol building on January 6th now says she's "horrified" by the violence that took place there as she pleads for a lenient sentence.

Via NBC 4 Washington investigative reporter Scott MacFarlane, an attorney representing 49-year-old Florida resident Anna Morgan-LLoyd says that she now regrets her decision to go into the Capitol building during the riot in a letter sent to a judge.