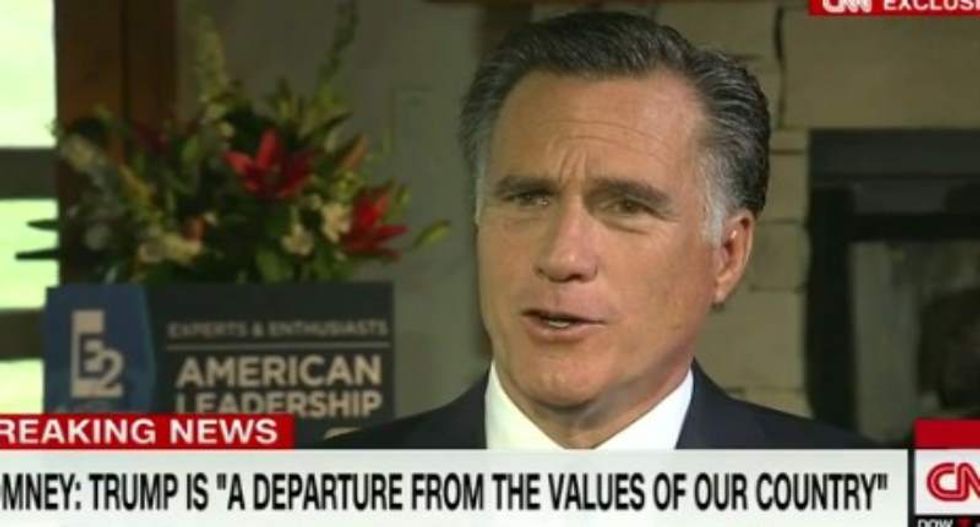 "I don't want to see a president of the United States saying things which change the character of the generations of Americans that are following," Romney told host Wolf Blitzer. "Presidents have an impact on the nature of our nation, and trickle-down racism, trickle-down bigotry, trickle-down misogyny, all these things are extraordinarily dangerous to the heart and character of America."

The former Massachusetts governor went so far as to say he would consider voting for the Libertarian candidate, Gary Johnson.

"If Bill Weld were at the top of the ticket, it would be very easy for me to vote for Bill Weld for president," Romney said. "So I'll get to know [Johnson] better and see if he's someone who I could end up voting for. That's something which I'll evaluate over the coming weeks and months."

However, Romney said that he would neither enter the race himself, or vote for Hillary Clinton, the likely Democratic Party nominee.

"Isn't that copping out of your responsibility?" Blitzer asked.

"My responsibility is to express to the American people what I believe is right about the potential nominee of the party," Romney replied. "I did so very plainly and clearly, and the people who made the choice decided to go a different direction. That's their right. But as an individual I simply can't put my name down as someone who voted for principles that suggest racism or xenophobia, misogyny, bigotry, who's been vulgar time and time again."