Morning Joe: 'What Trump is doing is electing Hillary Clinton' 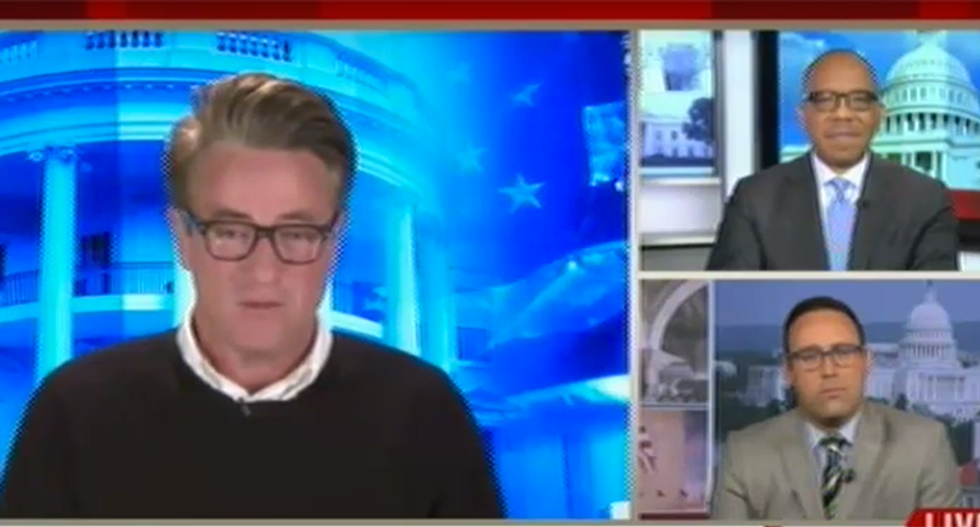 Donald Trump continued his bad news cycle Tuesday, when Federal Election Commission reports were released showing his campaign only has $1.3 million on hand for an election that is expected to cost over $1 billion.

"Donald J. Trump enters the general election campaign laboring under the worst financial and organizational disadvantage of any major party nominee in recent history, placing both his candidacy and his party in political peril," Confessore wrote.

Scarborough admitted that this is one of the many reasons that Republicans like himself have been concerned about the Trump campaign's stability. "What Donald J. Trump is doing is not only electing Hillary Clinton but wiping out Republican majorities in the Senate, in the House and in governor mansions across the country," he said.

"Morning Joe" guest Eugene Robinson acknowledged there is little chance of that message penetrating the thick skull of the GOP nominee, who sees himself as a political genius. "Yes, he needs a strategy, yes he needs an organization, yes he needs all these things, but he's Donald Trump. He is who he is... and I think we know by now that he's probably not going to change. He has one thing going for him right now, which is, he continues to dominate news cycles. Now, not in a good way, but everybody continues to talk about 'Trump, Trump, Trump, Trump.'"

Robinson continued that Trump has no message discipline and doesn't foresee a future where Trump can develop the skill. "In that sense, I'm not sure it matters who comes in eventually to nominally set the strategy because Trump is going to sit there on his Twitter feed and he's going to do whatever he does, right? I mean, that's just what he's going to do."

Scarborough attempted to backtrack, saying that Trump might change his ways, but his guests weren't having it.The Washington Post's Chris Cillizza admitted Trump has surprised him since the beginning. However, when it comes to evolving, he doesn't think it's very likely. "How many 70-year-old people do you know, I'm 40! How many 40-year-old people do you know who fundamentally alter who they are, are particularly if they've been very successful and have an opinion pretty high of themselves?"

Cillizza challenged Scarborough to name one example of how Trump is in better shape today since scoring the GOP nomination seven weeks ago.

"The fundraising numbers are, I mean, for any of us who follow this stuff at all closely, they are appallingly bad," Cillizza continued. "You could almost do nothing and raise $3 million as the presumptive nominee for a major party. I just, his poll numbers are worse. Staff wise, you could argue whether he's worse, but certainly not any better off, I don't think. The fundraising numbers are incredibly bad, there's no measure by which, in the last seven weeks he has not wasted his time here."