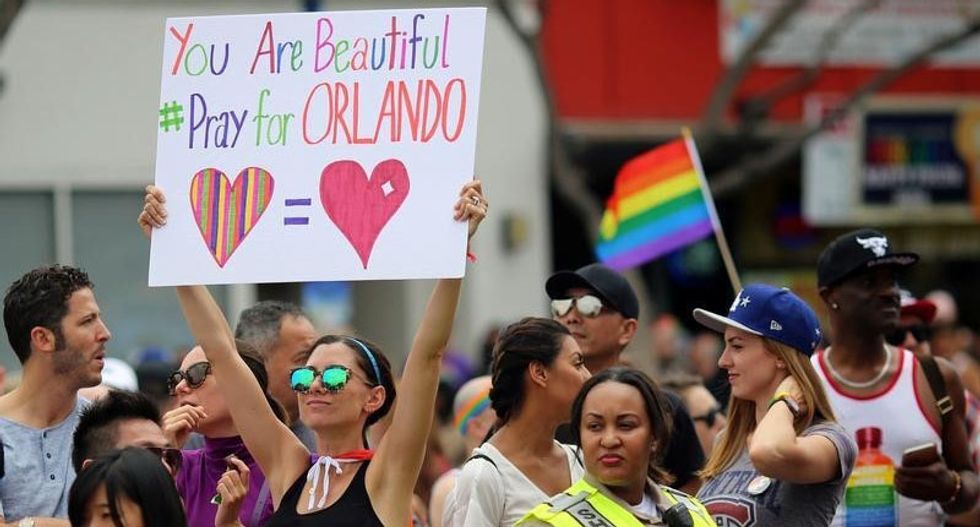 Pride parades in New York, San Francisco and other U.S. cities are expected to draw millions of revelers on Sunday, two weeks after a mass shooting at a Florida nightclub galvanized the LGBT community, and rekindled outrage over American gun violence.

An estimated 1.6 million spectators could turn out at the annual gay pride march through Lower Manhattan, according to its organizers. The world's largest celebration of pride among lesbian, gay, bisexual and transgender people was first held in 1970.

Following the June 12 shooting at Orlando's Pulse gay nightclub, police departments across the country have ramped up security for this year's parades, authorities said. A gunman pledging allegiance to the Islamic State militant group killed 49 people in the deadliest mass shooting in modern U.S. history.

In a special tribute to the massacre victims, the lead float in New York's parade will carry Pulse owner Barbara Poma and the club's entertainment manager, Neema Bahrami.

All told, the parade will feature some 2,000 marchers and 85 floats that will wind their way downtown from the Empire State Building to Greenwich Village's Stonewall Inn, the birthplace of the gay rights movement.

President Barack Obama on Friday designated the bar a national monument, the first to specifically honor the contributions of lesbian, gay, bisexual and transgender Americans.

The bar was the scene of a 1969 police raid that triggered riots and an impromptu rally that ignited a long struggle to bring LGBT people into the American mainstream and guarantee their rights.

Gun control and the prevention of gun violence have emerged as prominent themes in pride events this year, with the Orlando slayings putting them near the top of the national political agenda.

Representatives of two gun control advocacy groups, Moms Demand Action for Gun Sense in America and Everytown for Gun Safety, plan to speak at more than 20 pride events around the country this weekend, according to a statement from the groups.

Orange, the unofficial color of the city of Orlando, has been ubiquitous at this year's events, too.

In New York, the weekend's festivities began on Friday with a PrideFest street fair at which orange bandannas were handed out to the thousands of participants. On Sunday, many parade marchers planned to hold orange flags bearing the rainbow stripes that symbolize LGBT pride.

New York Police Commissioner Bill Bratton said last week that the city had known of no specific threats against the weekend's events.

Even so, the New York Police Department was beefing up security. It was assigning additional police officers, some of them equipped with radiation-detection devices and explosive-detecting dogs.

The area is being monitored by cameras, helicopters and officers posted on rooftops, stationed in the subway system and on vessels patrolling the Hudson River.

In San Francisco, people attending events will have to go through security checks and metal detectors, and organizers were discouraging them from bringing bags.