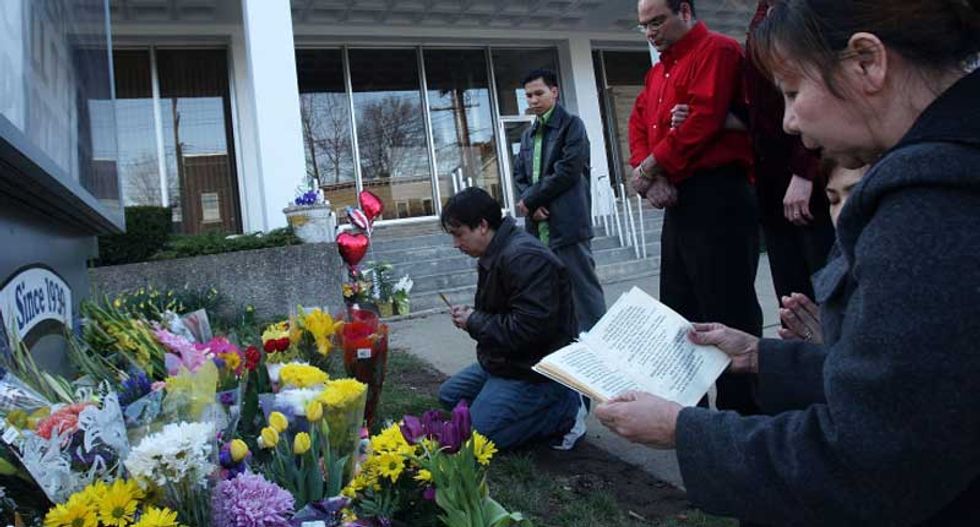 The terrorist attack on a gay nightclub in Orlando has, at last report, resulted in 50 dead. The sheer number, which makes it the largest mass shooting in American history, will keep it front and center for days.

But, another mass shooting took place in 2009. At the time, it was one of the worst mass shootings in American history--13 dead, 4 wounded on March 3, 2009. Despite the number of dead, and the horrific details that emerged about the shooting, the press quickly moved onto other stories.

Why would a shooting that claimed 13 lives--one of the worst--not be listed? It's difficult not to  reach the same conclusion as former Binghamton mayor Matt Ryan, who argued that it was sad to think that it might be "because the victims were not Americans."

Substitute the idea that the victims were members of the LGBTQ community, and my concern about the way that this event will be "not remembered" is already playing out. Under the #pulseshooting hashtag, the appropriate comments are cries of sorrow for the victims, and there are other offers to help those in Orlando. But, not surprisingly, a toxic soup of triumphant rage of rightwing zealots and homophobes has already produced hate tweets that proclaim, "50 less f$#s" (and he misspelled the epithet), while others claimed that the president would be "giggling," or that once again, gun rights were in jeopardy. Concern trolls urged liberals to "wake up" and join the right in its Islamaphobia. Mostly, however, there has been the rewriting of the horror at the Pulse nightclub as being "another" attack by a terrorist. Despite the evidence that the gunman was confronted by an armed police officer who shot back at the gunman, already, the tweets insist that the reason so many died in Orlando was that "liberals" had made sure no one had access to guns. And the biggest sin of liberals, according to the rightwing, which is busy re-writing the narrative of June 12, is that of "tolerance."

It will be forgotten that the gunman targeted the bodies in a gay nightclub. It will be forgotten that the first names of the dead that were released reflected the fact that it was "Latin" night at the club, and it was Latin and Queer heritage that was being celebrated. What they will remember is not that this was a hate crime carried out with a legal firearm that allowed him to kill 50 people. This shooting will be remembered as an attack by a "Muslim terrorist."

It is only because of the number of dead, and America loves to report on anything that breaks some kind of record--as if it's a competition--that the events in Orlando will be remembered. But watch how quickly the identity of those killed becomes subsumed under the headlines that will scream about Muslim terrorism.

The families of the Binghamton victims can't even claim a place in America's roll call of shame.

On a morning when language and citizenship classes were being conducted at the American Civic Association in downtown Binghamton, Jiverly Wong walked into the center with a 9 mm and a .45 caliber Beretta handguns. Before he was done shooting, he had fired over 100 rounds. He killed himself at the end of the rampage.

But perhaps it fell off the radar because the victims' names were not worth printing? In the Wall Street Journal ran a headline that the dead had been identified, it mentioned the two white women who had died, one a teacher in the classroom where Wong shot everyone in the room, and one the receptionist who was the first to die. But the victims--who were largely immigrants--were largely ignored by all the newspapers. It took a long search to find the  New York Times article that did list all of the victims.

Here are their names:

Most of the news reports were about the two American victims. Jiverly Wong posted a two-page letter explaining why he was going to go shoot up the center. In the letter,  he talked about paranoid fantasies about being pursued, but he also mentioned that people made fun of him for his attempts to speak English. He had been taking classes at the center, but quit them shortly before the shooting. It is awful to think that the one place in Binghamton that provided refuge to immigrants was where he chose to carry out his hateful, murderous rampage.

My husband worked just a few blocks from the center. He sent me e-mails and texts throughout the day, and when he came home that night, he was shattered. As he said, "I guess it's our turn." A town of 50,000, a center for immigrants. Not any different than most small cities in America. And yet, it's as if it never happened.  While we know why Wong killed those who were being helped by the center, we do not know why this story fell out of American news feeds and consciousness so quickly.

The numbers of dead in the Pulse nightclub shootings will keep the shootings in the headline for as long as it takes for people to get tired of seeing articles about it in their newsfeeds. And, if the narrative going forward is that this was a hate crime against the LGBTQ community, rather than the work of a Muslim terrorist, I think we may see it fade more quickly than we might hope.

In a nation where people are obsessed with who is using the bathroom, the fact that hatred of gay people led to a mass shooting will be conveniently forgotten. The bathroom wars will continue. After all, it's not like racism went away after nine people were slain in a church in Charlotte. No doubt there will be some lovely symbolic gestures over the next week or two. Vigils. Perhaps even people standing in solidarity with the victims and the gay community.

But, it's only a matter of time before the hate merchants will start posting photos or reports about what was happening in the club at the time of the shooting. Already, a tweets have appeared that address liberals asking them to choose between refugees and the LGBTQ community. For small minds, there can only be an either/or situation. Once the right wing has been informed that this was inspired by their activism against gay folks, they'll stop remembering Pulse, and, if they do mention it, as they are doing now on Twitter, it will be about how Muslims hate gays.

As we think about what transpired in Orlando on June 12, may we also remember the nameless, forgotten victims of April 3, 2009. May we always remember that acts of terror against groups who do not conform to right wing definitions of "true Americans" are still terrorist acts.