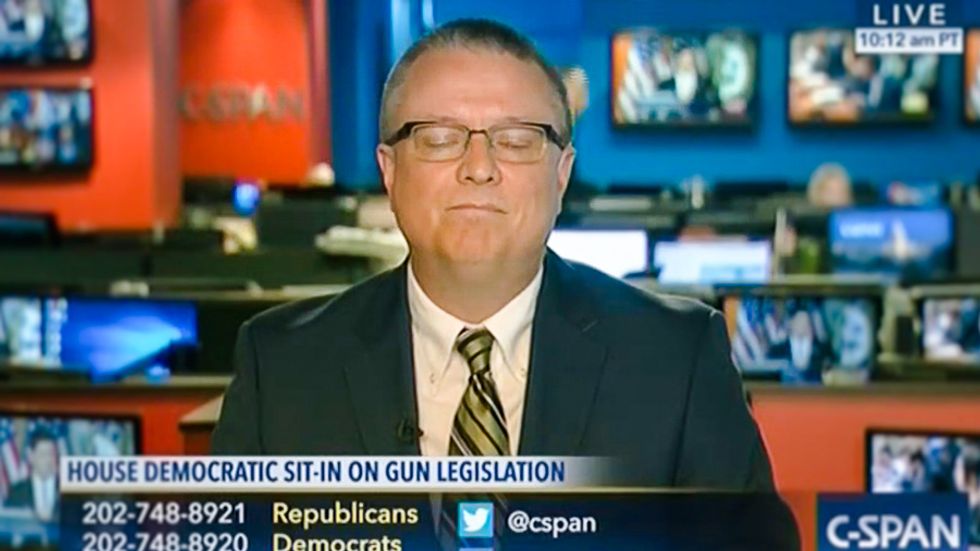 After lawmakers ended their gun violence sit-in in the U.S. House of Representatives on Thursday, callers on C-SPAN's Republican line lashed out at Democrats by comparing the effort to abortion and Nazi Germany.

One caller named Keith from North Carolina accused Democrats of putting on a "big political show."

"The thing that's really bothering me is how hypocritical it is, all these people talking about saving children and all that," Keith complained. "The doctors which perform the abortions have killed more people than anybody else because those are American citizens that those doctors killed."

"When a baby is conceived, it is an American citizen and has the same rights as me and you," he argued. "But it's okay for that mother to choose to kill that. But yet, this gun that can do nothing by itself is so evil."

Wayne from Utah said that Democrats "wanted to do away with the due process."

"If it's not according to the Constitution, we don't need it to be legislated into being," Wayne opined. "If we give up our guns, we'll be just like Germany was before Hitler took over control. That's the first thing he did was disarm the population."

"That's the real issue here that the federal government is trying to do is to disarm the general public so that they can control us," he added. "In those last four major shootings of people, if there had been people who were armed with concealed carry weapons and knew how to use them, the people either wouldn't have went there to attack a gun-free zone where they knew that nobody would resist them or they would have been stopped with minimal loss of life."

Lisa in Oklahoma, calling in on the independent line, asserted that "the Democrats are just out of their minds," and that she had served in Navy to protect Second Amendment rights.

"It looked like the 1960s," she declared. "In 9/11, they said they had bombs on the airplanes that went into the towers and the Pentagon. And they threw the jets into the buildings. And I will never forget that, that morning. I thought it was some sort of movie."

"All right, thanks for calling, Lisa," the C-SPAN host said politely, moving to the next caller.

Watch a sampling of the C-SPAN callers in the video below.