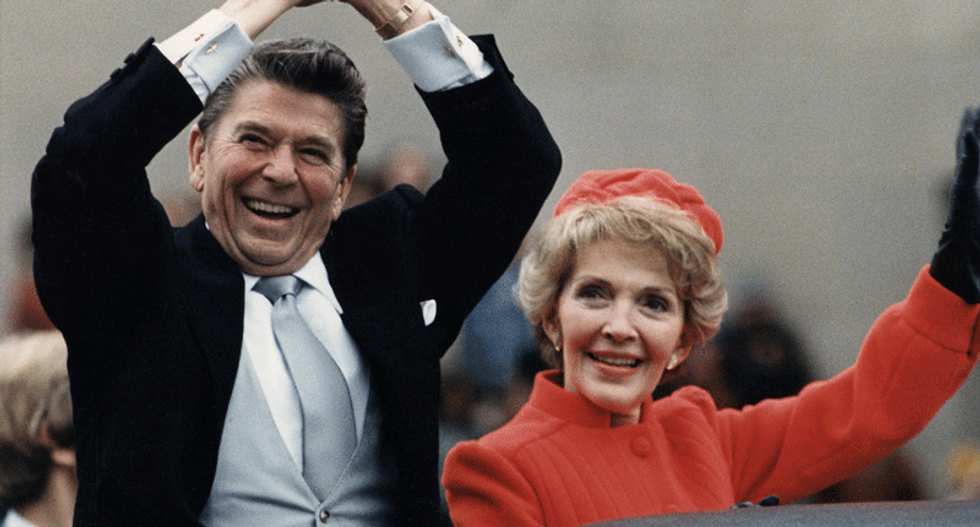 Donald Trump tried on several occasions to court influence with Ronald Reagan during his presidency, only to be rebuffed, the Washington Post reported.

According to records in the Reagan presidential library, the current presumptive GOP presidential nominee invited Reagan and First Lady Nancy Reagan to both his Atlantic City casino for a Latoya Jackson concert and his Florida property, Mar-a-Lago -- which he said was designed as a "southern White House." The First Lady reportedly crossed out the line, "I am familiar with Mar-a-Lago" in her response declining the latter invitation.

Trump also contacted the then-president in 1987 encouraging him to name Paula Hawkins, a former GOP senator from Florida, as Secretary of Transportation. Instead, Reagan picked Jim Burnley, who would go on to serve until 1989.

But according to the library's archives, the real estate magnate and reality TV star was also exploring a presidential run as early as that same year, when he flew to New Hampshire and spent around $100,000 on full-page newspaper advertisements criticizing Reagan's foreign policy by saying, "There's nothing wrong with America’s Foreign Defense Policy that a little backbone can't cure."

"The world is laughing at America's politicians as we protect ships we don't own, carrying oil we don't need, destined for allies who won’t help," they stated. "Let's not let our great country be laughed at anymore."

At another point that year, Trump was close enough to headlining a major Democratic fundraiser in New York City that the administration's political director, Frank J. Donatelli, contacted Chief of Staff Howard Baker.

"It would be most helpful if you would place a phone call to Don Trump today," Donatelli wrote in a memo to Baker. "He has a large ego and would be responsive to your call."

The word "large" was reportedly underlined for emphasis on the memo. According to the archives, Trump did not join the event.

Donatelli, the current chair of the Reagan Ranch Board of Governors, told the Post this week that despite Republican insistences to the contrary, Trump and Reagan "couldn't be more different."

Reagan was a small government conservative with definite and long-held public policy views," said Donatelli, a former Republican National Committee deputy chair. Mr. Trump's views seem far more impressionistic. Most important, Reagan's good humor and optimism gave the public reassurance that he could and would effectively manage the vast powers of the presidency. That's a test that every presidential candidate has to pass."

Failed Arizona gubernatorial candidate Kari Lake believes that former President Donald Trump was right to call for the "termination" of the sections of the Constitution that prevent him from being reinstated as president.

In an appearance on the right-wing Salem News flagged by the Republican Accountability Project, Lake argued that Trump's desire to shred America's founding document was justified given the fraud that supposedly deprived him of a second term in the White House.