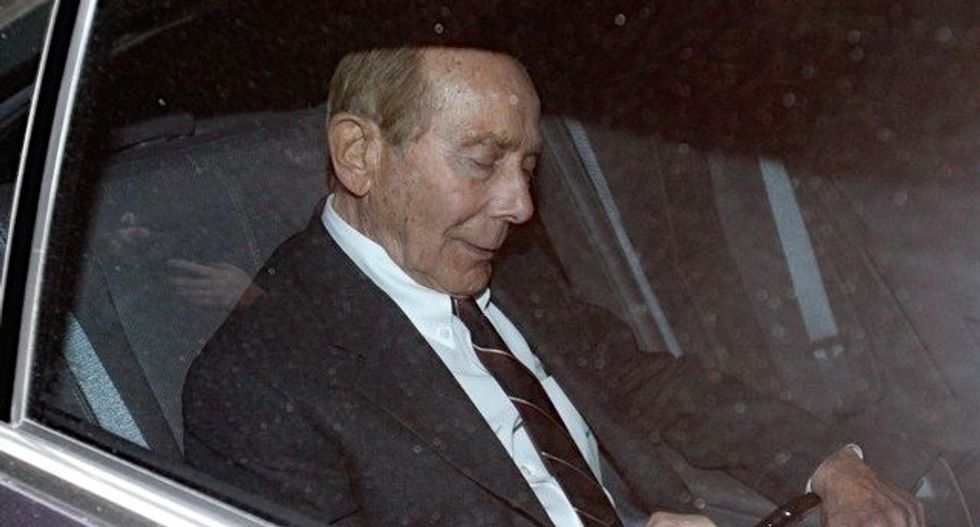 Former CEO of American International Group Inc, Maurice "Hank" Greenberg, checks his phone inside a car after leaving a building in downtown New York where he was deposed by the Attorney General's office March 10, 2010. REUTERS/Jessica Rinaldi

The New York Court of Appeals ruled on Thursday that state Attorney General Eric Schneiderman could seek to recoup millions of dollars in bonus payments to Greenberg using the legal remedy called disgorgement.

Unlike damages, which are used to compensate victims' losses, disgorgement requires a defendant to give back gains obtained from unlawful means. The ruling means that Schneiderman can go after $5 million he says Trump personally pocketed from the Trump University real-estate seminar venture.

"It doesn't help him," Jeffrey Goldman, Trump's lawyer in the New York case, said on Monday of the Greenberg ruling. But Goldman said Trump expected to win the case and could also try to limit the amount subject to disgorgement, such as by arguing that most of it was earned outside of New York.

According to the state's 2013 lawsuit against Trump, filed in state court in Manhattan, Trump University was an unlicensed, illegal operation that bilked students of up to $35,000 each between 2005 and 2011. Two proposed class actions in California make similar allegations.

Trump, the presumptive Republican presidential nominee, has repeatedly raised the Trump University litigation on the campaign trail, calling the lawsuits baseless and politically motivated. He has also accused the federal judge overseeing the California lawsuits of being biased against him because of his ethnicity. The judge was born in Indiana to Mexican parents.

In the Greenberg case, the state accused the former CEO of orchestrating sham transactions at AIG and misleading shareholders about the company's financial health between 2000 and 2005. Schneiderman is asking that Greenberg disgorge some $25 million in bonuses during that period, plus interest.

Greenberg has denied any wrongdoing. His lawyer, David Boies, who represented Democratic presidential candidate Al Gore in the dispute over the 2000 election recount, had argued that disgorgement was not a remedy available to the New York attorney general under either the state's securities fraud law or another fraud statute. The Court of Appeals rejected Boies' arguments.

The ability to seek disgorgement may be useful to Schneiderman because the California cases involving Trump University may be resolved before the New York case. One is scheduled for trial on Nov. 28, just a few weeks after the Nov. 8 election.

A settlement or judgment in those cases could undermine Schneiderman's claim for $40 million in damages because he is suing on behalf of many of the same former Trump University students. But disgorgement claims would not be affected.

A deputy with the Bradford County Sheriff’s Office has resigned after body camera footage showed him pointing a gun at a pregnant Black woman and then threatening to shoot her if she moved.

Local news station WOKV reports that Bradford County Deputy Jacob Desue originally pulled over Ebony Washington for a speeding violation after he found her driving 75 miles per hour in a 55-mile-per-hour zone.

Nicaraguan police on Friday forcefully removed Catholic bishop and government critic Rolando Alvarez from his official residence after two weeks under siege, said Church and rights groups who had no news on his whereabouts.

Alvarez, along with several priests and lay people, had been holed up at his residence in Matagalpa in central Nicaragua since August 4, alleged by authorities of inciting violence to destabilize the Central American country.

The January 6 committee and the paranoid style

Joe Biden won the 2020 presidential election. But the dramatic testimony and video footage at the January 6 hearings documented the obsessive campaign by Donald Trump and some of his followers to convince people that Trump had, in fact, won.

They were (and some still are, or say they are) convinced Trump won in the face of overwhelming evidence of Biden’s victory – from state boards of elections, state recounts, the actions of the electoral college, rulings in dozens of appeals and court challenges, the Attorney General, Congressional certification of the election results, the inauguration of President Biden, media reports and, now, finally, the House hearings.