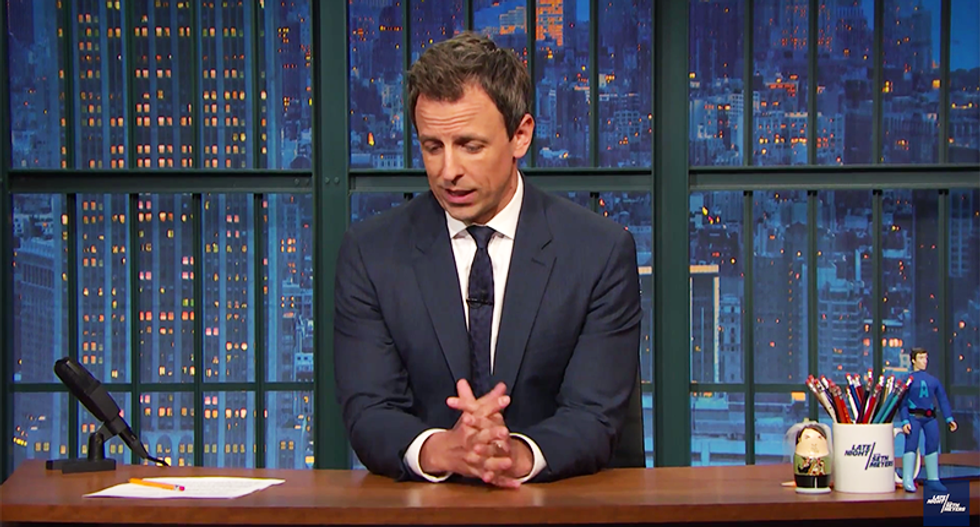 When tragedy strikes like what happened Sunday in Orlando, our late-night comedians suddenly become the nation's bartenders who help us talk through what's going on and give us advice and a few laughs before sending us off to fight another day. Monday evening, Seth Meyers used his "Closer Look" segment not merely to walk through the events over the last two days, but to look at how we got here and how we keep coming back here.

"Sadly, some of the details sounded all too familiar," Meyers said after citing the outpouring the city has received.

Meyers noted that the shooter used the same weapon that has been used in other mass shootings like the San Bernardino and Aurora shootings. "Now, there's been a lot of talk about motive," Meyers acknowledged. "This was an attack on LGBT people fueled by bigotry and hatred and the shooter was apparently inspired by ISIS, but we're going to talk about guns because, whether the shooter was a homophobe, mentally ill, a terrorist inspired by ISIS or all three, what allowed him to kill so many people Sunday was his gun."

This will spark another conversation in the country about guns, that will likely go nowhere as the NRA tightens its grip around the throats of Congress. Meyers said that it might be worth considering a few facts before that conversation begins, however.

"First, when he spoke to the nation on Sunday, President Obama made note of our continued insistence of doing nothing in the face of senseless acts of gun violence like this one," Meyers began before playing the clip of Obama's speech. "And when consistently given a chance, Congress continues to do nothing as a course of action."

For example, following the San Bernardino shooting, Senate Republicans rejected a bill that would have prevented people on the terrorist watch list from being able to obtain guns like the AR-15 used on Sunday. President Obama referenced the bill just two weeks ago at a town hall when a gun shop owner asked why he was trying to take their guns away.

"I just came from a meeting today, in the situation room, in which, I've got people who we know have been on ISIL websites, living here in the United States, U.S. citizens, and we're allowed to put them on the no-fly list when it comes to airlines, but because of the National Rifle Association, I cannot prohibit those people from buying a gun," Obama told the crowd.

So, when discussing gun control, Meyers urged the audience to keep a few things in mind. "For example, it might be worth considering, America has just '4.4 percent of the world's population, but almost half of the world's guns around the world.'" Meyers cited. "Which is important, because a Harvard review of the academic literature has found considerable evidence that there is a relationship between gun availability and gun deaths."

When it comes to the weapon, Meyers cites the NRA, who claims that the AR-15 is useful for hunting or home defense, "but that's not exactly true." Meyers cited Slate, which quoted one hunter, who admitted the gun was first and foremost designed to be an assault weapon, and that no hunter who is any good at hunting, needs an assault weapon to hunt.

"We have to decide what kind of country we want to be," Meyers said echoing Obama's words. "Unfortunately, based on Donald Trump's tweets it seems he's already decided." Meyers then showed a clip of news coverage showing Trump taking a victory lap for his previous comments about "radical Islamic terrorism."

"I don't know who's been congratulating Donald Trump, but you may want to redirect your congratulations to the first responders or those waiting in line to give blood," Meyers said. "They're the ones who deserve congrats and they're not asking for it. I have a feeling Donald Trump is not giving blood, and if he did, no one would want it because it probably looks like ectoplasm. So, while there were some callously exploiting the tragedy to spread bigotry and misinformation, let's keep in our hearts the victims and applaud those who's acts of love and humanity that poured forth in Orlando and across the country. Because, at the end of the day, that's what will endure."