Sorry, but I have no sympathy for old England-First cranks and soccer hooligans 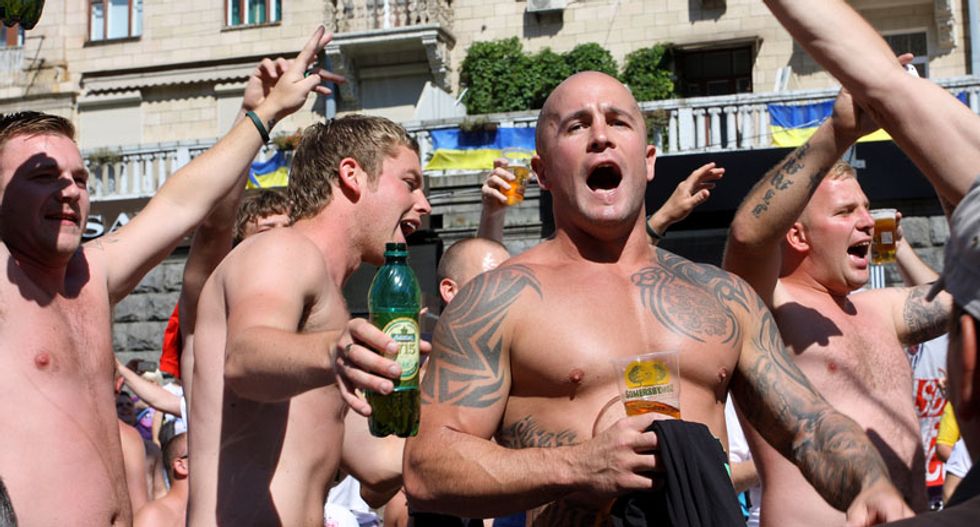 We tend to bend over backwards to understand what motivates awful white people to be awful. If they’re lashing out against immigrants or people of color, it can’t be because they’re bigots – it’s because they’ve been savaged by globalization. We tut-tut about their sense that their culture is slipping away, even if that culture embraces Confederate romanticism or football hooliganism. Oh, yes, we tell ourselves, the elites clearly have driven a massive increase in economic insecurity, so it’s perfectly understandable that they’d be drawn to Donald Trump or UKIP. Or vote leave.

But make no mistake: while Brexit was no doubt supported by some decent, well-informed people with the best of motives, it was put over the top by cranky old England-Firsters and the kind of louts who throw bananas at black soccer players. Leave clearly won the stupid vote.

I won’t pretend to be an expert on Europe’s common agricultural policy, but I can read a poll, and there was a doozy of an exit survey conducted by the oh-so-British-sounding Lord Ashcroft Polls. It found that those who think that capitalism is a “force for ill” were about evenly split, voting to leave the EU by a 51-49 margin. That narrow divide was dwarfed by what we might call the “asshole gap” – conservative assholes were overwhelmingly in favor of Brexiting the EU.

People who think multiculturalism "is a force for ill" voted to leave by an 81-19 margin.

People who think social liberalism "is a force for ill" voted to leave by an 80-20 margin.

People who think feminism "is a force for ill" voted to leave by a 74-26 margin.

People who think the green movement – environmentalism -- "is a force for ill" voted to leave by a 78-22 margin. No word on climate change deniers specifically, but one can certainly speculate.

In other words, leave was given a big boost by the British equivalent of Breitbart readers.

The older you are, the more likely you were to vote leave. White voters supported Brexiting by a 53-47 margin, while two-thirds of Asians and three-quarters of blacks voted to Bremain. One would think that the latter have been subjected to the same economic forces as the former, but they don’t wax nostalgic for their dead empire or blame their troubles on those bloody wogs.

Yes, many of the people who wanted out of the EU have been battered by trade liberalization and deindustrialization and austerity politics, but if you blame those problems on Muslim shopkeepers and Polish maids, you won’t get my sympathy.

It’s also true that there are deep, structural flaws in the EU. But the Brexiters didn’t call to reform its institutions, they opted to blow it up in the name of England. And the irony is that the British have less to bitch about in terms of their lost sovereignty than most EU members. Countries like Greece and Spain have suffered immensely from the fact that they don’t control their own currency -- they can’t respond to economic shocks with monetary policy. The UK never joined the Eurozone and doesn’t have that problem.

Austerity imposed by Brussels (or Berlin, if you prefer) has certainly wreaked havoc on many European countries, but blaming the EU for British austerity is like crediting FedEx’s speed to the postal service. Austerity is clearly responsible for widespread disenchantment with the “elites,” but look no further than David Cameron’s Tory government to find the perpetrator. Hell, Cameron coined the phrase “the age of austerity” in 2009, when he ushered in a crushing round of spending cuts instead of spending money to stimulate the economy. In 2013, he said that austerity was here to stay, and urged Britons to get used to “a leaner, more efficient” state. “We need to do more with less. Not just now, but permanently,” he said. On the eve of last year’s elections, he promised yet another dose of austerity – and won the support of many of the same people who voted to leave last week (Tories made up the largest bloc of leave voters, followed by the far-right UKIP).

That brings us to another consistent theme: Leavers don’t seem to have had any clue what they were doing. Oxford economist Simon Wren-Lewis says they were sold a pack of lies by right-wing politicians working with the infamous British tabloid press. And it wasn’t just the tabs’ never-ending stream of slanted stories about the UK suffering under the weight of an “immigrant invasion.” The Brexiters bought the leave campaign’s oft-repeated lie that the UK sends £350m per week to the EU, and that its (much smaller) membership fees would otherwise be spent on the National Health Service. They bought claims that leaving could bring about a better deal with the EU – a deal without open borders -- and that reducing the immigrant population to 100,000 would have no impact on the economy. They read it in The Daily Mail, and they believed it. That’s on them.

Those who said they pay “little or no attention to politics” voted to leave by a 58- 42 margin, and 54 percent of Brexit supporters didn’t think the leave campaign could win – many were just registering a cranky protest vote against London’s cosmopolitanism. According to Google trends, these were the UK’s four most popular searches in the hours after the polls closed…

It was only after the poor rural county of Cornwall voted 57-43 to leave the EU that its leaders realized that they’d lose £60 million per year in EU development funds in the deal. According to The Independent, the leave campaign “promised the county would not be worse off in terms of the investment it receives.” A flummoxed Cornwall council released a statement assuring its constituents after the vote. It read, “We are seeking urgent confirmation from Ministers that this is the case.” It’s like Mississippi leaving the United States only to discover that it gets $3 in federal spending for every dollar in taxes it sends to Washington.

Most Brexiters believed that leaving the EU was no biggie – almost 70 percent said that it “might make us a bit better or worse off as a country, but there probably isn’t much in it either way.” That’s unlikely to be the case, and there’s going to be a lot of buyer’s remorse as the reality sets in. It’s already started -- one woman told ITV News, "Even though I voted to leave, this morning I woke up and I just — the reality did actually hit me. If I'd had the opportunity to vote again, it would be to stay."

Sorry, Mum, but maybe you should have Googled it before voting to blow up the EU. My sympathy goes out to those who wanted to remain, and are now being stripped of their citizenship in a flawed, but nevertheless historic transnational project. I can even muster some pity for those who just wanted to register a protest vote and were then surprised by the results. But I’m not going to feel the pain of the knuckleheads whose xenophobia left them open to the leave campaign’s bullshit. They’re just a bunch of wankers.