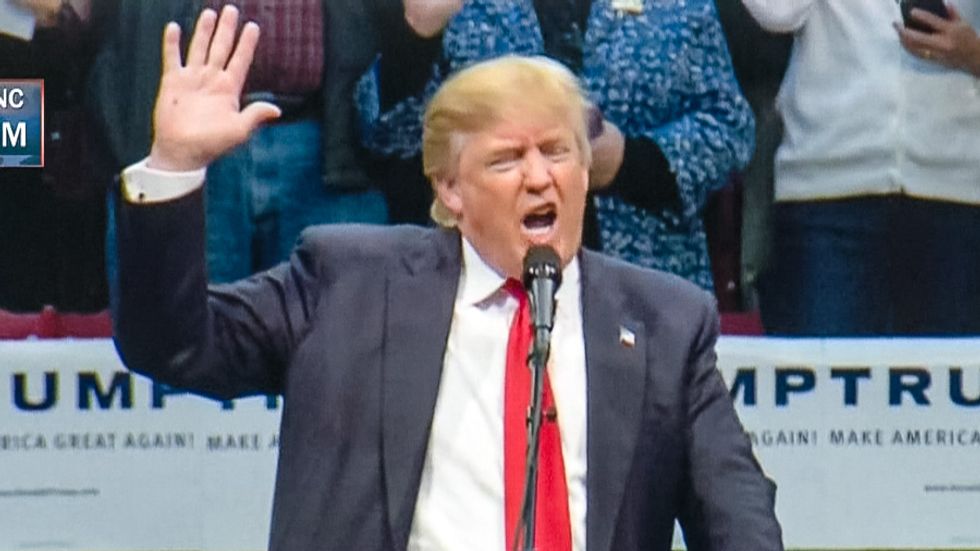 Today's bizarre moment in Donald Trump's history from Mother Jones is a short story from Trump's 1997 book The Art of the Comeback in which The Donald got outsmarted by a fifth grader.

In a chapter about his scheduling secrets, Trump talks about an award as "Principal for a Day" at an elementary school in the Bronx, New York's P.S. 70. Trump offered the students a drawing to see how many would win coupons for a free pair of Nike shoes from the store in Trump Tower.

While many students were excited about it, others had problems. The school's chess team was desperate to reach fundraising goals so they could go to a national tournament. Another student pointed out that picking up the sneakers meant taking a bus all the way across town to get to Trump Tower. But the best came from a student who thought the whole idea was dumb.

"Why did you offer us sneakers if you could give us scholarships?" asked Andres Rodriguez, a fifth-grader whose father had died and whose mother couldn't work because she had a bad leg, MoJo cites New York Times.

"I asked because school is more important than sneakers, but he didn't really answer," he told the New York Daily News.

Trump must have felt guilty, because he ultimately ended up handing out free sneaker coupons to disappointed kids and gave all of them their own Trump hats. But the worst was that he put a fake $1 million dollar bill, like Monopoly money, in the donation box at the bake sale for the chess team. Some assumed that was Trump's pledge to actually give $1 million. Except, Trump only gave $200, an unfortunate exchange rate from Trump money to actual money.

Trump got so much backlash for Trump's stingy Scrooge-like ways that money poured in from other people who felt sorry for the children that they got duped by a self-proclaimed billionaire.

"One woman called and offered $2,000," said David MacEnulty, the chess teacher at P.S. 70. "Another person pledged $5,000. Another just gave $500, and someone else, $125. I just got off the phone with a woman who is getting a group of her friends together to help us. When people know their money is going to do some good, they are very eager to give."

Trump referred to the event as a success because he had "a wonderful time" and "talked strongly about working hard and incentives" with the students. "The honorary position should really be called 'principal for a half day,' because I was finished by about 12:30," he wrote.