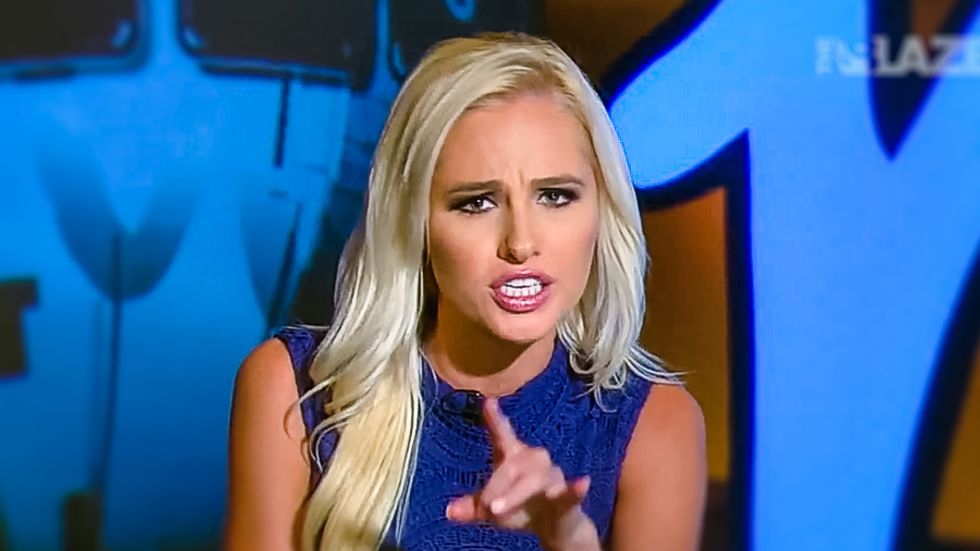 Tomi Lahren, who is a conservative host at Glenn Beck's The Blaze TV, expressed anger this week after actor Jesse Williams spoke at the BET Awards about ending racism.

On Sunday night, Williams delivered a passionate speech while accepting this year's humanitarian award from BET.

"This is for the real organizers all over the country. The activists, the civil rights attorneys, the struggling parents, the families, the teachers, the students, that are realizing that a system built to divide and impoverish and destroy us cannot stand if we do," Williams said. "There has been no war that we have not fought and died on the front lines of. There has been no job we haven’t done, there’s been no tax they haven’t levied against us, and we’ve paid all of them. But freedom is somehow always conditional here."

We’ve been floating this country on credit for centuries, yo, and we’re done watching and waiting while this invention called whiteness uses and abuses us, burying black people out of sight and out of mind, while extracting our culture, our dollars, our entertainment like oil, black gold. Ghettoizing and demeaning our creations then stealing them, gentrifying our genius and then trying us on like costumes before discarding our bodies like rinds of strange fruit. The thing is, though, the thing is that just because we’re magic, doesn’t mean we’re not real.

During the "Final Thoughts" segment of Lahren's The Blaze program on Monday, she lashed out at Williams.

"The BET Awards were last night, notably they were very black," she opined. "Oh, but can I say that? What with my whiteness and all? Well, too damn bad."

"Are you kidding me, Jesse?" she asked, accusing the actor of being anti-police because he spoke out about the killing of 12-year-old Tamir Rice.

"The term unarmed black man may be literally accurate, but it doesn't tell the whole story in most cases," she insisted. "In a number of cases, if the victim ended up being unarmed, it was certainly not for a lack of trying."

As for equal rights, Lahren demanded to know "what rights black people don't have."

"Also, white people, yeah, we do have a record of critique of your oppression," she ranted. "You know how many of our ancestors fought in the Civil War to free your ancestors? Bloodiest war in the United States history was over what was right and it was largely white people fighting it."

"It's not white people working to divide America, it's you!" she exclaimed as if Williams could hear her. "You and Beyonce and Jada Pinkett Smith and Al Sharpton. Do you see yourself as a victim?"

"It sure seems like you want special treatment, it sure sounds like you would like a gold star at the end of the day just for being born. Get over yourself."

Lahren concluded: "Nice work and how about you sit down?"

Watch the video below from The Blaze.