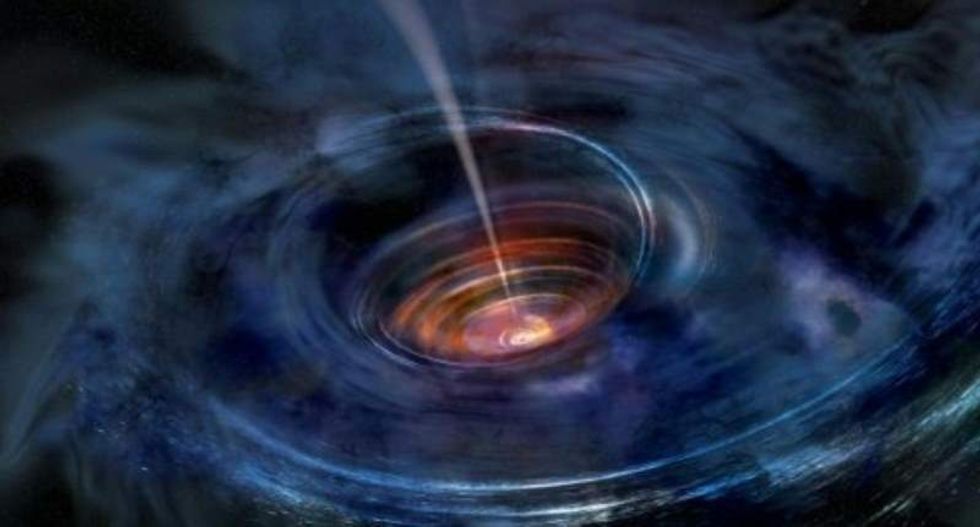 In this artist's rendering, a thick accretion disk has formed around a supermassive black hole following the tidal disruption of a star that wandered too close on June 23, 2016. (AFP)

Scientists reported Wednesday that they witnessed in unprecedented detail a star being ripped to shreds and devoured by a dormant supermassive black hole.

The celestial feeding frenzy -- known as a tidal disruption event -- was detected from the high-energy, X-ray echoes emitted as debris from the hapless star swirled in a vortex near the black hole's centre.

The findings were published in the prestigious science journal Nature.

"Never before have we been able to see strong gravity effects from a dormant black hole," Erin Kara, a Hubble postdoctoral fellow at the University of Maryland, and lead author of the study, told AFP.

Black holes are regions in space-time where mass is collapsed into such a small area that gravity takes over completely, and nothing -- not even light -- can escape.

They cannot be seen, and are inferred from their influence on nearby objects.

Most of what astronomers know about so-called supermassive black holes -- found at the centre of galaxies -- comes from a relative handful that actively gather and consume matter.

Roughly 90 percent are dormant, only awakening from time to time to gulp down anything that passes too close.

When that happens to a star, it disappears in a swirling flash of energy and light.

"Most tidal disruptions don't emit much in the high-energy X-ray band," Kara explained.

Only three such episodes have ever been recorded, "and this is the first such event that has been caught at its peak".

The tell-tale signs from this particular slumbering giant, dubbed Swift J1644+57, were picked up by NASA's Swift satellite, the researchers reported.

Three more satellites -- one from the European Space Agency, another from Japan, and a third from NASA -- tuned in to the event, yielding a treasure-trove of "excellent data".

The fact that X-rays could be detected at all stems from the amplifying effect of the so-called accretion disk -- the doughnut-like swirl of matter falling into the black hole.

Scientists had previously thought X-rays generated in the death throes of a disintegrating star came from huge beams of particles already ejected by the black hole.

The new observations tell another story: "Actually, we can see this reverberation at work very close to the central black hole," Kara said.

Black holes that are dormant today played a key role in the evolution of galaxies, so seeing one in action may provide clues about the formation of the Universe, said co-author Chris Reynolds, a professor at the University of Maryland.

"If we only look at active black holes, we might be getting a strongly biased sample," he said in a statement.

One of the crucial unanswered questions about black holes, for example, is how fast they rotate, or spin. Knowing this would yield valuable clues on how they form and mature.

One theory suggests that black holes become dormant after they reach "maximal spin", in which case they should all be spinning at the same rate.

Another says black holes only grow by merging with each other, in which case spin rates would be more variable.