A city on the rebound: Cleveland shines as Republicans meet 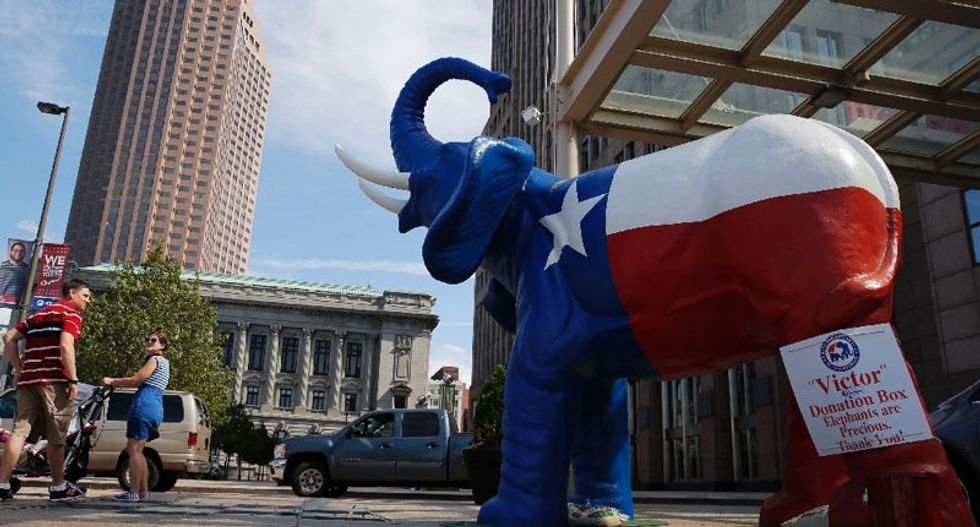 An elephant statue decorated with the state flag of Texas is seen amid preparations for the arrival of visitors and delegates for the Republican National Convention in Cleveland, Ohio, on July 17, 2016 (AFP Photo/Dominick Reuter)

As an American city, Cleveland has suffered its share of distressing jokes -- the river famously caught fire, after all.

But the urban center is undergoing unprecedented revival that is transforming downtown, and this week's Republican National Convention is the feather in this Ohio city's cap.

The community of nearly 400,000 was known for its steady population decline, as manufacturing jobs fled in the 1980s and 1990s with industrial automation forcing thousands out of work, including longshoremen who ruled the docks on the Cuyahoga River.

As successful city dwellers left for the suburbs, the core hollowed out. Race relations soured. Civil services withered in the urban community that Moses Cleaveland laid out in 1796.

The hapless American football team, the Cleveland Browns, has never reached the Super Bowl, a point of shame for many Clevelanders. Other sports teams hardly fared better.

But today the city is on the upswing, with young, high-skilled professionals flocking to Cleveland's flourishing manufacturing and engineering firms particularly in fields like bio-engineering.

Cleveland is enjoying a "brain gain" of young, college-educated adults, according to a 2015 study by the Center for Population Dynamics at Cleveland State University.

Two major universities act as research hubs. Authorities have dramatically improved civic space, and the city has taken extraordinary environmental strides since an oil slick on the Cuyahoga River caught fire in 1969.

The Rock and Roll Hall of Fame recently celebrated its 20th anniversary downtown.

The city itself -- a mixture of rich traditional architecture that include art deco bridges and drab mid-century buildings -- is gleaming with the clean-up effort ahead of the GOP confab.

"It's the polishing off of an old apple," Ryan Minnich, a high school English teacher from Cleveland told AFP of the resurrection.

"It's showing folks the better side of a city."

One month ago Cleveland reached cloud nine when its beloved Cavaliers NBA basketball team, featuring super star LeBron James, won the championship for the first time in its 46-year history.

Now it is the Republican National Convention, where party delegates are set to anoint billionaire Donald Trump as their presidential nominee, that is putting Cleveland in the global political spotlight.

The latest attraction: a $50-million refurbishment of Public Square, a once-depressing downtown block that has undergone a majestic transformation into a gorgeous public park.

The project has helped put Cleveland at the vanguard of urban revitalization.

"The city has great bones, David Fields of planning firm Nelson/Nygaard told AFP, using the city planners' expression to describe the essential elements of an urban community that are crucial for any city resurrection.

"It's got easy to use streets, transit systems, great parks all around," said Fields, 43, who was instrumental in the Public Square revival.

The Square was designed by landscape architect James Corner, best known for revitalizing the High Line, an elevated New York rail line that was converted into a public park.

"It's only been open two or three weeks, and... people are just loving it," Fields said of Cleveland's Public Square.

Some people however are clearly irritated by the security blanket draped over the city for this week's Trump show. Streets are blocked off, metal fencing forms security buffer zones, and authorities said they fear protests could turn violent.

Republican or Democrat, "everyone in Cleveland desperately wants this to succeed," said David O'Neil, a spokesman for the Republican convention.

"It's a rebranding opportunity for the city, and not many cities get this opportunity."

The city's jobless rate has dropped for five straight years, and Millennials have found Cleveland affordable.

Not everything has turned around in Cleveland though. Rusting manufacturing plants still mar the skyline, and huge processing facilities belch particles into the air, making the region one of the most polluted in America, although the air quality is improving.

But Cleveland in 2016 is a city on the rise, insisted Fields.

"I think it's in there DNA," Fields said. "It's what they believe their city has always been."