A festival air, and unease, hang over pre-convention Cleveland 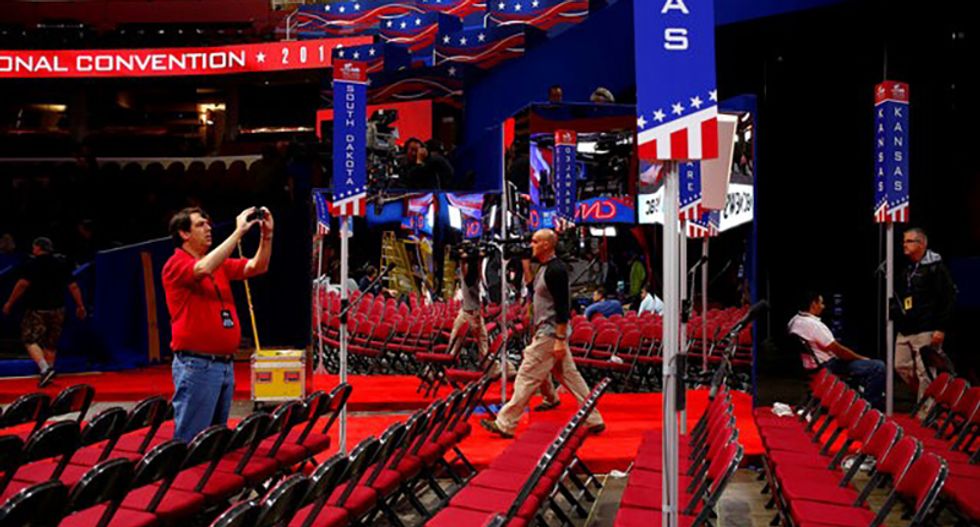 Members of the media work on the floor of Quicken Loans Arena as setup continues in advance of the Republican National Convention in Cleveland, Ohio, U.S., July 16, 2016. REUTERS/Aaron P. Bernstein

East 4th Street, emblematic of the new Cleveland as a once-downtrodden area turned trendy, is bristling ahead of the Republican National Convention.

Just ahead of the four-day convention that starts on Monday, a festival of commerce and smiling faces takes place a few steps from the so-called hard zone, delineated by a literal iron curtain that surrounds the sports arena where Donald Trump will be crowned the Republican presidential candidate.

"Ten years ago, this place was a dump. A wasteland," said John Lusk, 70, a semiretired publisher of a newsletter. "A group of young, hardworking entrepreneurs came in and look what they did."

The sunny celebration butts uncomfortably against a massive security operation that shows the other side of Cleveland's big moment. City and U.S. officials are preparing for the worst, aware that tensions over race relations and police use of force, as well as reaction to Trump's polarizing campaign, could result in violence on the streets.

Clevelanders are also aware of the backdrop for their convention: the mass shooting in Orlando that killed 50 people in June, the sniper attack that killed five Dallas police this month, and the truck assault that killed 84 this week in Nice.

On this same idyllic block just over a year ago, police in riot gear clashed with demonstrators reacting to the acquittal of police officer charged with manslaughter for firing 15 rounds into the car of an unarmed black man and woman, killing them both. More than 70 people were arrested, disturbing the al fresco dining experience on East 4th Street.

Unrest also followed the fatal police shooting in 2014 of 12-year-old Tamir Rice, an African-American who had a toy gun, and the officer who shot him was not charged with a crime.

Cleveland, a city of 390,000, has been revitalized in part by billions of dollars in infrastructure spending in recent years, but the black majority still lags behind.

Black Lives Matter, the protest group formed after a series of police killings of African-Americans raised questions about justice in America, held a protest on Saturday in Public Square. It was entirely peaceful, with about 100 activists clapping to speeches.

In between the civic protest and festival atmosphere, there are pockets of emptiness. Street closing and security cordons seem to have scared off customers at the Arcade, a late 1800s shopping mall that has been modernized. The ornate interior, illuminated by a skylight, is full of boutiques like Prosperity, which sells handcrafted art glass jewelry. Business is slow on a Saturday afternoon.

"A lot of people are afraid to come downtown," said Cat Zurchin, one of the artist/storeowners, from an empty shop. "Some of these stores opened up just for the convention. Retail people have been excited, but we also have some anxiety. The Secret Service is everywhere."

Black SUVs have invaded the city center as the U.S. Secret Service has taken charge of security. Concrete median barriers and the tall, anti-scaling fence circumscribe the city into impenetrable sectors.

A column of police ride through the city center on bicycles, a dozen more on horseback. Helicopters clatter overhead.

Cleveland police are trying to stay restrained, avoiding the militarized presence that has become common thanks to free war surplus equipment from the Pentagon.

Even so, the city's courts are preparing to process up to 1,000 arrestees per day, ready to stay open 20 hours a day.

Hospitals are bracing for the worst. The Cleveland Clinic, one of the largest hospitals in the country, will have 50 doctors, nurses and other medical personnel at the convention site and its entire staff on standby.

If needed the hospital can take over an adjoining hotel and conference center, enabling it to handle 1,000 general trauma cases. The hospital is prepared to operate without reinforcements for 96 hours.

"All boots on the ground," said Dr. Robert Willie, chief of medical operations.

Likewise, the Secret Service says it can handle the spotlight.

"We are prepared," said Ronald Rowe, the agent in charge of the convention, "and ready to welcome the world to Cleveland."