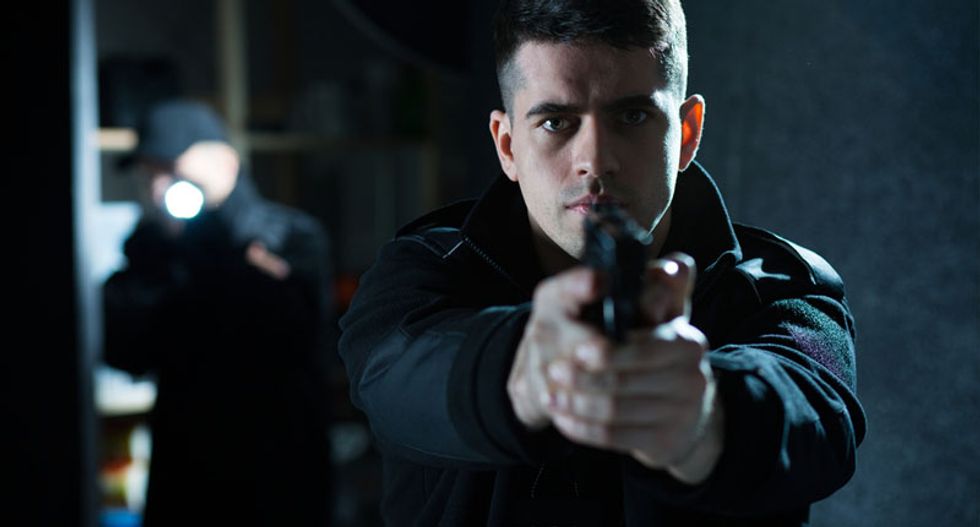 I have worked in law enforcement for 16 years, 13 of them as a sworn officer. I’ve spent my whole career in a suburb that has a majority black population. As a white person brought up in a typical suburban environment with little interaction with persons of color, I’ve learned a great deal in my years of work here.

While I squirm at some of the wilder anti-police rhetoric on the far left, I largely sympathize with the pain and anger behind the Black Lives Matter movement. However, working side by side with so many fellow officers for all these years, I also feel the strong pull of the blue brotherhood. Looking at the various shooting incidents and videos, and knowing how officers are trained, I can see the ambiguous circumstances that may have led to an incorrect “shoot or don’t shoot” decision in some of the incidents. In others I can see actions of people who never should have been officers in the first place.

Of course the incidents of the last week have been incredibly traumatic and painful for all “sides,” and I have been in plenty of deep conversations with people trying to think through and understand everything that has happened.

Here’s where I think all of us who came of age in the United States in the last 50 years can be unconsciously racially biased, without being “racist” in the traditional sense. We have all been steeped since birth in a culture full of racially-driven signifiers.

Think of how many hours of popular culture you have consumed over your lifetime: television, movies, books, comic books, advertising, and more. For most of that time there has been relatively little representation of people of color, and when they do appear, it is in very specific roles. When they are on the good guys’ team, they are one person on the cast, and often they are the one who gets killed off to emphasize the threat, like that unlucky schmuck in the red shirt who joins the away team with Kirk and Spock.

Every black actor can tell you, however, that even the redshirt roles are uncommon; the vast majority of parts they are offered are drug dealers, thugs, and gang bangers. They are almost never the central character, the complicated, multidimensional hero of the story. They are rarely even the everyday joes and jills in the background: the zany next door neighbor, the sarcastic co-worker, the witnesses interviewed by cops and detectives. The decent people just trying to live a decent life? They are almost always white.

We also see tons of crime stories on the local news, and most of those stories have pictures of black suspects. More black people live in big cities where most stations are located, but those stations reach way out into suburban and rural areas with a mainly white population. It’s a lot easier for the camera trucks to cover the crime stories right up the street from the station, and only go out to the burbs for the big splashy incidents. So the everyday crimes — the convenience store robberies and drug busts — that get covered almost always have black suspects, because they take place in the city.

The impression that a white viewer in the suburbs gets is that almost all crime happens in cities and among black people, with crime among white people as an anomaly. But guess what? There are convenience store robbers and druggies arrested in their neighborhood too. They are just too far from the news station to be worth covering unless there is a unique angle.

My point is that as Americans consuming American culture all our lives, there is a LOT of unconscious conditioning to see people of color as more likely to be criminals, and largely "not like us" when "us" is white people, because we rarely see people of color shown living everyday, average lives. If you grow up in a racially mixed or majority-minority area, this lack is offset by meeting people of different races and ethnicities in real life. But most white people in this country don’t live or grow up around many people of color.

Now take this person who has grown up consuming these cultural messages, and make them a cop. The crazy thing is that even black people are affected by this conditioning, although obviously it is more offset by real life experience with their own friends and family.

Any police officer interacting with any suspect on a traffic stop is hyperalert to signs of danger. Remember that “pattern matching machine” thing? A cop’s life can depend on fast pattern matching and fast response.  Thanks to our cultural programming, “Black person” is subconsciously a danger sign where “white person” is not. You are already primed to see a riskier situation with a black person—again, even black officers!

So any other cues like hasty or jerky movements, resistance, something that looks like a weapon, or an actual weapon that isn't being used or even touched--all of those can trigger the reaction to use deadly force a lot quicker. You begin the encounter a step or two closer to using deadly force, before observing any behavior.

With white people who have had very little interaction with anyone but white people there is also an "othering" factor—it’s easier to see someone who looks like you and the people you know and love as a whole person with their own priorities, loved ones etc. That can cause you to take just a little longer to decide that they are deadly force level dangerous—long enough for that split second, oh-shit panic to pass and see the signs that no, there isn’t a clear and present danger.

If the only thing you know about black people is a bunch of stereotypes and assumptions from limited exposure, you are less likely to see them as a three-dimensional person like you, and it’s more likely that the ball drops the other way in that oh-shit moment.

So yes, it is possible to react out of fear and panic. Most of the shootings of black suspects are not done by officers with KKK-style racism in their hearts.  But the fact that black people end up dead in encounters more often than white people IS a product of racism.

As responsible citizens, we can't just shrug and say, my bad, can't help it, it's my subconscious programming. We have to fight it, we have to double check our gut reactions, and we have to understand the conditioning that we have all received. It's still racism and it is still killing people.