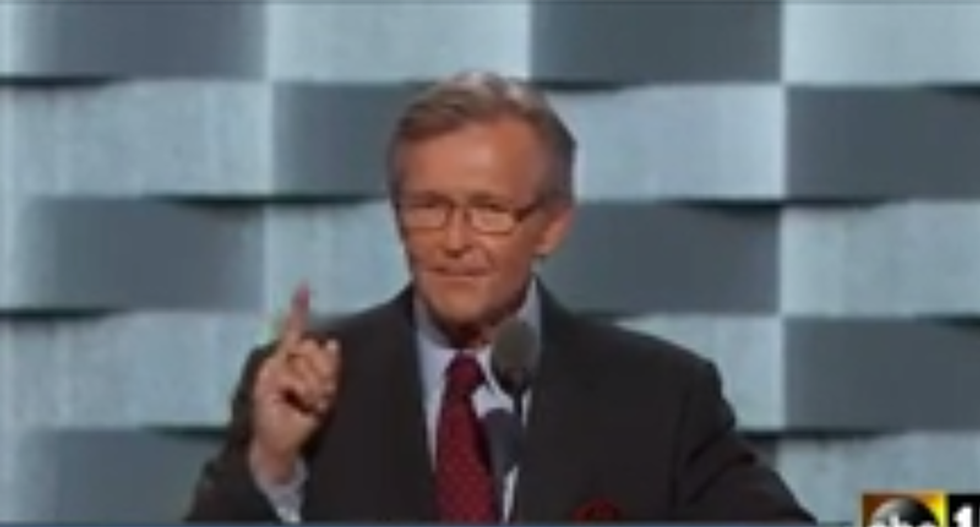 In an evening filled with national security experts and distinguished service members, retired Rear Admiral John Hutson ripped Donald Trump up one side and down the other.

He began his speech saying that he knows an awful lot about something that GOP nominee Donald Trump doesn't: Law and order.

"Donald Trump calls himself the 'law-and-order candidate,' but he'll violate international law. In his words, he endorses torture 'at a minimum.' He'll order our troops to commit war crimes like killing civilians. And he actually said, 'You have to take out their families." And what did he say when he was told that's illegal? He said our troops 'won't refuse, believe me.' This morning, he personally invited Russia to hack us! That's not law and order. That's criminal intent!"

One of the worst things Admiral Hutson felt Trump has done is disrespect our veterans. "He lies about donating to our veterans and called the military I served in a 'disaster,'" he said. "It's embarrassing enough that he's the face of one of our political parties. The real disaster is what would happen if we let Donald Trump become the face of the country we love."

Watch the video and see the rest of the full text of the speech below:

But America, we have a better choice. Hillary Clinton is the only candidate who knows how to work with our allies and who has a specific plan to defeat ISIS. She is smart and steady. She has the experience, temperament, and spine to be a superb Commander-in-Chief. She knows what makes us the envy of the world. It's not our abundant natural resources, our resilient economy, or even that we have the strongest military on earth. Our strength comes from who we are, our humanity. If we lose our humanity, we lose the battle and the war.

ISIS and other radical Islamic groups have no humanity. That is their weakness. Our enemy can't defeat us militarily. Victory won't be found on the battlefield. For them, victory is to make us more like them: people who torture, who destabilize the international order, who target innocents because they don't look like them or don't pray like them. Donald Trump is a walking, talking recruiting poster for terrorists. That's not hyperbole. ISIS literally used Trump in a commercial.

You know, you can tell a lot about a person by whom they admire. Eleanor Roosevelt, Nelson Mandela, Dorothy Rodham – these are Hillary Clinton's heroes. Donald Trump admires Donald Trump and Saddam Hussein and Kim Jong-un. And of Vladimir Putin, he said, and I quote, "in terms of leadership he's getting an 'A.'"

I taught national security law. Praising dictators is an automatic "F" in my class. In the 2008 election, as the dean of the University of New Hampshire School of Law School, I invited each presidential candidate to talk about terrorism with me and other retired admirals and generals. Of all the candidates we met with, Hillary Clinton was by far the best prepared and most knowledgeable. She listened carefully and tested our arguments. We had more than 500 years of collective experience, and we learned from her. This was before she served as our Secretary of State. Before she brokered a cease-fire in Gaza, rallied the world to sanction Iran, advised President Obama to take out bin Laden, and restored our reputation in the world.

Anyone who's served with the young men and women of our armed forces knows how serious it is to send them into harm's way. When you're a soldier, sailor, airman, or marine, you don't get to choose your commanders. But when you're a citizen – you have the responsibility to choose the Commander-in-Chief who will keep us safe, strong, and secure. Choose Hillary.