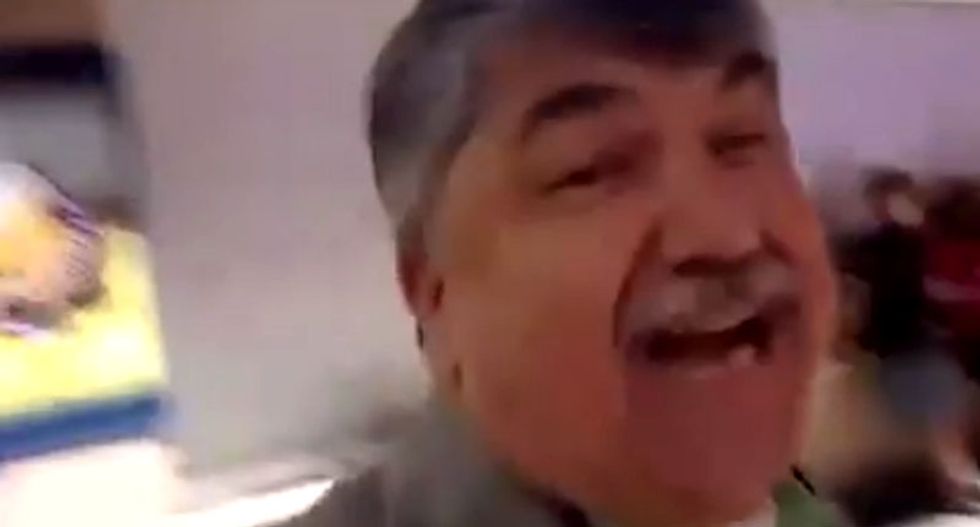 I couldn’t believe my good fortune when I spotted AFL-CIO president Richard Trumka striding through the halls of the Wells Fargo arena hosting the Democratic National Convention. Thick as a seam of coal, the former United Mine Workers of America president was flanked by aides but not buried in a press scrum like other bigwigs.

I sprang into action, livestreaming as I asked Trumka what organized labor has achieved at the DNC. He said, “All the rules we’re talking about changing, the rules of the economy, to work for working people. The whole platform is ours.”

Indeed, the Democratic Party lays out an ambitious agenda of raising the federal minimum wage to $15 an hour, making union campaigns easier, and bolstering retirement programs. But these are just promises, and Barack Obama’s vow in 2008 that he would ride to the rescue of embattled unions as president turned out to be hollow.

That includes Obama’s flip-flops on free trade, reneging on his promise to renegotiate NAFTA, and then exerting every shred of his political muscle to win fast-track approval for new trade deals like the Trans Pacific Partnership.

So I asked Trumka, “Aren’t you afraid once she gets into office she’ll support free-trade deals?” Trumka responded, “No, I’m not worried at all, she’s against TPP.”

Before I could point out that Clinton voted for or supported eight of ten free-trade deals as a New York senator, Trumka smacked me in the face with a flimsy cardboard sign, declaring, “We’re done. We’re done.”

I laughed in surprise, but the question of free trade is utterly serious as long-time Clinton confidant and Virginia Gov. Terry McAuliffe claimed at the convention that Hillary Clinton would support TPP once in the White House (which her campaign denied).

McAuliffe’s damaging remarks are why 15,000 media workers descended on the conventions. They are looking for these unscripted moments that clash with what are designed to be four-day-long commercials for the nominees.

I stumbled on a few of those moments at the RNC. I was manhandled after interrogating notorious boxing promoter and Trump enthusiast Don King about allegedly pilfering a million dollars from Muhammad Ali. Peppering former Texas governor Rick Perry about not being short-listed as a vice-presidential candidate for Trump despite all but begging for the job, did not earn me an answer, though I received an elbow to the nose from his security. Turns out the foremost threat to bodily harm is not the over-hyped danger from protesters, but the ruling elite and their attack dogs.

Otherwise the RNC was dismal, only notable for being a third-rate Nuremberg rally with a sewage pipe of hate spewing from the stage. Lacking a Clint Eastwood grilling a chair, Trump settled for an underwear model and Chachi as star power. The musical act was a no-name house band competently covering rock hits about prostitution, drug dealers, adultery, and gay pride. Lone corporate lobbyists scuttled along Cleveland sidewalks, shying away from the glare of the press.

The RNC does reflect a large swath of the country, at least Middle America. There were few Richie-Rich Republicans, a sign of how many in the GOP Trump has alienated. The convention was overwhelmingly white, with people of color acting as tokens in the audience and minstrel show on stage. Downtown Cleveland looked as if a giant cruise ship ran into it, toppled over, and spilled out 25,000 white folk in tee shirts and shorts.

In contrast, the DNC is boisterous and diverse. A-listers parade across the stage, including Meryl Streep, Elizabeth Banks, Lenny Kravitz, Angela Bassett, Sarah Silverman, and Paul Simon. The DNC drips with wealth as evidenced by designer outfits, spa complexions, and a man worth $47.5 billion slotted in as a prime-time speaker. One can greet political heavyweights past, such as former New York City Mayor David Dinkins and ex-California Gov. Gray Davis, while lights and camera orbit rising stars like Julián Castro. The “moneyed elite” are out in force, at least in smokeless backrooms and ritzy bars.

But to the chagrin of the party planners, democracy has broken out in the corridors of power. With some 1,900 Sanders delegates on the inside, protests are epidemic, whether it’s an anti-TPP bloc in the halls, chants of “No war” in the arena, or official signs repurposed to read “Stop Her” held aloft.

Even as an epic showdown looms between Trump’s nuclear ego and the Clinton-Obama Juggernaut, each party is still divided. Despite the breathtaking dangers represented by Trump and his white-nationalist rabble, few Americans are genuinely enthused Clinton because of her checkered past and check-bearing benefactors presently gathered around her. But amid all the fire and smoke there are glimmers of democracy. And that is a rarity in the American political experience.