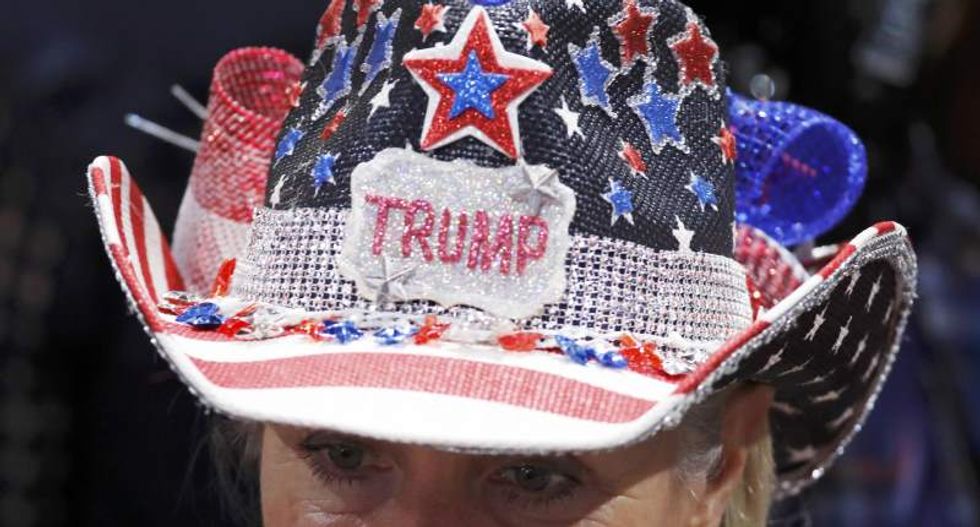 A delegate with a beaded Trump hat is seen at the Republican National Convention in Cleveland, Ohio, U.S. on July 19, 2016. (Reuters/Jim Young)

After vanquishing 16 party rivals, warring with much of the Republican establishment and sparking controversy at the party convention, Donald Trump on Tuesday secured the party's 2016 nomination for the White House.

His eldest child, Donald Trump Jr., announced the support of New York, their home state, during a roll-call vote at the Republican National Convention, ensuring Trump had the majority of delegates - 1,237 - needed to contest the Nov. 8 U.S. presidential election against presumptive Democratic nominee Hillary Clinton.

With three of the candidate's other children at his side, the younger Trump said: "It is my honor to be able to throw Donald Trump over the top in the delegate count tonight."

"Congratulations, Dad. We love you," he said.

Trump's Democratic rival, Clinton, was quick to respond, tweeting after the vote: "Donald Trump just became the Republican nominee. Chip in now to make sure he never steps foot in the Oval Office."

The state-by-state vote to put Trump's name in nomination took place a day after opponents staged a failed attempt to force a vote opposing his candidacy, and after a speech by his wife, Melania, drew accusations of plagiarism.

A wealthy New York real estate developer and a reality TV celebrity, the 70-year-old Trump was a long shot when he entered the race for the Republican nomination more than a year ago, having never held elected office.

Speaker after speaker on Monday, the first day of the four-day convention at Cleveland's Quicken Loans basketball arena, took aim at Clinton, presenting her as out of touch with the concerns of ordinary Americans and the inheritor of President Barack Obama's "oppressive" administration.

Clinton, 68, was due to be formally nominated at the Democratic convention next week in Philadelphia.

Trump initially refused to rule out an independent run should he fail to win the Republican nomination.

Within weeks of announcing his candidacy at Trump Tower in New York on June 16, 2015, Trump had taken a commanding lead in the Republican race, defying pundits who were quick to write him off and eclipsing the man many had thought would be crowned on Tuesday night - former Florida Governor Jeb Bush, part of a Republican political dynasty.

In a campaign marked by insults and inflammatory rhetoric, Trump tapped into a deep vein of unhappiness running through white Middle America, giving voice to millions who felt left behind in the rush to globalization and who eschewed traditional establishment Republicans like Bush in favor of a brash New York political outsider who promised to "Make America Great Again".

Opponents branded him a bigot with his calls to temporarily ban the entry of Muslims and to build a border wall with Mexico to keep out illegal immigrants.

Steinmeier told Reuters in a written interview that he was concerned about what he called Trump's ambiguous vows to "make America strong again," while simultaneously reducing its engagement overseas.

Party officials are hoping to use the convention to smooth out some of his rough edges and present him as a job creator and a strong hand to combat security threats at home and abroad.

The theme of Tuesday's convention events was "Make America Work Again," and speakers were to take aim at Obama's record on the economy.

U.S. Senator Jeff Sessions of Alabama, an early backer of Trump, placed Trump's name in nomination, calling him "a warrior and a winner."

Two senior Republicans, House of Representatives Speaker Paul Ryan and Senate Majority Leader Mitch McConnell, were due to speak in favor of Trump. Republicans need Trump to do well in the November election as they seek to preserve Republican majorities in Congress.

Trump trails Clinton in many opinion polls after a bruising Republican primary season.

Trump narrowed his deficit against Democratic rival Hillary Clinton to 7 percentage points from 15 points late last week, according to a Reuters/Ipsos poll released on Tuesday.

In Melania Trump's roughly 15-minute address on Monday night, a small section closely resembled a part of Michelle Obama’s speech in 2008 in support of her husband, Barack Obama, who was then campaigning for his first term as president.

In that section, Melania Trump, a Slovenian-born jewelry designer and former model, talked about passing on to the next generation the value of hard work that she inherited from her parents and said "the only limit to your achievements is the strength of your dreams and your willingness to work for them."

In a Twitter post on Tuesday, Donald Trump himself made no mention of the accusations about plagiarism, saying simply: "It was truly an honor to introduce my wife, Melania Trump last night. Her speech and demeanor were absolutely incredible. Very proud!"

Security forces were on high alert in Cleveland. Wright State University, a public university near Dayton, Ohio, said on Tuesday it had decided not to host the first U.S. presidential debate scheduled for Sept. 26, citing mounting costs and security concerns. The event will now be held at Hofstra University in New York.