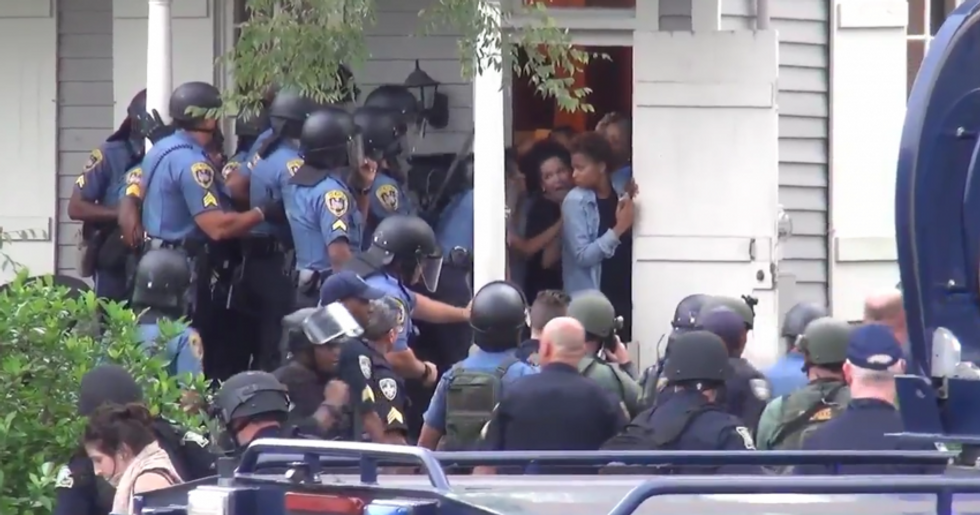 Baton Rouge Police move in to arrest protesters who were invited to demonstrate at a resident's property (Screen cap).

A Baton Rouge homeowner invited Black Lives Matter protesters to have a rally on her property -- but that didn't stop cops from arresting dozens of them.

"I'm very upset," she told CBS News. "I'm stunned at the behavior of police officers that utilized, from what I understand, the ability to take someone that I guess they targeted that was actually on the street, to bombard my yard and bombard my house."

The protesters had been peacefully protesting on her property for around 90 minutes, The Daily Beast reports, when officers in riot gear started moving in. At this point, protesters started yelling at the officers that they were trespassing on private property.

The police justified their aggressive behavior by claiming that protesters had been planning to march down to the highway and form a blockade. The police decided to preempt this action by blocking off the interstate ramps themselves, local news station WWLV reports.

Check out videos of both the police breaking up the protest and the homeowner upset by their actions below.