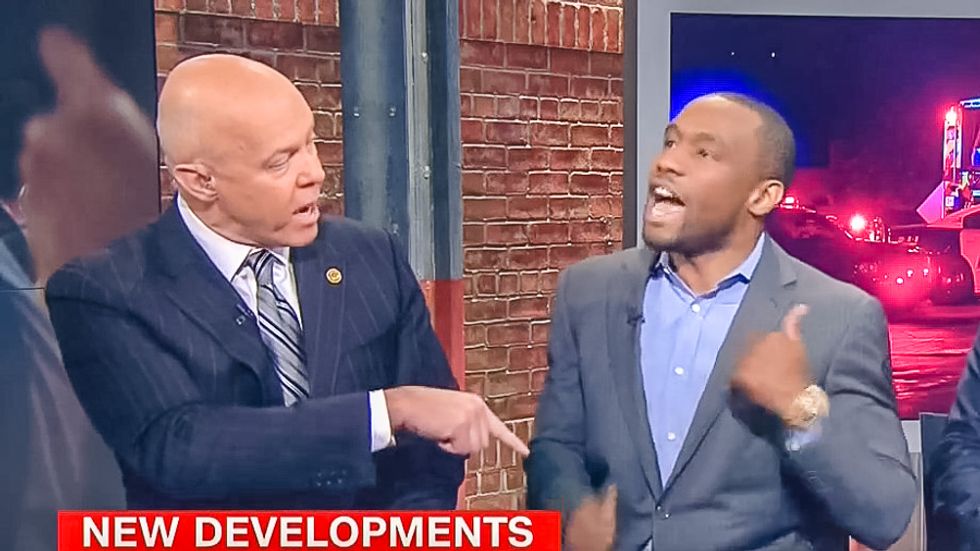 A CNN law enforcement analyst promoted a video on social media that declared African-Americans are responsible for most of the violent crime in the U.S.

On Monday,  Media Matters reported that Harry Houck tweeted a video from Atlanta radio host and men's rights activist Tommy Sotomayor, in which Sotomayor claimed that "Obama shouldn't try to ban guns. He should ban n****s."

Media Matters wrote that Houck, a retired NYPD detective and CNN analyst, linked to Sotomayor's video on the former cop's personal Twitter account, exclaiming that the radio host "knows what he's talking about!".

The video was posted on the Facebook page, Uncle Sam's Misguided Children, which describes itself as a "Community founded by Marines to expose the mainstream media," and notes that it shares "news you might not see anywhere else with a Non-PC Attitude."

In the video, Sotamayor, who is black, uses misleading crime statistics to claim that African-Americans are a more serious threat than guns. The radio host uses images of black Americans rioting and engaging in vandalism, and declares that "52 percent of murders in the United States were committed by black people," while noting that "black people only represent 13 percent of all people in the United States."

"There are more people murdered in a day by niggly bears than in a year by grizzly bears. Niggly bears are out there, just killing everyone that they can, but people are told that they're racist if they want to avoid them."

But Sotomayor's statistics are seriously misleading. As the Huffington Post noted in September 2015, black Americans are more heavily policed than white people, particularly since most black citizens live in urban areas with high population densities. The Huffington Post argued that African-Americans are also far more likely to be imprisoned than white Americans for the same crime:

When black people are convicted of a crime, they are more likely to be sentenced to incarceration compared to whites convicted of the same crime.

When a person is convicted of a crime, a judge often has discretion in determining whether the defendant will be incarcerated or given a less severe punishment such as probation, community service, or fines. One study found that in a particular region blacks were incarcerated for convicted felony offenses 51% of the time while whites convicted of felonies were incarcerated 38% of the time. The same study also used an empirical approach to determine that race, not confounded with any other factor, was a key determinant in judges’ decisions to incarcerate.

This is not the first time that Harry Houck has championed dubious research and racist stereotypes about black people. Media Matters reported that the CNN analyst has a long history of race-baiting on the news network. The analyst once claimed on CNN’s New Day that black communities are heavily policed because blacks commit crimes at higher rates than whites, and he has also called Black Lives Matter a "thug group."

Media Matters noted that most recently, Houck appeared on CNN's Reliable Sources on July 17, where the retired NYPD cop tried to connect the shooting of three Baton Rouge police officers to the protests surrounding the police-related killing of Alton Sterling.