Democratic National Convention starts under the cloud of leaked emails 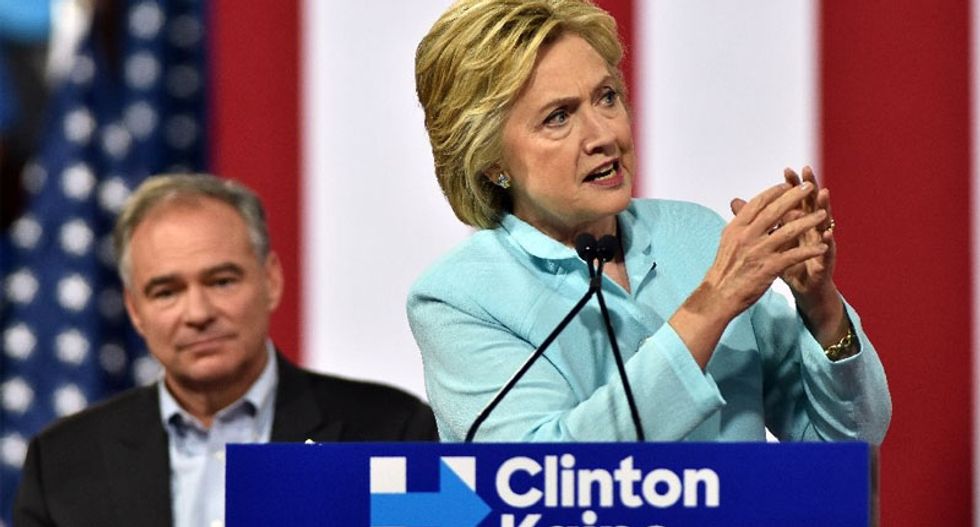 The Democratic National Convention got off to a rocky start Monday, with a major internal row over leaked emails playing havoc with nominee Hillary Clinton's bid to present a united front against Donald Trump.

Two new polls showed Trump surging since his nomination last week as the Republican presidential candidate, with a CNN poll putting him three points ahead of Clinton.

The Democratic convention gets gaveled to order at 4:00 pm (2000 GMT), but even before it began Democrats were scrambling to contain the damage caused by thousands of leaked emails that showed party leaders had sought to undermine Clinton's primary rival, Bernie Sanders.

The Federal Bureau of Investigation said it was investigating the "cyber intrusion" at the Democratic National Committee, which the Clinton campaign blamed on Russian hackers bent on helping Trump.

The agency said in a statement it was "working to determine the nature and scope of the matter."

Sanders lost the primary race but he has endorsed his bitter rival, and in a show of unity he has been offered a prime speaking slot on the opening day of the four-day confab.

Sanders will stress that the party mission is to elect Clinton in November and prevent Trump from becoming the 45th president of the United States.

The brash billionaire topped Clinton 48 to 45 percent in a two-way matchup in the CNN poll. The figure represents a dramatic six-point convention bounce.

While the former secretary of state is set to make history as the first female nominee of any major American political party, the process has been thrown into turmoil.

Anti-secrecy website WikiLeaks at the weekend released nearly 20,000 emails from between January 2015 and May 2016, gleaned by hackers who apparently raided the accounts of seven Democratic National Committee leaders.

At least two of the messages showed senior committee members were keen to undermine the Sanders campaign by seeking to raise questions about Sanders's faith and Jewish heritage.

Democratic National Committee chairwoman Debbie Wasserman Schultz abruptly announced her resignation on Sunday, effective at the end of the convention.

But frustrations about the crisis boiled over Monday when delegates loudly booed the DNC chief as she addressed her Florida delegation.

After a hard-fought primary campaign, the party had seemed to be heading to the convention far more unified than the Republicans, whose fissures were laid bare at their convention in Cleveland last week.

Instead, Democrats now are struggling with the fallout from the DNC scandal just as the party was about to coalesce around its nominee.

"The Democrats are in a total meltdown," Trump taunted on Twitter. "E-mails say the rigged system is alive & well!"

Trump has long sought to scoop up disaffected voters who feel Sanders -- a self-described democratic socialist -- was denied a fair shot at the nomination.

Wasserman Schultz's announcement came after Sanders on Sunday repeated calls for her to go, with her leadership already under fire and her impartiality called into question by the leaks.

Shortly after she resigned, Sanders said in a statement that Wasserman Schultz "has made the right decision for the future of the Democratic Party."

Wasserman Schultz said she would still open and close the convention, but the move carries risks, especially if she is booed like she was in the pre-convention meeting.

"Our party is coming together here to unify to elect Hillary Clinton and defeat Donald Trump, and that's what you're going to see today," he said.

But on the event's periphery, concern persisted.

"We need to move on. This is about unity," Pennsylvania Governor Tom Wolf told CNN.

Democrats "continue to have disagreements within the party," he added. "At the end of the day, we're going to have to unite to defeat Donald Trump in November. If we don't unite we're not going to win."

Recently added to Monday's program is liberal Senator Elizabeth Warren, whose support for Clinton could help convince skeptical left-wing voters to get behind the nominee.

Thousands of pro-Sanders protesters have gathered in Philadelphia, with the largest demonstration expected Monday.

Many in the Sanders camp have also voiced disappointment with Clinton's choice of a center-left running mate, Senator Tim Kaine of Virginia, instead of a more liberal firebrand like Warren.