Diners slaughtered in terrorist attack on cafe in Bangladesh 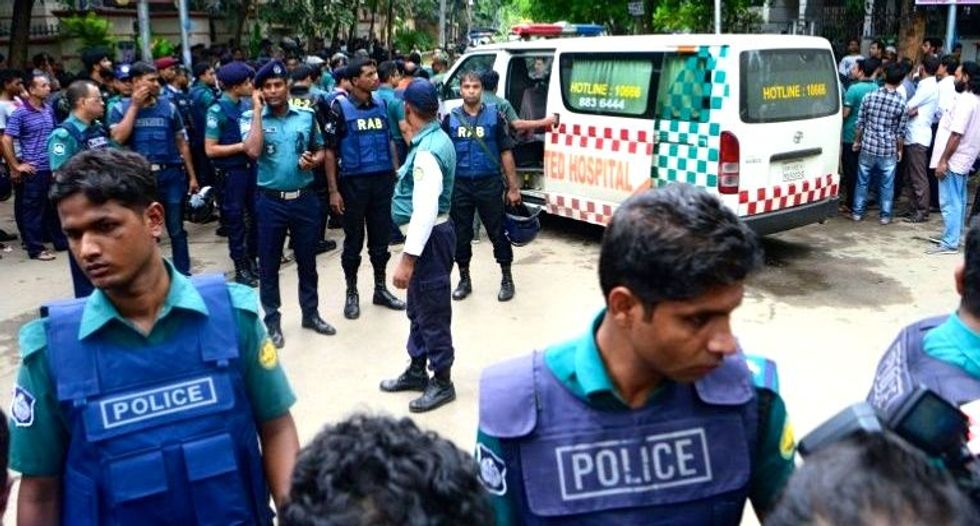 Bangladeshi police man an intersection of a street leading to an upscale restaurant after a bloody siege ended in Dhaka on July 2, 2016 (AFP)

As diners relaxed for their evening meal on one of the last days of Ramadan, the gunmen burst into the restaurant before separating foreigners from locals so they could launch their killing spree.

By the time Bangladeshi commandos stormed Dhaka's Holey Artisan Bakery 11 hours later, its stone-washed white floors were a sea of blood, strewn with the bodies of foreigners who had been hacked to death.

The Western-style cafe was a popular bolt-hole for expats and locals in the upmarket Gulshan neighbourhood which has long been home to the country's wealthy elite and many embassies.

On Friday night, Hasnat Karim had brought his family to celebrate his daughter's birthday.

Hasnat was too traumatised to say more than a few words about his ordeal, saying only that the hostage-takers "did not misbehave with us".

But he detailed to his father Rezaul how the gunmen -- who were armed with automatic weapons, bombs and makeshift machetes -- had split the diners into two groups.

"(The foreigners) were taken to the upper floor and the Bangladeshis were kept around a table," said Rezaul Karim.

In the chaos and confusion that erupted at the start, many diners were able to scramble to safety.

One man who escaped told India's ABP News channel how the gunmen chanted slogans as they forced their way past the sole security guard on the door.

"I rushed to alert others, some people managed to escape from a back route but the rest were trapped," he said on condition of anonymity.

"They made people stand in a line. There must be about 20-25 staff and about 20-25 guests and then they switched off the lights and CCTV."

Bangladesh, where around 90 percent of the population is Muslim, has just begun a week-long holiday to enjoy the Eid celebrations which accompany the end of Ramadan.

As news of the siege spread, police rushed to the scene and engaged in gunbattles with the hostage-takers but they met heavy resistance.

"(The hostage-takers) had automatic weapons and bombs," said Diego Rossini, an Argentinian chef who escaped into a neighbouring building.

"The hostages (who had escaped) were hiding and police were shielding them," Rossini told Argentina's television channel C5N.

Rossini managed to escape into a next-door building while under fire.

"I felt bullets pass so close to me, I felt fear like I've never felt in my life."

Images posted by the Islamic State group as they claimed the attack showed two bodies soaked in pools of crimson.

A senior army officer said that all 20 of the slaughtered civilians were foreigners and nearly all were hacked to death with makeshift machetes.

Several dozen people have been attacked in similar fashion by Islamist extremists in the last two years, mainly members of religious minorities.

A senior officer who was part of the operation which ended the siege on Saturday morning described a gruesome scene inside the cafe.

"We saw blood in many places and were shocked to see the carnage," he told AFP on condition of anonymity.

"We heard the gang saying Allahu Akbar and there was a slogan written on the wall which said Allah would grant them Jannatul Ferdous (ultimate heaven)."

Among the weapons recovered from the scene were pistols, automatic rifles and sharpened machete-style blades.

Apart from the slain hostages, the bodies of six gunmen were also recovered.

The officer who took part in the storming said the attackers were all men in their early to mid-20s.

"They were wearing sneakers and pants, with multiple pockets where they kept IEDs (improvised explosive devices)," said the source.

Popular for its breads and leafy garden the Holey Artisan Bakery describes itself on Facebook as the "only truly Artisan Bakery Shop between Mumbai and Singapore", with mouthwatering images of pastries.

The site was deluged Saturday with messages of prayer and concern from local Bangladeshi diners and others around the world.

"Praying for those innocents and may Almighty curse those extremists... they can't be Muslim. These extremists are monsters," wrote a Facebook user named Siragis Salekin.