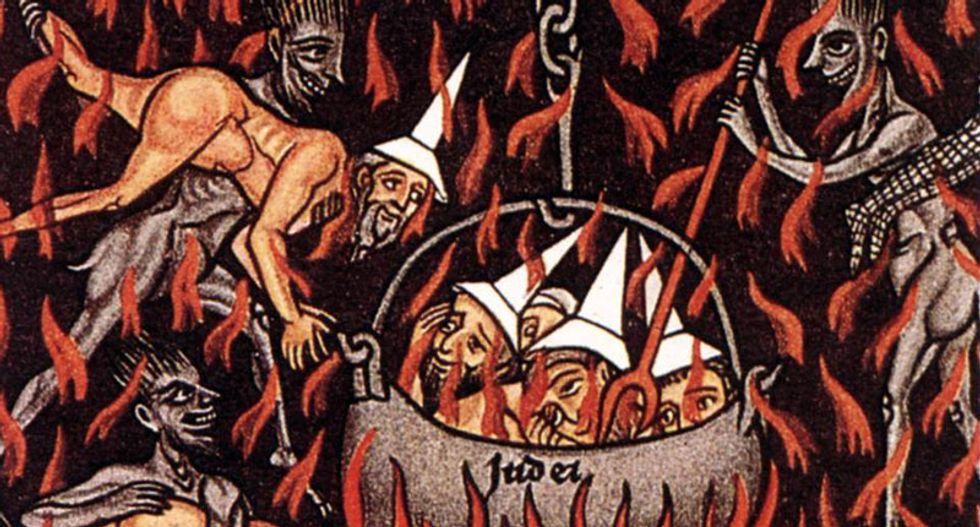 When Donald Trump tweeted out an image of  the Star of David and a pile of money to symbolize Hillary Clinton's "corruption," he was doing more than flirting with the juvenile fascists who hang around at alt-right websites or hide behind the white robes of the Ku Klux Klan. Critics were quick to accuse Trump of anti-Semitism, with some then offering as proof of Trump's calumny images of Jews wearing yellow Stars of David in Nazi-era Europe. Others offered parallels between Trump and two of America's most famous 20th century anti-Semites: Henry Ford, who saw "the international Jew" as the world's greatest threat; and Charles Lindbergh, who admired Adolf Hitler and his ability to safeguard white civilization from the "Asiatic" threat.

While 20th century anti-Semitism is the type of virulent hatred of Jews with which most people are familiar, it is crucial to remember that Hitler's "Final Solution" for eradicating the Jewish people and their religion from Europe did not spring ex nihilo from the pages of Mein Kampf. Western European anti-Semitism has its roots deep in the soil of European civilization. In fact, it is difficult to understand anti-Semitism in Western Europe without understanding the role that Christians and Christianity played in promulgating that fear of "the Jew." What follows is only a small part of the history of anti-Semitism, and does not take into account how anti-Semitism was promulgated and institutionalized in Eastern Europe and the modern-day Middle East.

While anti-Semitism is often argued to be a misnomer because "Semitic" people include other peoples besides Jews, I'm using the term "anti-Semitism" in accordance with the distinction that historians such as Gavin Langmuir have made. For the sake of argument, anti-Semitism is an "irrational fear and/or hatred" of Jews. Anti-Judaism is an objection to the Jewish religion, the kind of objections that a religious scholar may have. But when Donald Trump equates the Star of David with money, that is not anti-Judaism; it's anti-Semitism. There is nothing rational in the tying together of symbols associated with Israel and corruption, unless one is looking at the sheer irrational fear and hatred at the base of anti-Semitism.

So, how is that irrational fear of Jews tied to Christianity? Christian attitudes toward the body are complicated. Jesus assumed the flesh of a man and then became spirit. In the Book of Genesis, Eve's sin in eating from the tree of knowledge was to reveal to humanity its carnality and thus, its mortality. That fear of death drives many of the reasons that Christians seek to avoid "sin," and why sin often gets projected onto those who lie outside the community.

In an attempt to understand how Jesus could be both man and God at the same time, medieval writers concerned themselves with such questions as "did Jesus shit?" and "did Jesus cry?" (Both questions are answered in the Malleus Maleficarum.) But because the ultimate form of spiritual life was seen to be practiced by he (and it was "he") who needed his body the least, the human body and its attendant needs and desires were denigrated, denied, and even labeled as the parts of the human body most susceptible to the temptations of evil and Satan.

The failure of Jews to convert to Christianity was a source of consternation. While the official papal policy was that Jews were under the protection of the Pope, increasingly, Jews became targets of restrictions imposed by secular rulers, burdensome taxes, and, beginning in the twelfth century, as the focus of paranoid beliefs that did more to affirm the Christian belief in the sanctity of the crucifixion of Christ rather than actual practices of Jewish communities. Jews were seen as less spiritual as Christians. Lacking spirit, they were more "of the body." And, as such, they were more prone to evil, corruption of the flesh, and sin.

In the 12th century in England, a young boy named William was found dead in the town of Norwich. One of the local monks asserted that Norwich's Jewish community had crucified William as a re-creation of the passion of Christ. Of course the Jews had nothing to do with William's death, but the belief that the Jews would believe that there was something so "magic" about Christ's death that they would seek to repeat it served to strengthen Christian belief. And, of course, it also lead to persecution of Jewish communities, and continued to do so for many years until the Jews were expelled from England in 1290.

As if believing that Jews replicated the killing of Christ wasn't insane enough, with the institutionalization of the idea in 1215 at the Fourth Lateran Council that the Eucharist was transformed into the actual body and the actual blood of Christ during the Mass, the beliefs about Jews got even more fantastical. In 1235, in Fulda, Germany, a new anti-Semitic idea was born: the blood libel. This belief was that during Holy Week (which roughly coincides with Passover, which makes sense since the Last Supper was a seder) Jews needed the blood of Christian boys to make matzoh and they also needed the blood to drink in the ceremonial cups of wine served with the seder. This belief that Jews needed Christian blood appears to be the deep-seated anxiety about participating in the now-cannibalistic rite of the Mass and projecting that onto Jews. In addition, because of the continued anxiety about the body, especially the female body, it was even asserted that Jewish men menstruated and that they needed the blood of Christian boys to make menstruation cease.

The beliefs in ritual murder and the blood libel spread throughout England, France, Germany, Italy, and other parts of Western Europe. In Italy in the 15th century, a Franciscan Observant preacher named Bernardino da Feltre preached Jew-baiting sermons each year, especially in the days leading up to Holy Week, in which he warned those who listened that the Jews were out to steal young boys. In 1475, in Trent, young Simon disappeared. The Jews of Trent were accused of having drained his blood, and that image was circulated widely throughout Europe. The images of Simon of Trent, especially for a population that remained largely illiterate, in an age that had seen the advent of the printing press, now made it possible for a large number of mechanically reproduced images of Simon's "murder" to spread far and wide. Those images -- even after they had lost their immediate ties to Simon -- forever linked Jews to the killing of young boys. 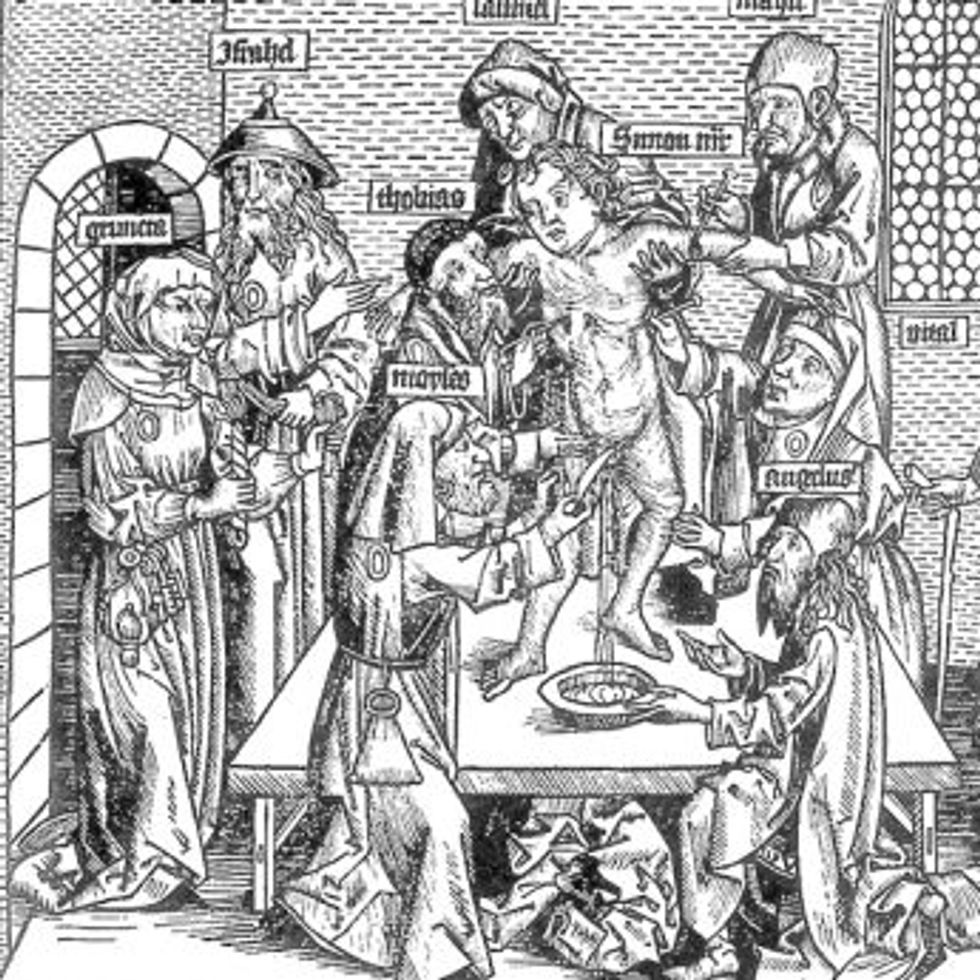 Images have consequences. Anti-Semitism is such an ugly belief system that it has developed yet another way of linking Christian disgust with the mortality of the human body with hatred of Jews. When Donald Trump draws on images of pigs' blood as a means of defiling the bodies of Muslims, he draws dangerously close to yet another way that Christians sought to dehumanize Jews.

Despite the fact that when modern-day Christians want to argue that God doesn't like gay people, they have to cite the Old Testament in order to find the proof, one of the "freedoms" that being a Christian offered to the believer was to be free of the laws that Jews are required to follow in the teachings of the Talmud and the Torah. Thus, Jews are circumcized, and they are not allowed to eat pork, among other things. Christians took the image of pigs -- knowing that Jews regarded them as unclean animals -- and linked Jews to pigs in an image known as the judensau. The image, which could be found carved on the lintels of church doorways, was a filthy image that showed Jews sucking from the teats of a sow, but also reading the Torah on the anus of the pig. It showed Jews receiving succor from the swine, but also depicted Judaism as a religion literally mired in shit. Such dehumanization in image, especially one that does not require a specialized knowledge to read, nor being in a special place in order to see it, all contributed to a sense that Jews were blood-sucking, filthy "others" who were not fit to live among Christians.

The parallels to what Trump is doing are not lost on those with a background in anti-Semitism's historical manifestations. Jo Miller, executive producer of Full Frontal with Samantha Bee, wrote on historical anti-Semitism while a graduate student at Cambridge University in England.

"The thing about anti-Semitic imagery is that it's generally accompanied by violence," Miller says. "The degree of violence often depends on the anti-Semites' level of cowardice. By legitimizing this vile discourse, [Trump] emboldens armchair white supremacists lurking in their basements and venting on message boards." Miller points out that the same week that Samantha Bee called out Trump for his "America First" declarations, MP Jo Cox was murdered in England by an extremist who shouted "Britain First!" before attacking her.

Miller continues: "Winking at the white supremacist underground while playing dumb about it isn't playing with fire. It's playing with nukes."

The Devil and the Jews by Joshua Trachtenberg (reprint Yale: 1983)

Toward a Definition of Antisemitism by Gavin Langmuir (California: 1990)

"The Development of the 'Ritual Murder' Accusation in the Twelfth and Thirteenth Centuries and Its Relationship to the Changing Attitudes of Christians Towards Jews" by D. Jo Miller, (M.Phil. thesis, Cambridge: 1991)

The Jew in the Medieval World: A Source Book ed. by Jacob R. Marcus (Atheneum: 1981)

The Judensau: A Medieval Anti-Jewish Motif and Its History by Isaiah Shachar (Warburg: 1974)