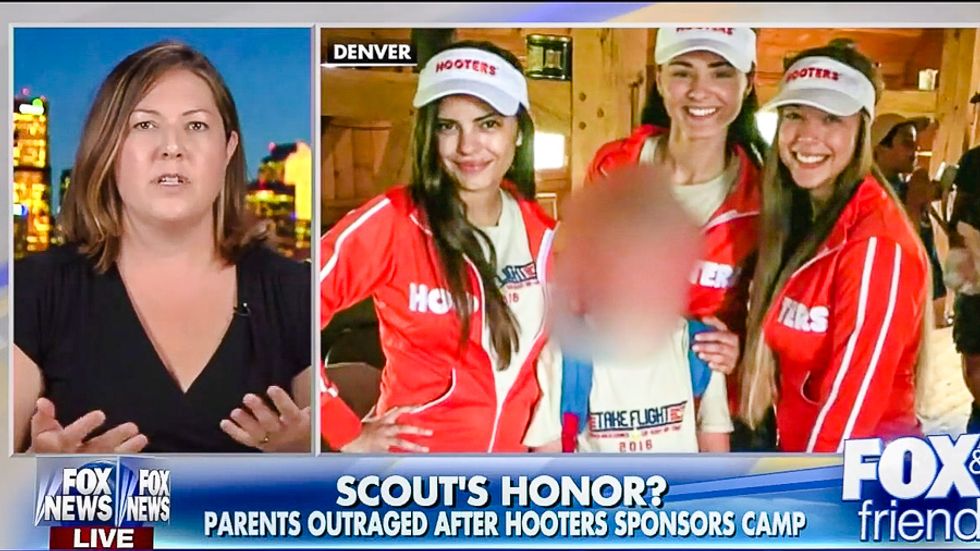 The hosts of Fox & Friends on Tuesday grilled a Colorado mother about why she was upset that Hooters waitresses were invited to attend a Cub Scout camp wearing their work uniforms.

Michelle Kettleborough was picking up her 7-year-old son from Frontier District Day Camp recently when she noticed that some of the volunteers were wearing visors with the Hooters logo.

The Boy Scouts of America Denver Area Council told KMGH-TV that Hooters had asked to sponsor the camp. Hooters Colorado later took down photos on its Facebook page of waitresses in Hooters gear posing with boys at the camp.

In a statement, the Boy Scouts of America apologized for allowing Hooters-branded clothing at the camp, but the organization made no mention of the decision to partner with Hooters.

"The group of trained volunteers mistakenly wore the wrong attire and it was addressed by our Council leadership," the statement said. "We extend our apologies for this mistake and look forward to continuing our mission of serving youth in the Denver area."

During an interview on Tuesday, the hosts of Fox & Friends tried to understand why Kettleborough was unhappy about the incident.

"Why were you so upset?" host Ainsley Earhardt asked the Kettleborough.

"They were in their visors and their jackets with the name of the restaurant on it," the Cub Scout mom explained. "And that was just kind of strange."

"The [Hooters employees] were wonderful, but the thing that concerned us -- and hopefully you'll agree -- but Hooters and the Boy Scouts don't seem like a natural fit," she added. "So we questioned it with our local council."

"What exactly was your concern?" co-host Peter Johnson wondered. "Was it the way that they usually dress because I see they appear to be covered up [in the photos] or the fact that they serve alcohol or just that it's a restaurant?"

"It's our belief that Hooters is an adult-themed restaurant," Kettleborough replied. "The girls are geared towards adult men, not 7 year olds. So these kids, they can read, they're seeing the logo. They brought in race cars and drivers and the girls and all of these things."

"And my son is seeing the restaurant," she continued. "You know, we go past it there in town and it's fine. And so he's had a really positive experience with the brand now, and we have to explain to him why we don't go there."

That, however, was not an acceptable explanation for co-host Steve Doocy.

"Right, Michelle, apparently the reason the girls were there was because that to pay for the expenses of camp apparently a number of local businesses would donate money," Doocy remarked. "And apparently Hooters decided to go ahead and donate a lot of the money to make your son's camp possible."

"I think there are a lot of people who are looking in on this," the Fox News host said, "people who have taken their families to Hooters in the past. And they say, 'You know, that's -- I don't see a problem with that.'"

"And that's a choice they get to make for their families," Kettleborough pointed out. "We paid for it, it wasn't a free camp. But I think if Boy Scouts were really proud of this particular partnership, they would have told us instead of sort of just letting us find out after the fact."

"I've been to a number of camps," Doocy volunteered. "I can't think of a time the sponsors have been mentioned ahead of time."