Fox immediately makes Munich shooting about U.S. gun laws: 'We're not going to have a country' 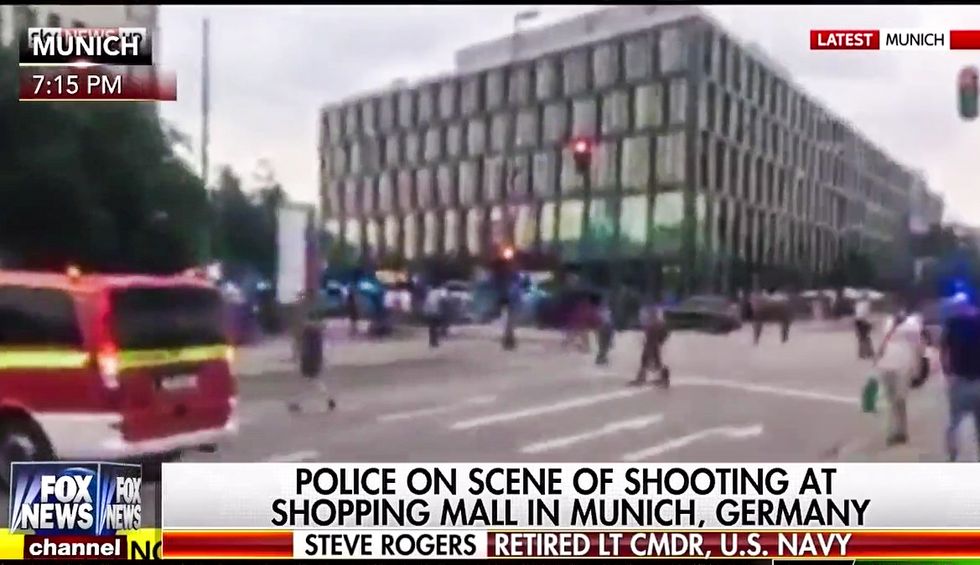 As news was breaking that as many as 15 people had died during a shooting in Munich, Germany on Friday, Fox News suggested that the incident was evidence that gun safety laws were ineffective and put citizens' lives in danger.

"It has all the hallmarks of an ISIS lone wolf-style attack," Fox News host Jon Scott told viewers. "A guy with a gun going to a popular populated place and opening fire."

"This is why we have to take action now," former New Jersey police detective Steve Rogers warned. "The president has to come to grips with the fact that we are at World War III and he has to use military options to deal with ISIS and terrorist groups in the Mideast and get that funding down to the local level.

Fox News host Heather Childers pointed out that "Germany has some of the strictest gun laws in the entire world."

"There's no right to carry in Germany," she noted. "How might this gunman have gotten his weapon?"

"Well, doesn't that go to the point that it's not about guns?" Rogers opined. "Bad guys are going to get guns. We want to disarm the good guys. And how did they get the guns? Well, there's a black market. ISIS and these terrorist organizations are well, well financed. They've got a lot of money. And they somehow someway not only get guns to these people, they can get explosives to them."

The former detective argued that the NSA needed to aggressively monitor social media over the objection of privacy advocates.

"We're not going to have a country left to have any rights to actually exercise," he insisted. "The abilities we took away from the NSA, we better rethink that because we said it once, we'll say it again. They're here. It's not a matter of if, it's a matter of when."