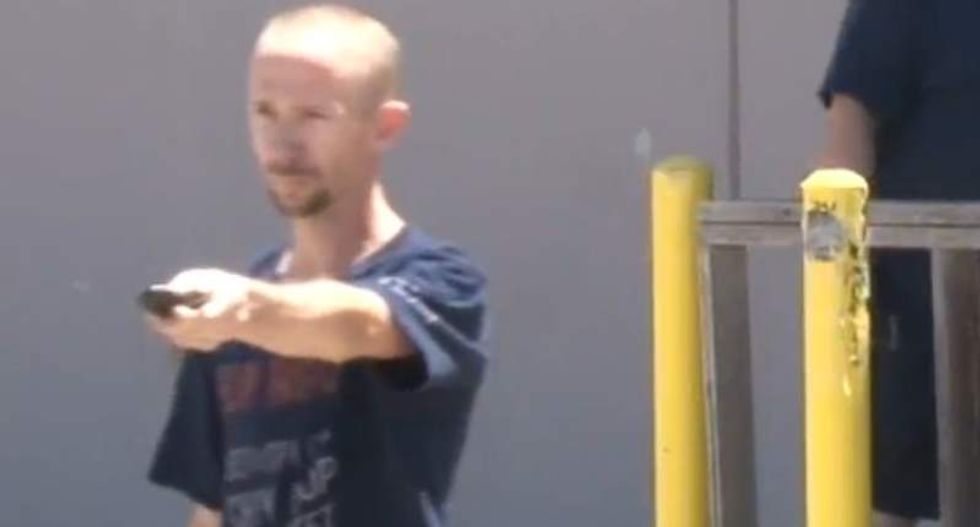 This unidentified man harassed reporter Bianca Graulau and flashed his gun at her for covering his store on July 13, 2016. (KXTV-TV)

An unidentified gun store employee in Elk Grove, California, flashed his gun in response to a report about the store's owner putting a Confederate flag up in front of the store.

KXTV-TV's Bianca Graulau filed a first-person account of her interactions with both the owner of Wild Bill's Old West Trading Co and the worker.

According to Graulau, the flag was put up a year after its presence attracted protests and alleged threats, forcing the owner to remove it. This time, it was accompanied by signs supporting Republican Donald Trump's presidential campaign and a note to reporters, stating, "You know why we fly the flag so there will be no need to speak to anyone about why it's back out. You twist the truth! Also don't enter the store."

She said she did not see the note before she walked into the store, at which point the owner refused to be interviewed. Instead, she went to the parking lot in order to interview customers, which apparently prompted the store to notify police.

However, the responding officers said they could not remove Graulau because the parking lot was open to the public, and allowed her to continue working as long as she was not "interrupting any customers."

In response, the unidentified employee first switched his car alarm on and off repeatedly, walking back and forth from the store to the lot to do so, before bringing a chair out and videotaping her while making sure his gun was visible to her.

When officers returned to the store, she said, the employee tucked his shirt over his gun and joined them, at which point she left the area.

Watch Graulau's report, as aired on Thursday, below.