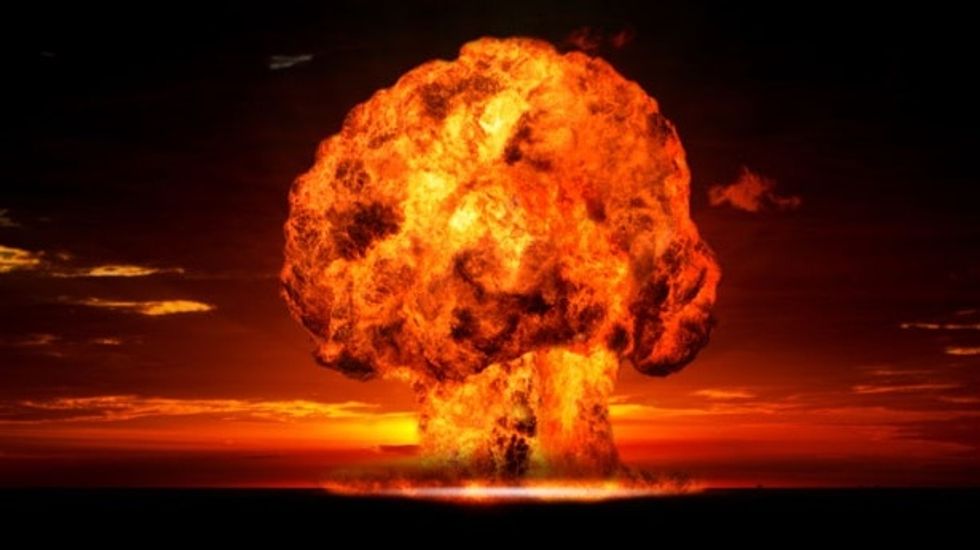 Sunday marked the first anniversary of the Supreme Court’s landmark marriage equality decision, which, if Religious Right activists were to be believed, was to usher in a horrible tyranny that would lead to mass deaths and war.

Of course, the Right’s doomsday predictions about what would happen if same-sex marriage became legal nationwide were totally unfounded, and only a tiny contingent of conservatives came to a protest the ruling in Washington, D.C., this weekend.

While the conservative movement certainly hasn’t given up on the fight against LGBT rights and is thrilled by Donald Trump’s promise to appoint anti-LGBT judges who would oppose the marriage ruling, many activists have once again shown that they are more interested in stirring up fears about the LGBT community than in the facts.

Here are just five of the craziest predictions that conservative politicians and pundits made about Obergefell v. Hodges, all of which are yet to come true.

Many “mainstream” Religious Right leaders said that if the Supreme Court were to strike down state bans on same-sex marriage, Americans should prepare for a revolution.

Family Research Council President Tony Perkins, for example, said there would be an anti-gay “revolution” that would “just break this nation apart” if marriage bans were overturned, warning that such a ruling would “literally split this nation in two and create such political and cultural turmoil that I’m not sure we could recover from it.”

Mat Staver and Matt Barber of the Religious Right legal group Liberty Counsel made similar statements, with Barber declaring that “revolution is at hand” and Staver claiming that there would be a “new American Revolution” resisting marriage equality. Former House GOP Leader Tom DeLay insisted that “all hell” was “going to break loose” if the court sided with LGBT activists on marriage.

“We’ve got to fight to our deaths to save this great country,” said Cliff Kincaid of the conservative group Accuracy In Media, while Vision America’s Rick Scarborough vowed that he was willing to “burn” in defiance of gay marriage, which he said would “unleash the spirit of hell on the nation.”

One year later, no anti-gay revolution has occurred and Rick Scarborough has not self-immolated.

Just before the ruling, WorldNetDaily editor Joseph Farah called on governors “to secede” from the union in order “to offer a refuge” for the “millions of Americans” who he believed would flee the country as a result of marriage equality. “The rewards could be great. I would certainly consider relocating. How about you?” he asked. “If not a state, are there any nations in the world interested in a pilgrimage by millions of Americans?”

Focus on the Family founder James Dobson warned that the U.S. could witness a second civil war over a same-sex marriage decision and televangelist Rick Joyner predicted that the court would “start an unraveling where our country fractures like it hasn’t since the Civil War.”

Self-proclaimed prophet Cindy Jacobs, for her part, said that she and other “prophets” had heard from God about a great “conservative revolt” and a “War between the States” that would take place as states threatened to secede to preserve “biblical marriage”.

Conservative activist Alan Keyes said the ruling amounted to “a just cause for war” and was “likely to produce the separation and dissolution of the United States,” while one author, former Reagan aide Douglas MacKinnon, called on a group of Southern states to form a new country called Reagan that would not tolerate gay rights.

We are still waiting for such a brave governor to threaten secession.

Gay marriage would lead to a divine reckoning, many conservative pundits predicted, possibly in the form of a global financial crash, a nuclear electromagnetic pulse attack or “a fireball from space.”

“It is just a question of how soon the wrath of God is going to come on this land,” televangelist Pat Robertson warned. Florida-based pastor Carl Gallups, now a staunch Donald Trump ally, maintained that “this ruling may prove to be the final death knell of divine judgment upon our once great nation.”

Radio host Rick Wiles predicted that “God will cut off America’s food supply and this nation will be hit with disease, pestilence, drought, natural calamities and a great shaking” and urged people to flee the country.

End Times author Jonathan Cahn even wondered if God would use Hurricane Joaquin to damage Washington, D.C., as a sign of his displeasure with the same-sex marriage decision.

The hurricane, in the end, did not hit D.C.

Following the passage of the 2009 law that expanded hate crime protections to LGBT people, many right-wing politicians and analysts falsely claimed that the act legalized pedophilia. Of course, it did nothing of the sort and child abuse is still a crime.

Many of these same people claimed years later that the Obergefell ruling would also legalize pedophilia, which, obviously, it did not do.

Robertson said the ruling would turn pedophilia into a “constitutional right” and permit “relationships with children” (along with “love affairs between men and animals”).

DeLay warned that the ruling would pave the way for a secret government plan to legalize “12 new perversions, things like bestiality, polygamy [and] having sex with little boys.” Ben Carson, then a GOP candidate for president, suggested that NAMBLA would benefit from the ruling.

Predictions about the government throwing pastors in jail, outlawing the Bible, and even murdering Christians came flooding in after the Obergefell decision.

Mike Huckabee said that America was witnessing “the criminalization of Christianity” and that any pastor who didn’t want to officiate a wedding for a same-sex couple would be liable to face criminal charges:

"If the courts rule that people have a civil right not only to be a homosexual but a civil right to have a homosexual marriage, then a homosexual couple coming to a pastor who believes in biblical marriage who says ‘I can’t perform that wedding’ will now be breaking the law. It’s not just saying, ‘I’m sorry you have a preference.’ No, you will be breaking the law subject to civil for sure and possible criminal penalties for violating the law…. If you do practice biblical convictions and you carry them out and you do what you’ve been led by the spirit of God to do, your behavior will be criminal."

No pastor has been arrested for refusing to officiate a same-sex couple’s wedding, reading from the Bible or preaching against homosexuality, all things that conservatives predicted would happen.

Some right-wing pundits even thought that the ruling would lead to forced gay relationships and parents losing custody of their children.

Many pundits, however, have wrongly used the case of Kim Davis to claim that their fears were realized.

Davis, a Kentucky county clerk, was temporarily incarcerated by a federal judge when she refused to abide by court orders which found that she was unlawfully denying same-sex couples marriage licenses. Davis, who boasted that she was defying the Supreme Court decision and subsequent rulings because she was working under “God’s authority,” was released after deputy clerks in the county office agreed to issue marriage licenses to same-sex couples.

Davis was not incarcerated because of her religious objections but because, in her role as a government employee, she clearly defied the rule of law. She was not attempting to exercise her religious freedom as a private citizen but was trying to impose her personal religious beliefs on the functions of government, and make all the people in her jurisdiction abide by her faith.

As Janet Porter warned in her anti-gay film, “Light Wins,” “our freedoms are on fire.”