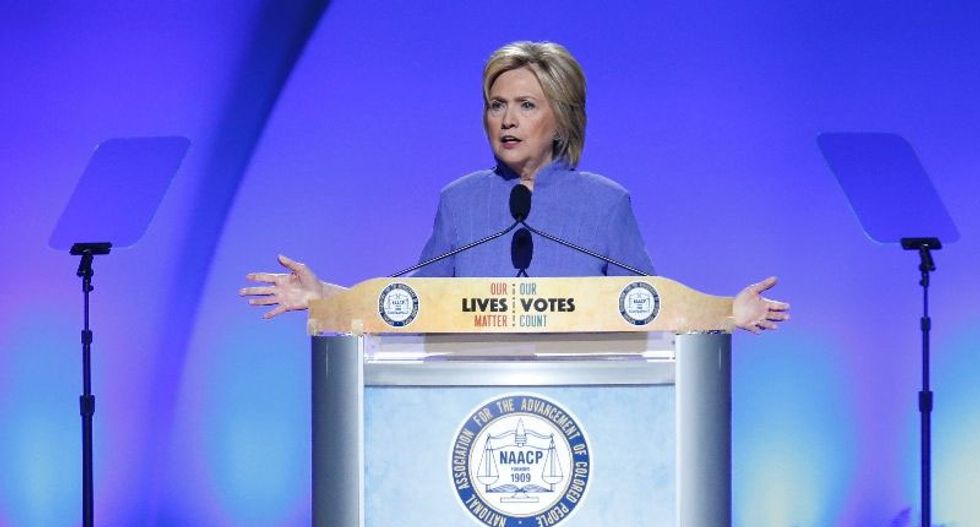 Hillary Clinton sought to wrest the spotlight from the Republican National Convention on Monday, by taking her own campaign to Ohio and telling civil rights activists that Donald Trump cannot become president.

Speaking at the NAACP convention in Cincinnati as the Republican jamboree opened a five-hour drive up the road, Clinton announced a nationwide drive to register millions of new voters to stop Trump.

The former secretary of state, who swept to victory in the Democratic primaries thanks to support from African Americans, painted her billionaire opponent as a threat to democracy, who lacks a policy platform and whose company refused to rent to blacks in the 1970s.

Trump is to be anointed as Republican presidential nominee at the four-day convention in Cleveland by the party once led by Abraham Lincoln, the president who abolished slavery in the 19th century.

Clinton told the conference of the National Association for the Advancement of Colored People, which Trump declined to address, that the Republicans were becoming the party of Trump.

"It is a threat to our democracy and it all adds up to an undeniable conclusion... Donald Trump cannot become president," she said to huge applause and delegates leaping to their feet.

"That's why we've got to work together to get the vote out this fall," she said, announcing a nationwide drive to get three million people registered to vote in the November 8 general election.

It is customary for presidential candidates to address the NAACP convention but the presumptive Republican nominee snubbed an invitation to speak at the Cincinnati event.

The Trump campaign gave no reason, as the candidate's wife Melania prepared to take the stage at the Republican convention later Monday, just 250 miles (400 kilometers) away in the same state.

Ohio is a key battleground state and Trump lost the Republican primary to Governor John Kasich. But a recent NBC News poll put Clinton and Trump tied at 39 percent with 21 percent of voters undecided.

The former US secretary of state used much of her speech to call for criminal justice reform, an end to systemic racism and to denounce the killing of police officers as totally unjustified.

"This madness has to stop," she said in reference to the attack Sunday that killed three police officers in Baton Rouge, Louisiana.

"We have difficult, painful, essential work ahead of us to repair the bonds between our police and our communities, and between and among each other," she added.

"The next president should make the commitment to fight for the reforms we so desperately need, holding police departments like Ferguson accountable," she said to deafening applause.

The 2014 shooting of an unarmed black teenager by a white police officer in Ferguson, Missouri, unleashed widespread protests, some violent, about fatal police shootings. The decision not to indict the police officer prompted more protests across the country.

Her voice cracking with emotion, Clinton also read from the Facebook post of Montrell Jackson, one of the officers killed in Louisiana on Sunday, who spoke of his hurt at being met with hostility when on duty, and viewed as a threat -- as a black man -- when out of uniform.

"We have to heal the divides that remain, make the United States what it should be -- stronger and fairer, more opportunity for every one of our people," she said.

The NAACP gave her a warm welcome on Monday. Members of the audience expressed disappointment that Trump chose to stay away and said Clinton appeared to be the candidate best suited to ending inequality.

MSNBC's Joe Scarborough accused David Perdue of sounding a "foghorn" of racist rhetoric in the closing days of his Georgia gubernatorial campaign.

The "Morning Joe" host was disgusted by the former GOP senator, who has been endorsed by former President Donald Trump, after he hurled a litany of racist attacks against Democratic gubernatorial candidate Stacey Abrams over the weekend.

Quad nations warn against 'change by force' with eyes on China

Leaders of Japan, India, Australia and the United States warned Tuesday against attempts to "change the status quo by force" as concerns grow about whether China could invade self-ruled Taiwan.

A joint statement by the so-called Quad bloc avoided any direct mention of China's growing military power in the region, but left little doubt about where its concerns lie.