'I'm with her!': Stephen Colbert hilariously tries to get onstage at the DNC 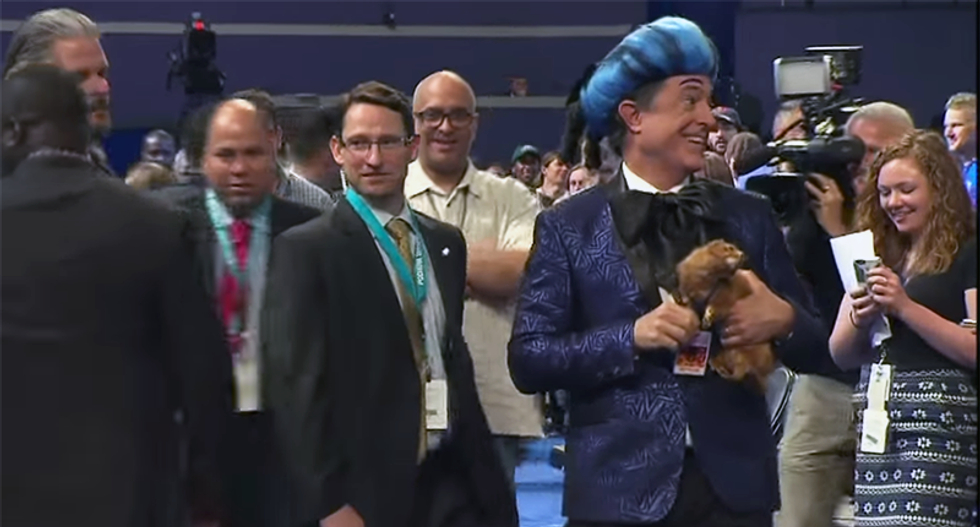 Stephen Colbert created a stir at the Democratic National Convention in Philadelphia when he tried every trick in the book to get on stage and stand behind the podium, but the Secret Service wouldn't allow it.

Dressed in his blue Julius Flickerman wig, Colbert did a special Philadelphia version of the "Hungry For Power Games," with his pet weasel Caligula, who was taxidermied to the nines. Caligula seemed to have a podium pass, but Colbert did not.

After comments about the gender-neutral bathrooms and the gluten-free concession stands, Colbert spotted CNN's Jake Tapper and asked if he'd seen NBC's Chuck Todd. "His goatee did not call my weasel back after they got it on at the convention last week," Colbert said, while Tapper giggled. "Oh yes, they hooked up at the afterparty." Tapper confessed he'd heard Todd's goatee has quite the reputation.

While on the convention floor, Colbert would walk back and forth across the stage as Secret Service agents followed to block him. He would walk one way and then quickly change directions, hoping to throw them off, but each time they'd pivot with him. He enlisted the help of Democratic Minority Leader Nancy Pelosi, who brought her grandchildren down to the hall to stand at the podium, but not even Pelosi could get Colbert on stage.

"No, Mr. Colbert, you're not going onstage," the Secret Service agent told him as he walked with Pelosi.

"I'm with her!" he said, still in Julius Flickerman character.

"She's with the little ones, they're gonna go. You're gonna stay here," he was told.

At one point, Colbert sang a beautiful rendition of the National Anthem with two people he found, still running back and forth across the stage.

Finally, while using a selfie stick to shoot a promotion for CBS, he outmaneuvered the security and made a backwards dash for the stage, doing a barrel roll once up the stairs and ultimately standing in the circle of stars. “God Bless America! God bless freedom of the press! I’m not one to gloat, but I won!” he shouted.

In another unfortunate incident, Colbert spotted a Philly cheesesteak on the ground but wasn't sure if the meat had turned. After taking a bite, he induced a trippy hallucination with 1960s hippies dancing to a creepy, clever song about the convention. "Welcome everyone, to the DNC, a dimension of sights, sound and Hillary," he sang, while Clinton's disembodied head floated on the screen. "You may have felt the bern but now it's time to learn, she is your destiny."

"There's Bernie in a suit he bought at the dollar store, Confetti made of emails staffers shred the night before, Liz Warren disses wealth, O'Malley is a DILF, Bill's on a leash, Joe smokes hasheesh, Michelle can plagiarize herself," he continued.

And check out Colbert's opening to the live show: