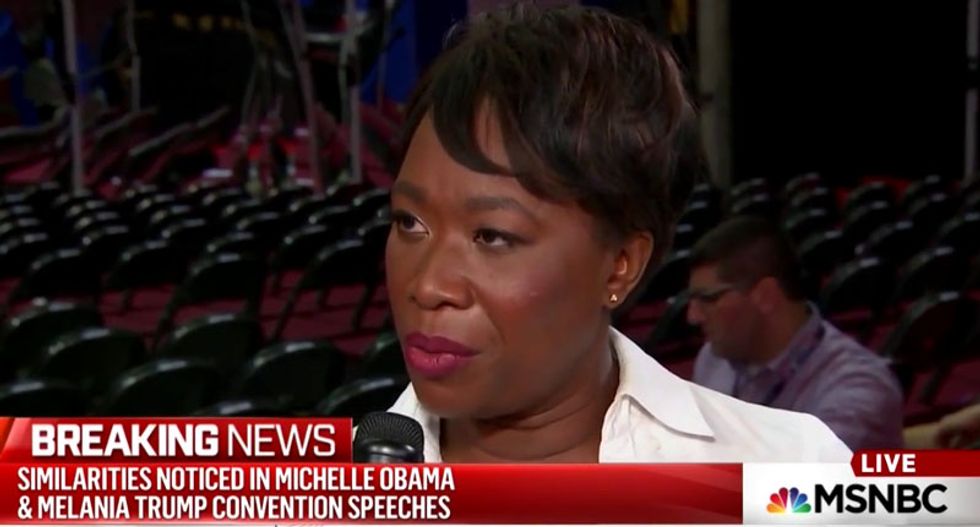 Joy Reid challenged her MSNBC colleagues to not be so quick to excuse the apparent plagiarism in Melania Trump's speech at the opening night of the Republican National Convention. She urged them not to downplay the similarities as the work of disorganized staff, and asked them if First Lady Michelle Obama would have received similar treatment in 2008.

"I'll start by quoting a guy called Tom Nichols, who's a conservative and very prominent on Twitter, who said, 'Ask yourself if Michelle Obama would have been given a pass had she done the same thing in 2008?'" Reid began.

"I think we're all very quickly passing the responsibility onto staff. Clearly, this is a campaign that is poorly staffed. I think that has been clear for a long time. But they sent Melania Trump over to Matt Lauer to say that she wrote it [the speech]."

"She's an adult woman," Reid continued." She's grown up. She has participated in the delivery of this speech. She gave the speech. So I think you have to give responsibilty -- sure, to the staff, the campaign management has been poor here -- but Melania Trump did give the speech and Michelle Obama wouldn't have gotten a pass."

Convention Coverage Media Video
Report typos and corrections to: corrections@rawstory.com.
Like this article ? Text `Support` to 50123 to donate.
READ COMMENTS - JOIN THE DISCUSSION