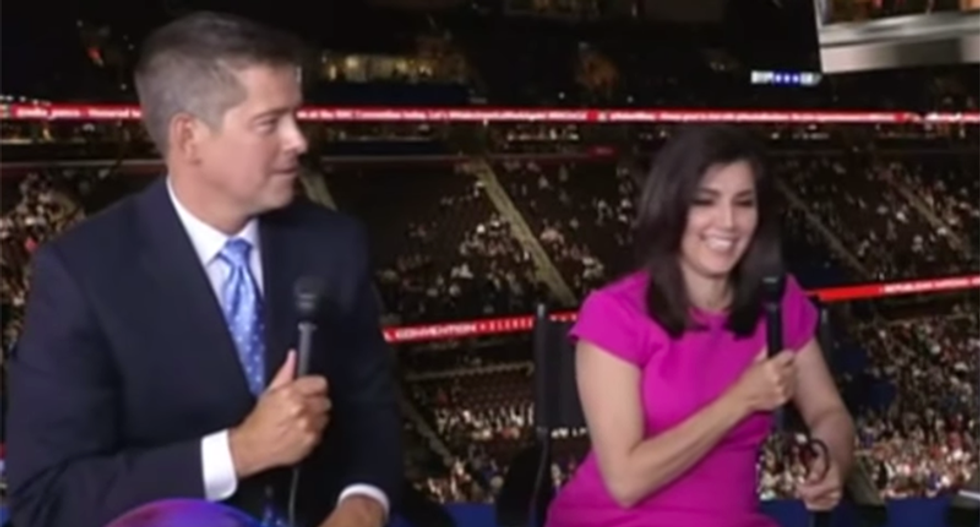 When Melania Trump was caught plagiarizing a speech Michelle Obama made at the Democratic National Convention in 2008, the Republicans rushed to defend her, claiming it was all taken out of context or wasn’t plagiarism. Some even went so far as to cite "My Little Pony" as verification Trump didn't plagiarize.

According to RightWingWatch, Rachel Campos-Duffy, a spokeswoman for the Koch-funded conservative Latino outreach organization Libre Initiative and an RNC speaker said that if anyone plagiarized it was Michelle Obama. According to Compos-Duffy, Obama stole her 2008 speech from “the opportunity message that has been the platform of the Republican Party.”

Her husband, Rep. Sean Duffy (R-WI), blamed the media for the whole ordeal, saying they created a controversy out of nothing.

Campos-Duffy, however, was still in denial. “But I’m not sure, I mean, I’m not sure that she plagiarized,” she said. “I mean, when I saw the two speeches together, I thought, wow, Michelle Obama has really plagiarized the opportunity message that has been the platform of the Republican Party.”

When the host pointed out the specific line for line quote Campos-Duffy dismissed it because it was “pretty generic stuff” and claimed the media was attempting to distract from Melania Trump's physical appearance, which she proclaimed “looked spectacular.”

Duffy is concerned that Trump and his campaign are hitting every pothole and he would prefer they avoid them. “But it goes to the point that Donald Trump has to be better. You can’t open yourself up for these kind of attacks because the media will take them, they’ll run with them, and they’ll run over your story and your message. So be better.”

This is a different tune from one Duffy whistled when doing an interview with TMZ directly after Trump's speech last week. He tried Campos-Duffy's approach of denying the plagiarism, saying, “These are common phrases about family and support of family and ideas about our country, so I don’t think they were so unique a phrase that only a Democrat says it, only a Republican, it’s a lot of common themes that a lot of us share.”