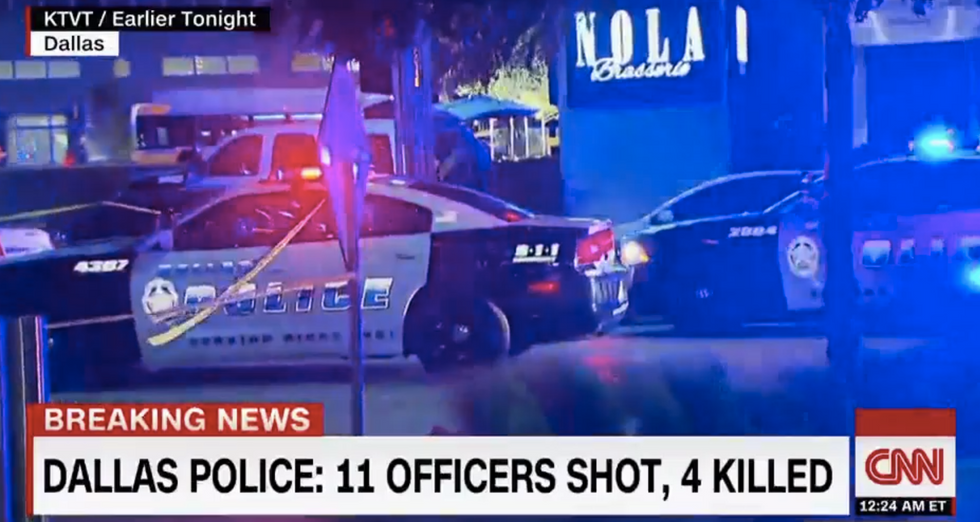 On Thursday morning, Mark Hughes was probably thinking what many others in the Dallas area were. Like hundreds of other concerned citizens, he went to protest peacefully against police shootings after two African-American men were killed in Louisiana and Minnesota this month.

And like many other Texans, Hughes took the opportunity to demonstrate not only his Second Amendment right to "bear arms," but also his state-granted right to open-carry a long gun.

But Thursday night turned into a nightmare that no one expected, when a gunman opened fire at police officers working the protest, killing five and wounding six in what has been described as a sniper attack. The shooter has been identified by authorities as Army veteran Micah Xavier Johnson, 25.

Johnson was killed by an explosive deployed by police. But not before photographs of Hughes, who was in no way involved with the shooting, were spread far and wide by the police, who described him as a suspect.

“Our clients did nothing wrong,” Hughes' attorney, Paul Saputo, told WFAA. “Google their names right now, look at them on Twitter and Facebook. Right now they are accused of the most heinous act that we can imagine -- that changed this city forever. They plastered his picture on Twitter, gave it to the media. The world saw him as a mass murderer. Why?

“Because he was a black man and he had a gun," Saputo continued. "That was a fundamental error and it was grave and it hurt him and it hurt us. It hurt us as a country and it is only going to contribute to where all this is headed -- and it is not a pretty picture.”

A picture of a smiling Hughes, wearing a camouflage t-shirt and carrying a long gun on his side, was circulated by police. The gun, he said, was not loaded. After his picture started circulating, he turned it over to a Dallas police officer, changed his shirt to avoid being mistaken for the shooter, and turned himself in to police.

In the chaos that ensued Thursday night, Hughes' attorneys said police bungled the handling of Hughes, whose rights were violated. Hughes and his brother, Cory, were treated like suspects after being labeled publicly as such, and harshly interrogated. The Hughes brothers were also deprived of their right to have their attorneys present.

“We came credentialed, had our bar cards -- ‘Hey we’re attorneys and we are here for these guys,’” attorney Corwyn Davis told WFAA. “And we got the runaround. At one point we were threatened with arrest. One officer even unholstered. So they were ready.”

As of Friday, even after Dallas officials announced that Hughes was innocent, the tweet naming him as a suspect with his picture hasn't yet been deleted by the police department. It has been retweeted 41,000 times.