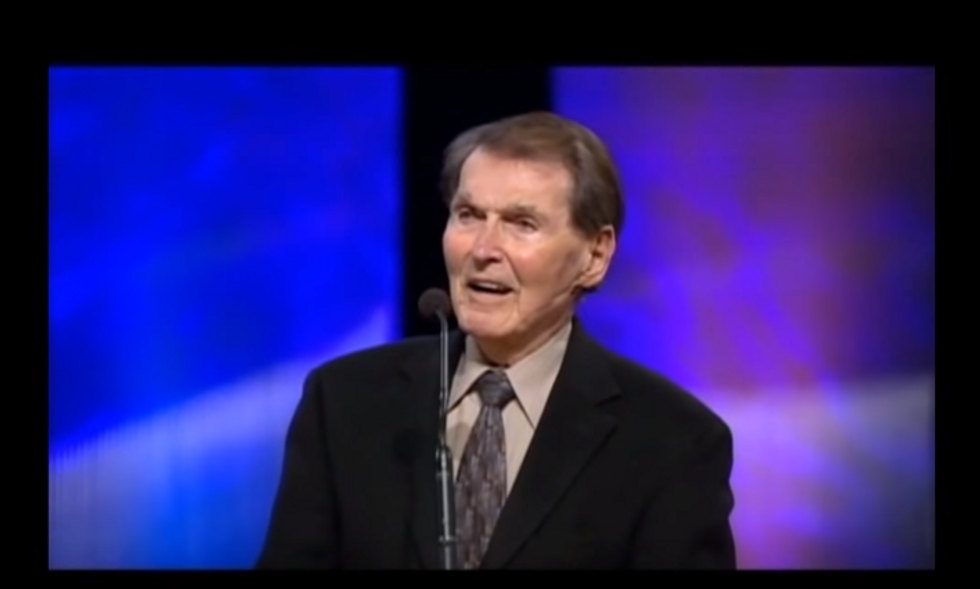 Tim LaHaye, evangelical leader and best-selling author of the Left Behind series died earlier today, July 25, 2016 after suffering a stroke. He was 90. LaHaye had made a career out of preaching a version of Christianity that saw gay people as monsters and Catholics as pagans among other views. Here is a list of reasons that Raw Story suspects he may be "left behind" should the Rapture turn out to be anything more than a fictional event.

1. LaHaye was prompted to write his best-selling book series after judging others' behavior. At LaHaye's bio page,  he explained that he was prompted to write the first book in the series of Left Behind novels, which tell the story of a post-apocalyptic world where Christ has selected deserving Christians in the Rapture and left behind those who sinned, after observing a couple flirting.

"Dr. LaHaye said the idea for the apocalyptic series came during a flight when he noticed a married pilot flirting with an attendant. The incident prompted the minister to wonder what would happen to the pilot if the pre-tribulation rapture came at that moment."

2. LaHaye was convinced that gay people were not "gay," but could only live lives of misery. In 1978, LaHaye penned a book entitled The Unhappy Gays. In a review published in Bookslut, LaHaye's views of the unhappy gay "lifestyle" were described as:

For the record, LaHaye doesn't actually approve of the word "gay." Or at least he didn't in 1978. The third chapter of The Unhappy Gays is titled, seriously, "Gay It Isn't!" LaHaye explains: "Not many years ago 'gay' meant 'fun' and was a word utilized by all kinds of people....It costs the taxpayers of California approximately $20 million a year to treat homosexuals for VD. Taking massive doses of penicillin to cure VD certainly is not gay!" Uh, I guess not. LaHaye goes on to list "sixteen reasons why 'gay' isn't gay." These include loneliness, guilt, selfishness, depression, and my personal favorite, "vulnerability to sadism-masochism." LaHaye's image of gays seems to have been wholly informed by those horrible '70s melodramas about the evil dark side of the gay world. Think Al Pacino's Cruising -- which, in fairness, was released after LaHaye's book was published.

3. He was one of the founding members of the Moral Majority. The right-wing Christian political organization was founded by Jerry Falwell, Tim LaHaye, and Greg Dixon. Among the campaigns that the Moral Majority was associated with included supporting Anita Bryant's campaign to discriminate against gay people in Florida, and running evangelist Pat Robertson for president.

4. LaHaye dismissed Catholicism as a "false religion." He was removed as chair of the Jack Kemp presidential campaign in 1988 after just four days when his anti-Catholic views came to light. LaHaye had founded a mission to Catholics that was virulently anti-Catholic and sought to convert them to evangelical Christianity.

Writing about Pope John Paul II, LaHaye and his co-writer for the Left Behind books were described as believing:

The present pope," the pair assert, "is on record as believing in the Trinity and may indeed pray in the name of Jesus Christ. However, his infatuation with the vision of Fatima and his reverence for Mary (whom he credits with saving his life from an assassin's bullet) concerns some who fear he could be setting up his church and the religions of the world for the fulfillment of Revelation 17, where the 'Mystery Babylon, the mother of harlots,' unifies all the religions of the world during the first half of the Tribulation."

5. He believed that the "Illuminati" controlled worldly events. According to an article published by the organization "Americans United for the Separation of Church and State," LaHaye wrote in one of his books:

In Rapture Under Attack, LaHaye writes, "I myself have been a forty-five year student of the satanically-inspired, centuries-old conspiracy to use government, education, and media to destroy every vestige of Christianity within our society and establish a new world order. Having read at least fifty books on the Illuminati, I am convinced that it exists and can be blamed for many of man's inhumane actions against his fellow man during the past two hundred years."