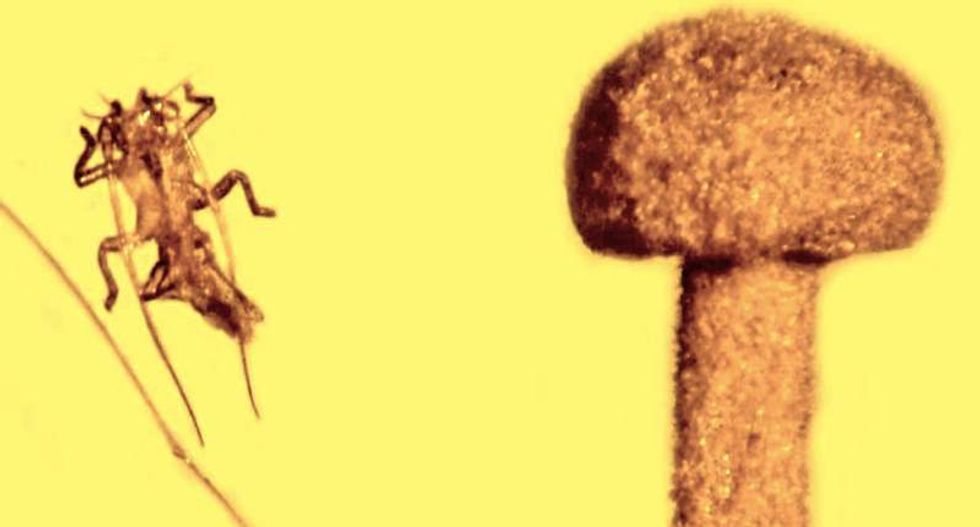 The exoskeleton or skin of a tiny insect, similar to a "walking stick" is shown beside a mushroom entombed in amber fossil which is dated from about 50 million years ago. (Photo courtesy George Poinar, Jr/Oregon State University/Handout via REUTERS)

A chunk of amber found along the Baltic Sea in Russia provides evidence roughly 50 million years old of an extremely fortunate bug.

An Oregon State University scientist on Thursday described a remarkable piece of amber -fossilized tree sap - containing a mushroom, a strand of mammalian hair and the recently shed exoskeleton of an insect that got away from the oozing sticky stuff in the nick of time, escaping eternal entombment.

that helps keep them safe from hungry birds and other predators.

The amber memorialized a little scene that unfolded in an ancient subtropical forest of evergreen trees roughly 15 million years after the dinosaurs went extinct and mammals began to assume their new position as Earth's dominant land animals.

"The mushroom was growing at the base of a tree," Oregon State entomologist and amber expert George Poinar said. "The insect was exploring the mushroom and getting ready to feed on it. A rodent came along, bit off the stem of the mushroom at the same time some resin from the tree was flowing down toward the mushroom."

"The resin caught the feet of the insect that was probably ready to molt and decided that this was a good time to leave its skin and flee. So now we have the rodent hair and the skin of the insect together with the prize mushroom in amber," he added. "Gourmet chefs should not get too excited about this find since the mushroom is way to small for an omelet."

Numerous creatures been found entombed in amber including insects, lizards, amphibians, mammals and birds, as well as plants including flowers. They are sometimes beautifully preserved and offer unique insight into ancient animals and plants.

"Finding insects and plants together creates a mini-event and shows interactions of the past that we couldn't determine by finding them separately," Poinar said.

The insect was the type that would have shed its exoskeleton over and over before becoming an adult and likely lived just a couple months. It is clear that the exoskeleton trapped in the amber had been recently shed because it contains fine strands that would not longer be present if it had molted a significant amount of time before being overtaken by the sap.

The research was published in the journal Fungal Biology.