Michelle Obama does carpool karaoke with Missy Elliott — and it's awesome 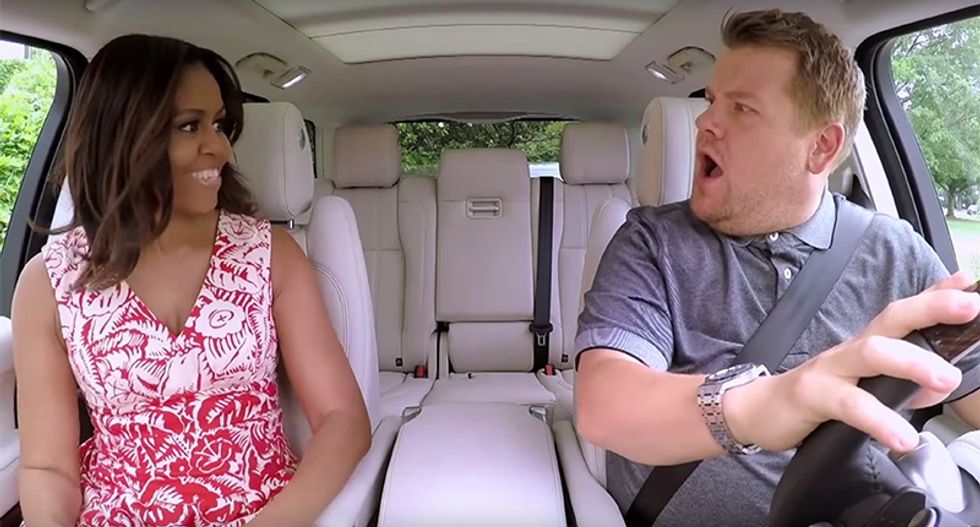 After much anticipation, the episode of James Corden's "Late Late Show" featuring First Lady Michelle Obama has finally aired. Despite Michelle Obama singing songs from other artists while in the car, no staffer will be fired.

If there's one thing you learn living in Washington, DC, it is that you never drive anywhere near the White House. Nevermind the overflow of tourists that make it impossible to turn left, the motorcades that will block you from moving for at least half an hour, or Vice President Joe Biden doing donuts in his Corvette, now there's a very serious danger: Teenager Malia Obama is learning to drive. As Corden found out, it's best to just put your hands up and try not to move.

Mrs. Obama sings rather well and has some pretty slick moves, as we saw during Obama's car dance to Beyoncé's "Single Ladies (Put a Ring On It)."

But the Q&A between the two is certainly the more important piece. Obama explained to Corden that after so many years she will miss the people she sees each day at the White House, but the 24-hour room service was a little too much. "That's nice, but the freedom that we'll get in exchange for the privileges and the luxuries — you know, seven and a half years, that's enough luxuriating. I can make my own grilled cheese sandwich," she said.

At one point Missy Elliot gets in on the action, climbing into the back seat to jam, "This Is For My Girls," which she recorded for Obama's international "Let Girls Learn" initiative. Just when you thought it couldn't possibly get any better, the two rocked out to "Get UR Freak On."

Obama also revealed that her Secret Service code name is "Renaissance" and that President Obama's is "Renegade," she said, and despite your best intentions, protectees don't get to pick the first letter of the code name, however, one does have the right to veto the ones picked.

Some of the best scenes below came from the Secret Service, who were in on the fun as well.